Canadian Dollar Technical Analysis: Will BOC Give Lift to Loonie? – Levels for CAD/JPY,

Nearly a month removed from the Canadian federal election has passed, and with inflation continuing to run above expectations, it seems likely that the Bank of Canada will soon restart its stimulus withdrawal efforts when it meets tomorrow. Currently, asset purchases are running at a rate of C$2 billion per week. Following the superb September Canadian jobs data and surging energy prices– energy accounts for approximately 11% of Canadian GDP – there is reason to believe there is less slack in the economy than anticipated mid-year. A hawkish BOC is thus anticipated. The anticipated, brief pause in the Canadian Dollar’s otherwise strong October run may soon be over, giving way to the Loonie taking flight once more. 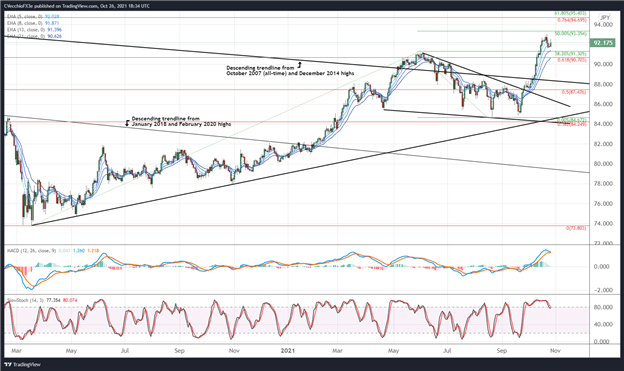 Last week it was noted that “the shooting star candle on the daily timeframe see traders selling CAD/JPY on rallies above 92.50, with wicks forming above said level each of the past three trading sessions. If a return back to the daily 5-EMA is in the cards before continuation higher, then CAD/JPY could fall back below 92.00 in the coming days.” CAD/JPY rates bottomed at 91.65 last week before they started climbing this week again.

It now appears that a morning star candlestick pattern is emerging on the daily timeframe – a bullish bottoming signal. CAD/JPY rates are regaining their bullish posture on a momentum basis, with the pair back above its daily 5-, 8-, 13-, and 21-EMA envelope, which is in full bullish sequential order. Daily MACD remains well-above its signal line, and daily Slow Stochastics appear on the cusp of turning higher back into overbought territory.

Having based above the former yearly high, CAD/JPY rates may now be ready to test the 50% Fibonacci extension of the March 2020 low/May 2021 high/August 2021 low range at 93.35 in the coming days – perhaps before the end of October. 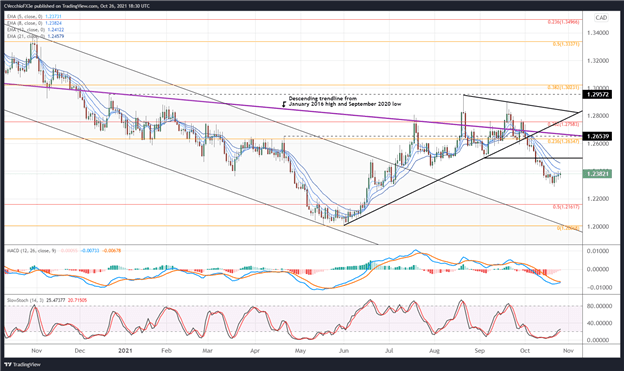 In last week’s update, it was observed that “the hammer candle suggests a reversal higher may be coming; a round of profit taking for shorts after breaking below the September low.” USD/CAD rates were trading near 1.2359 at that time; they are currently situated at 1.2382. The rebound, ever so brief, may simply be setting up “another opportunity to sell USD/CAD rates as the momentum structure remains bearish,” as noted last week.

USD/CAD rates are still below their daily EMA envelope, which remains in bearish sequential order. Daily MACD continues to hold below its signal line, while daily Slow Stochastics have barely climbed out of oversold territory. It remains the case that “deeper losses should be anticipated over the coming weeks.” 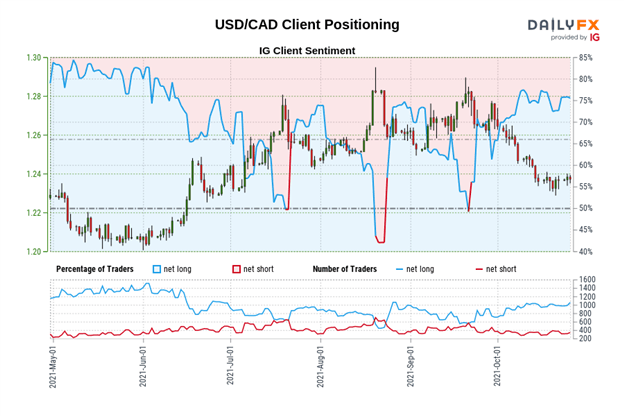 We typically take a contrarian view to crowd sentiment, and the fact traders are net-long suggests USD/CAD prices may continue to fall.

Positioning is less net-long than yesterday but more net-long from last week. The combination of current sentiment and recent changes gives us a further mixed USD/CAD trading bias.

Forex Signals Brief for May 20: Risk Sentiment Keeps Switching On & Off

Forex Trading Tips to use during the crisis

Euro Caught in US Dollar Crosshairs as Volatility Grips Markets. Will EUR/USD Visit…