Apple’s 14 and 16-inch MacBook Pro models are finally in the hands of customers, and one Reddit user has opened his up to give us a first look at the inside of the 10-core 14-inch machine. 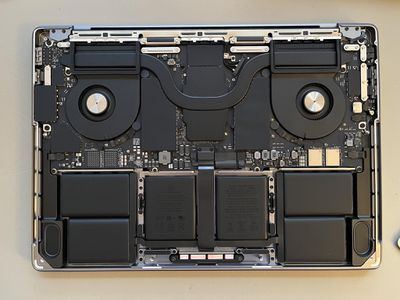 In addition to sharing some great photos of the internals, Reddit User the_Ex_Lurker shared some thoughts on the process of getting into the new MacBook Pro.

Opening up the new MacBook Pro “seems identical” to the 2016-2012 MacBook Pro models, with Apple using pentalobe screws and clips that need to be dealt with to get inside. The batteries are not glued down and are instead held in place with iPhone-style adhesive pull tabs to make battery replacements simpler. 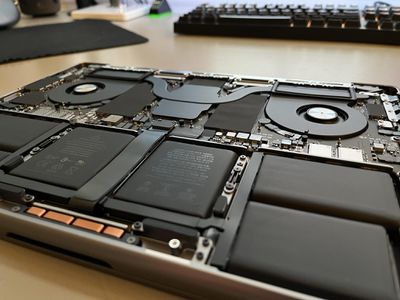 The keyboard deck is part of the unibody so it won’t be any easier to replace than existing keyboards, and the I/O ports are modular and should be relatively easy to replace. There is a dual fan setup inside the 14-inch model like the 16-inch model, and the fans are slightly larger than the fans in the old 13-inch MacBook Pro but are smaller than the fans in the 15-inch 2016 model.

Leaker L0vetodream also shared some teardown images of the 16-inch MacBook Pro model on Twitter. He said the M1 Max chip is “really large,” with the top down view showing off the dual fans and heat pipe. A translation of the original tweet is below with more detail. 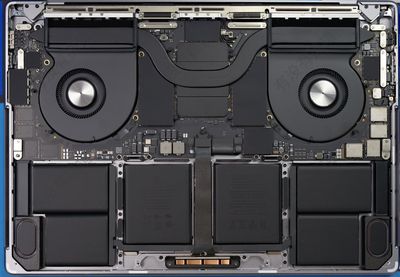 MacBook Pro 16-inch with M1 Max first disassembled. The area of ​​the new M1 Max chip is really large (see the comparison of the size of a 1 yuan coin) RAM is divided into four particles stacked on the chip to dissipate heat is a dual fan + single heat pipe overall modularity The design of the internal design is regular and maintenance is relatively convenient. This one we have is the 1T top-equipped version (the highest configuration in the non-customized version).

Both the 14 and 16-inch models look similar inside with the dual-fan setups and a set of six batteries, along with redesigned speaker systems. 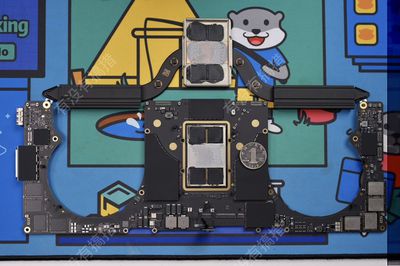 We should get a more in-depth teardown later this week from teardown site iFixit, which will give us additional information on the two machines.

Apple unveiled new 14-inch and 16-inch MacBook Pro models earlier this week, and the first real-world photos of the notebooks have surfaced.
YouTube creator Luke Miani tweeted the above photo of the 14-inch MacBook Pro next to the previous-generation 13-inch MacBook Pro, providing a real-world look at the notch at the top of the display, all-black keyboard design, and more. As noted by…

Apple today announced completely redesigned 14-inch and 16-inch MacBook Pro models that in the case of the 16-inch model is unsurprisingly thicker and heavier than the previous generation.
Apple announced a new 14-inch model that replaced the high-end Intel 13-inch MacBook Pros. Given the larger screen, it’s not fair to compare the two models. What is fair game, however, is to take a look at …

Apple today announced new 14 and 16-inch MacBook Pro models with M1 Pro and M1 Max Apple silicon chips, and the new machines come with higher than expected price tags. The 14-inch model starts at $1,999, while the 16-inch model starts at $2,499. There are upgrades available for the chip, SSD, and memory upgrades depending on the model.
A fully maxed 16-inch MacBook Pro tops out at…

Ahead of an official launch later this week, new images sent to MacRumors show the new 14-inch MacBook Pro on display at an Apple Authorized Reseller, offering us an even closer look at Apple’s entirely revamped MacBook Pro.
The new 14-inch and 16-inch MacBook Pros were by far two of the most highly anticipated and talked about Apple product releases of the entire year. Now that Apple has…

A new video posted to YouTube today offers viewers perhaps the best real-world look yet at Apple’s latest 16-inch MacBook Pro. Update: The video has been removed.
The eight-minute video, narrated in Vietnamese, shows the new MacBook Pro’s display notch, thinner bezels, full-size keyboard, and additional ports in close-up, as well as the thicker design, all of which are compared side by…

New MacBook Pro models are expected to be announced on Monday at Apple’s “Unleashed” event, bringing some of the biggest improvements to the product line to date, including some surprising changes, so any prospective MacBook Pro buyers should wait for the new devices to come out.
According to our full feature breakdown aggregated from our coverage from a wide range of sources, including…

Apple has nixed all of the Intel MacBook Pro models from its MacBook Pro lineup, with the prior-generation Intel i7 and i9 machines now discontinued.
All of Apple’s MacBook Pro models now feature M-series chips as the company continues to phase out Intel chips. That means Apple’s entire portable notebook lineup (the MacBook Air and MacBook Pro) is Intel-free and running Apple-designed chips.
…

Nintendo Is Offering Free Trials For Switch ﻿Online, E﻿ven If You’ve Used One…

Chromebook 101: how to customize your Chromebook’s desktop

Steam Deck’s Latest Update Is Sure To Stir Debate