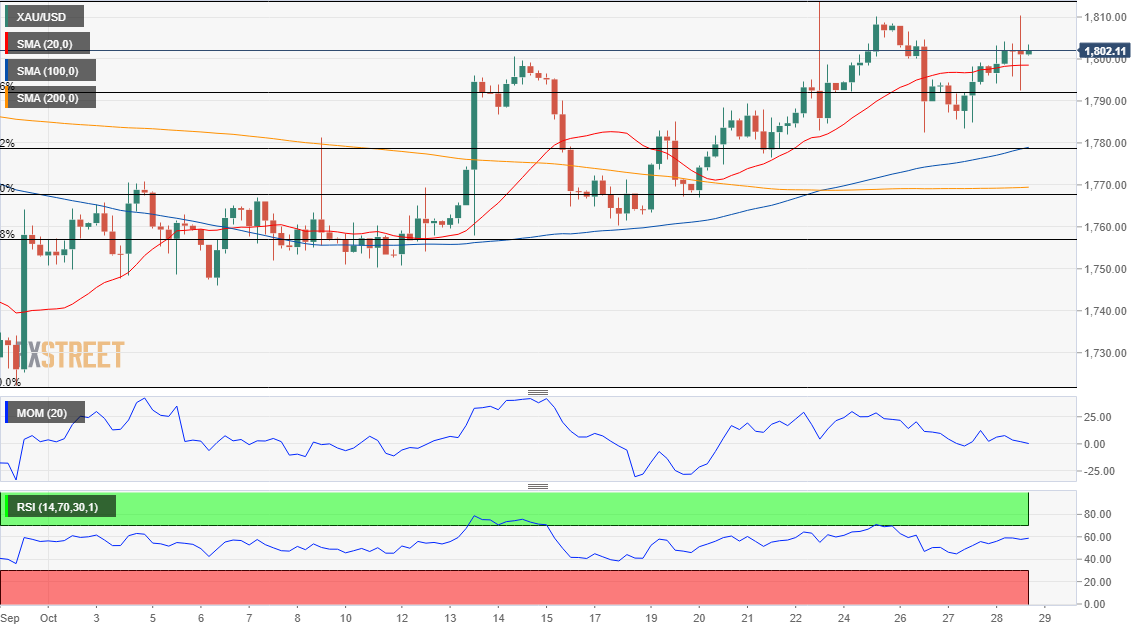 Spot gold trades around $1,802 a troy ounce, up amid a dollar’s sell-off following dismal US macroeconomic data and concerned European policymakers. The US published the preliminary estimate of its Q3 Gross Domestic Product, which showed the country grew a measly 2% in the three months to September, missing the expected 2.7% and well below the previous 6.7%.

On the other hand, the European Central Bank announced its decision on monetary policy. As widely anticipated, the monetary policy was left unchanged, and President Christine Lagarde tried to maintain its conservative stance but sabotaged herself. She repeated that policymakers believe inflation will soon recede, indicating that it’s the result of higher energy prices and supply chain bottlenecks. However, when asked about what they discussed these days, she answered “inflation, inflation, inflation,” letting markets know that they are far more concerned about higher prices than what they express in their statement.

The market reacted alongside Wall Street’s opening, as US indexes welcomed the poor GDP figure, hinting at a slower tightening pace from the US Federal Reserve. Gold advanced, but its gains were modest compared to other dollar’s rivals.

From a technical point of view, XAU/USD could extend its advance heading into the weekend. The daily chart shows that the bright metal is meeting buyers around the 23.6% retracement of its latest daily advance, while a flat 200 SMA converges with the Fibonacci level. The 20 and 100 SMAs remain below the longer one, with the shorter maintaining its bullish slope. Additionally, technical indicators are posting modest advances after a period of consolidation, holding well into positive levels.

Gold is neutral-to-bullish in the near term and according to the 4-hour chart. The bright metal is currently developing above a flat 20 SMA, still hovering around it. Meanwhile, technical indicators lack directional strength, the Momentum around its midline and the RSI at around 57. The bright metal needs to break above the monthly high at 1,813.80 to gain bullish traction and extend its rally to 1,833.95, September monthly high.

View Live Chart for the XAU/USD

Gold Rate Today: Prices continue to fluctuate during wedding season. Know what you…

Sentiment shows gold price has the momentum to move solidly above $1,800

What just happened to gold and silver prices… And what didn’t!

Top 3 Gold-Price-Linked Cryptocurrencies to Watch For in 2023

‘No evidence at the time’ of foreign interference in 2019…

Trump: Constitution should be terminated due to “massive”…