The EUR/JPY has moved towards two-week lows as important support appears to be under siege currently, and presenting a speculative opportunity for traders.

The yen is a popular asset during turbulent times.

The EUR/JPY has moved lower in early trading today as the specter of announcements from the Bank of Japan and the European Central Bank cast shadows. While this may cause short-term nervousness among speculators, unless there is a major surprise from either central bank, this may turn out to be a non-event. The current price ratio of the EUR/JPY is near the 131.650 area and trading remains rather intriguing for speculators who may believe the Forex pair has been slightly oversold in recent trading.

On the 19th of October, the EUR/USD was near the 133.500 mark and the last time the Forex pair traded above this juncture was in June of this year. While there has certainly been a slight selloff in the past week of trading, the EUR/USD remains within the upper elements of its mid-term price range. Important support is certainly being challenged, but if the 131.250 to 131.100 levels prove durable this may be ammunition for bullish speculators who believe another leg up will develop sooner rather than later.

Short-term momentum is being affected by nervous sentiment being generated from the potential of a change in central bank policy, but both Japan and Europe are not likely to shift their positions. Both of these central banks can be defined as rather reactive, instead of proactive and that is not meant as a compliment. If the ECB comes out with a rather passive announcement later today, the EUR/JPY could see a bullish reaction occur.

Technically, the EUR/JPY has resistance near the 131.850 to 132.100 levels, but if these marks are challenged and are penetrated higher another move upwards could emerge. Cautious traders may want to wait for more selling to take place within the EUR/JPY and see support levels tested before they try to engage in reversals higher. The EUR/JPY can move quickly and risk management is necessary.

Buying the EUR/JPY near the 131.600 level could prove to be a rather interesting long position. Traders should be aware that there will be additional volatility, particularly as the ECB makes their policy pronouncements later. However, buying the EUR/JPY today seems like a rather intriguing speculative wager if an order can be positioned near current support levels. Because of the volatility that will likely be seen today, take profit and stop loss orders are highly recommended. 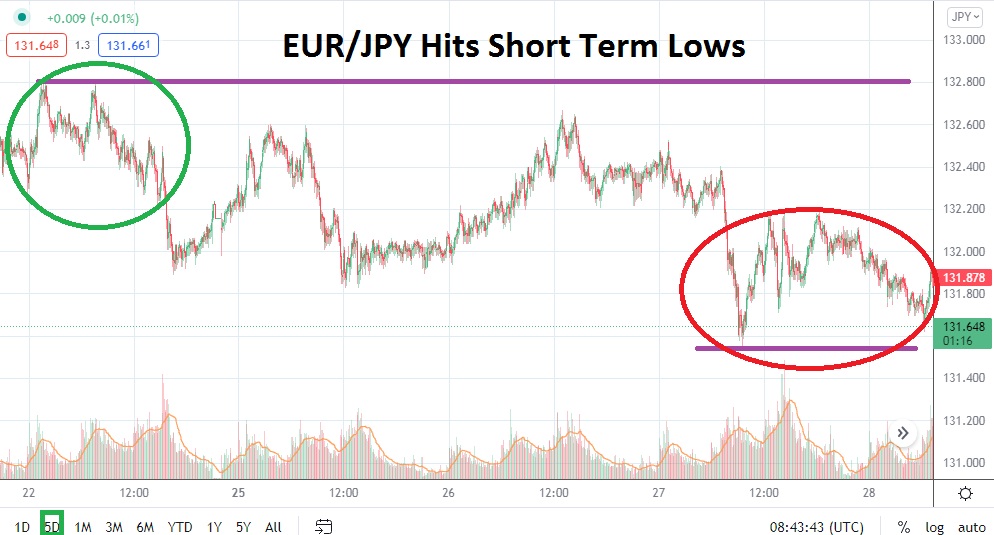 New To The Forex Market? The Ultimate Toolkit For Success

What to Look for When Choosing a Forex Broker

Whipsaws Ahead of US PCE Data

‘No evidence at the time’ of foreign interference in 2019…

Trump: Constitution should be terminated due to “massive”…

‘They Can Totally Undo Him’: A Freedom Caucus Founder…