Colin in Black and White Series Premiere Recap: Thug Hair — Plus, Grade It!

Hair is a big part of the Black identity. So it only makes sense that the premiere episode of Netflix’s limited series Colin In Black and White would unpack how former NFL quarterback Colin Kaepernick sees his tendrils, and where and how his hair journey began.

When the drama debuted Friday, a young Colin (The Bug Diaries‘ Jaden Michael) was shown eagerly grasping at all things Black because there weren’t a lot of people who looked like him in his small Central California town. His adopted parents were also well-intentioned but white and could do little to help teach their biracial son about Black culture.

His buddy told him about the high school girl who braided his hair, inspiring Colin to pay her a visit. But the girl was inexperienced and even ran out of hair grease at one point. When she finally finished Colin’s hair, it was so tight he could barely sleep. Making matters worse, his adopted mother Teresa (Weeds‘ Mary-Louise Parker) didn’t like his hair and didn’t know what to make of it.

Adopted father Rick (Parks and Recreation’s Nick Offerman) tried to be a little more open-minded, but he too struggled with what to say and think about the hairstyle. The braids only ended up lasting one day, and after a headache-riddled Colin got home from school, he took down his cornrows and practically fell asleep at the dinner table. 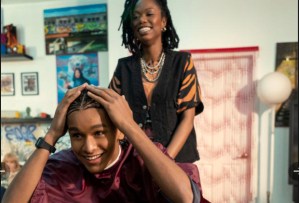 Desperate to help her son figure out his hair path, Teresa awkwardly turned to her Black coworkers to find a licensed stylist who could braid Colin’s hair the right way. An understanding woman at work sympathized with Teresa’s cultural ignorance and told her about a place she could take Colin in the Black part of town.

Teresa took him and looked uncomfortable and overwhelmed, but she kept trying as his braider Erica (Black Monday‘s Xosha Roquemore) peppered her with information and tips on what haircare products to buy and how to care for Colin’s scalp. These braids were less tight and lasted much longer, and when Colin had worn the style so long that his cornrows became frizzy and a little dusty, Teresa took her son to Erica again.

This time, Erica did his hair at her house, and Teresa was overwhelmed by that, too. For instance, when Erica and her girlfriend made Colin a plate, Teresa took offense when he said their food didn’t need seasoning the way hers did. Ouch. Erica also started playing hip-hop music, and that put Teresa on edge as well. 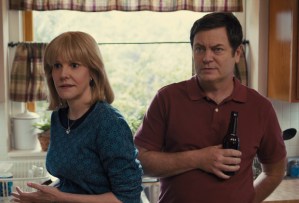 But the final straw came when Colin’s bigoted baseball coach called Teresa and said Colin’s hair made him look like a thug and he would have to cut it to continue playing for the team. Teresa and Rick, who also thought Colin looked like a thug, made their son cut his hair, and it broke his heart.

“I didn’t have the knowledge, wisdom or language to fight back,” the real Kaepernick intoned before revealing that it would be another 14 years before he got his hair braided again. “But I do now.”

What did you think about Netflix’s Colin in Black and White? Grade the limited series premiere in our poll, and drop your thoughts in the comments.

Pricey gourmet ingredient is a daily snack for these forest birds

Every movie and T show being removed from Netflix this month

Netflix Ranked Last in Streamer Satisfaction According to Survey

Sea Shanties Are Back With “Captain Crow” From Netflix’s ‘The…

Adam Sandler just made the best basketball movie of all time

Victims of Netflix doc’s alleged ‘Tinder Swindler’ have united for this reason:…

The Best Movies and TV Shows Coming to HBO, Hulu, Apple TV+ and More in July