Explained: Why China is cracking down on construction of super skyscrapers

Home to some of the world’s tallest buildings, China is now cracking down on the construction of ‘super skyscrapers’ in smaller cities across the country. The country’s strict new laws impose restrictions on the height of buildings based on the population density of different cities.

Interestingly, this is not the first time Chinese regulators have taken steps to limit the construction of skyscrapers. For instance, earlier this year, authorities banned what they called “ugly architecture”.

There is already an existing ban on buildings taller than 500 metres.

So, why did China decide to impose restrictions on the height of buildings?

The latest guidelines limiting the height of super-high buildings is part of a larger crackdown on “vanity projects” in the country. It also aims to reduce China’s energy consumption.

Many have argued that in low-density cities massive skyscrapers are merely impractical vanity projects. The Chinese government’s latest move was widely hailed by users on social media platform Weibo, according to BBC.

What are the new rules?

As per the country’s strict new rules, skyscrapers taller than 150 metres (490 ft) will be strictly limited, and those higher than 250 metres (820 ft) will be banned for cities with a population of fewer than 3 million.

In cities with over 3 million people, authorities have also decided to limit structures taller than 250 metres.

According to a statement issued jointly by the Ministry of Housing and Urban-Rural development and the Ministry of Emergency Management, builders will require special exemptions to construct skyscrapers higher than 150 metres in a city with an urban population of less than three million. However, buildings higher than 250 metres will not be permitted under any circumstances.

Similar rules apply in cities with an urban population of over three million. Special permission may be granted to construct buildings taller than 250 metres, but with a hard ban on skyscrapers over 500 metres.

Those who violate these new rules “will be held to lifelong accountability”, the statement added.

What are some of the rules China has previously imposed?

In July, China imposed a ban on the construction of skyscrapers exceeding 500 metres in height. Highrises over 250 metres were also strictly limited. The government said that exemptions would only be granted after close assessment of building plans. 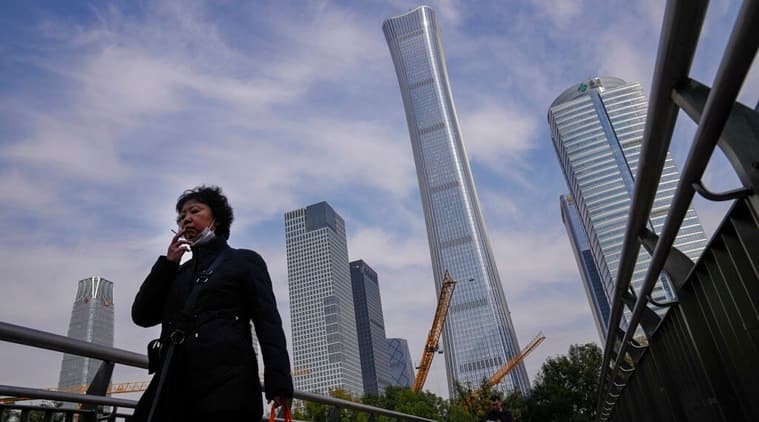 A woman wearing a face mask smokes as she walks by construction cranes stand near the skyscrapers at the Central Business District in Beijing. (AP)

Authorities were focussed on ensuring the safety of these buildings. This summer, the regulator tightened rules for buildings taller than 100 metres. These buildings are required to have stringent anti-earthquake and firefighting capabilities. They also require adequate escape and rescue mechanisms.

This comes after several high-rise buildings reported accidents in recent years. Notably, in March, a fire broke out in a particularly tall residential building in the northern Chinese city of Shijiazhuang, the Guardian reported. Months later, a similar incident occurred in the cit of Dalian.

The rules are particularly pertinent as China is home to some of the tallest buildings in the world. These include the 128-storey Shanghai Tower, the country’s tallest building, as well as the 599.2 metre Ping An International Finance Centre.

In 2019, China’s National Development and Reform Commission (NDRC) announced that it would prohibit the construction of “ugly buildings”.

“We’re in a stage where people are too impetuous and anxious to produce something that can actually go down in history,” Zhang Shangwu, deputy head of Tongji University’s College of Architecture and Urban Planning had earlier told the South China Morning Post.

“Every building aims to be a landmark, and the developers and city planners try to achieve this goal by going extreme in novelty and strangeness.”

Read More: Explained: Why China is cracking down on construction of super skyscrapers

What you need to know about China-Taiwan tensions

Is the PLA troop mobilisation for Taiwan emergency real?