October 31, 2021 – While he was unlucky in the Moscow final last week, Marin Čilić has gone on to win the St. Petersburg Open title for the second time in his career!

After reaching the final in Moscow last week, in which he lost to Aslan Karatsev, Croatian tennis player Marin Čilić today defeated American tennis player Taylor Fritz in the final of the St. Petersburg Open on Sunday (7:6, 4:6, 6:4) and won his second ATP tournament this year!

This is Čilić’s 35th appearance in the final of an ATP tournament, and the third in 2021. He won Stuttgart in June, his 19th title, while he lost in the Moscow final last week. This makes it his jubilee 20th title of his career! 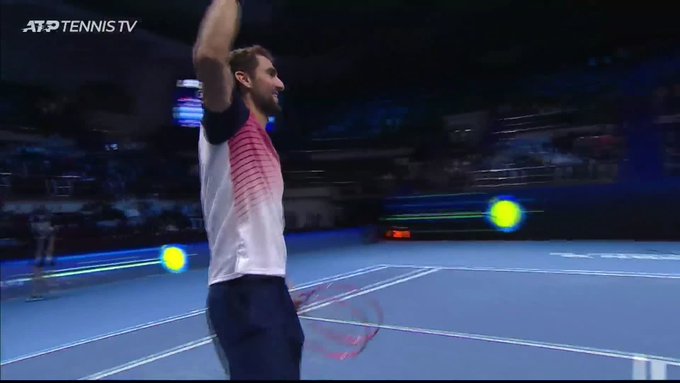 Čilić won the first set after a tie-break, although at 5:3 he had the serve and missed a set point. In the second set, Croatia’s best tennis player even had a break advantage twice, but Fritz came back both times and equalized at 1:1.

In the deciding set, Čilić lost the service first but then outpowered his opponent to win his second title this year after celebrating in Stuttgart in June. He played the final in Moscow last week but lost to Aslan Karatsev.

Čilić won the St. Petersburg Open for the second time in his career. He celebrated there for the first time in 2011.

Recall, Čilić advanced to the final after defeating Dutchman Botica van de Zandschulp in the semifinal (6:3, 6:3).

Donna Vekić is currently playing her ninth WTA Tour final of her career in Courmayeur and is facing 18-year-old Clare Tauson (WTA 49), who defeated Ludmila Samsonova 4:6, 7:6 (8), 6:4 in the other semifinal match. The Osijek native beat Italian tennis player Jasmine Paolini (WTA 56) 6:2, 6:0 in 64 minutes in the semifinal.

To learn more about sport in Croatia, CLICK HERE.

Justin Trudeau secures a third victory in an election ‘nobody wanted’

Russia’s Ambassador to Unesco Has Resigned, Clearing the Path for the World…

Kyrgyzstan: Expelled Journalist should be allowed to return from Russia

‘We Are One People’: Russia Bemoans Ukraine’s ‘separate Path’ – Todayuknews

inCruises International clarifies statement made by the Central Bank of Russia

Health & Nutrition 101: Why You Should Consider a Healthy Eating…