Oil and SUVs: Why Canada’s emissions have risen since Trudeau took office

Justin Trudeau’s climate compromise allowed the oil sector to grow, driving emissions up before his carbon price could bite

After a summer of unprecedented heatwaves and fires, climate change will be at the forefront of many Canadians’ minds when they vote in the federal election on Monday.

As well as looking at the parties’ manifestos, they will be judging the record of six years of government by Justin Trudeau’s Liberal Party.

In 2015, a month after taking over from Conservative climate sceptic Stephen Harper, Trudeau told the Paris climate conference: “Canada can and will do more to address the global challenge of climate change.”

But, over the next four years, Canada’s emissions increased to their highest level in decades. Canada is the only G7 country to have increased its emissions since the Paris Agreement.

When asked about this in election debates, Trudeau blamed his predecessor. “We inherited a government from Conservatives that did not believe in the fight against climate change and had a lot of catching up to do,” he said.

Isabelle Turcotte, the Ottawa-based director of federal policy at the Pembina Institute, agreed that Trudeau’s government was hamstrung by its predecessor’s legacy. “It takes time to turn a big boat around,” she said.

She added: “The Liberal party could have taken more ambitious climate action but there’s only so much inertia, so much pushback and political battles you can fight so some compromises were made in the name of national unity.”

Judging Trudeau’s record in full is difficult as emissions figures only go up to 2019. That’s the year that Trudeau’s government introduced, against fervent Conservative opposition, a C$20 ($16) per tonne price on carbon which will increase every year until it reaches C$170 ($134) in 2030.

Figures for 2020, 2021 and onwards are likely to show more of an effect from this carbon price – although the trend could be obscured by the impact of the coronavirus pandemic.

It’s fair to say that, in its first three years, Trudeau’s government did not reverse the upward trend in Canada’s emissions, which is driven by emissions from road vehicles and oil and gas production. Decreases in emissions from electricity generation and heavy industry have only partly cancelled these increases out.

Oil production has continued to rise and the processing of oil and gas, particularly from tar sands, uses a lot of energy and releases a lot of greenhouse gases. 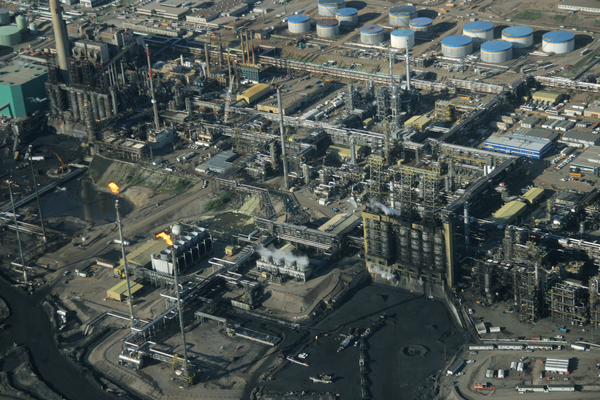 Waste gas is burned off a a Suncor production facility in Alberta. (Photo: E M/Greenpeace)

There has been a government drive to reduce “fugitive” emissions in oil and gas processing, which come from methane leakage or deliberate venting or flaring of gas as a waste product. This resulted in an 8% drop.

The Clean Air Task Force NGO’s Jonathan Banks worked with government on fugitive emission policies and said action in this area had been “fairly strong”.

But it was not enough to offset the emissions from increased production.

Emissions from processing oil and gas have risen 7% since 2015, from 97.5m tonnes of Co2 equivalent (tCo2e) to 105m, the total annual emissions of Belgium. This does not include emissions from burning the fuels, much of which takes place in other countries and shows up in their greenhouse gas inventories.

“Carbon intensity per barrel has been reducing but, in Canada, we are increasing production which means we are increasing overall emissions,” said Climate Action Network Canada’s domestic policy manager Caroline Brouillette.

While much of Canada’s oil and gas policy is in the hands of provincial governments, the federal government does have authority over pipelines – and it has backed them.

In 2018, it defied criticism from environmentalists to buy the Trans Mountain oil pipeline linking Alberta’s tar sands with coastal ports. When Joe Biden took office and cancelled permits for the Keystone XL pipeline through the US, Trudeau leapt to its defence.

Aside from oil and gas production, Canada’s other major and growing emitter is road transport. Its emissions have been rising for decades and Trudeau’s government has failed to reverse this trend, overseeing a 5% increase to 153 mt Co2e a year in 2019. 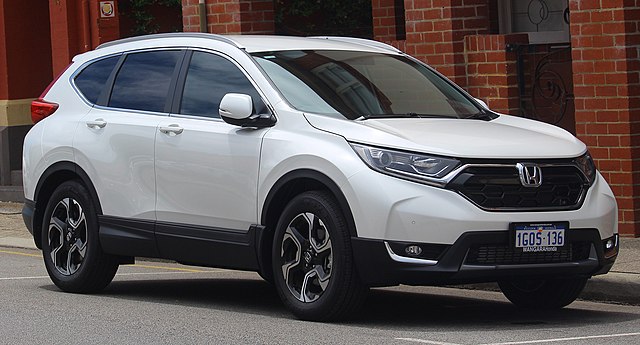 The Honda CRV is one of the top-selling SUVs in Canada. (Photo: Eurovision Nim/Flickr)

In a 2021 submission to the UN, the government said this is “largely due to more driving” as more people buy vehicles.

“Despite a reduction in kilometres driven per vehicle, the total vehicle fleet has increased by 42% since 2005, most notably for trucks (both light- and heavy-duty), leading to more kilometres driven overall,” the government wrote in 2021.

As in much of the rest of the world, vehicles used are also becoming more polluting. A report by Equiterre found that light-duty trucks like SUVs, pick-up trucks and vans accounted for 80% of new vehicle sales in Canada in 2020,

Turcotte added the development of public transport in cities is “not there yet” and there are particular challenges for rural communities in such a large country. The uptake of electric vehicles has been slow, she added.

As it ramps up, Canada’s carbon price will make buying fuel increasingly expensive. This is likely to make less polluting vehicles, including zero-emission ones, more appealing to Canadian drivers.

theBreaker.news Podcast: Less than 100 days to Xi Jinping’s Games of vice and woe –

Today’s coronavirus news: There are 340 new cases of COVID-19 in Ontario; one estimate

Trudeau: US Supreme Court’s ruling on abortion could mean loss of other rights

After Roe, Oregon advocates look to protect other privacy-based rights

Columbus doctor reacts to the overturning of Roe v. Wade

Trudeau: US abortion ruling could mean loss of other rights

A 79-year-old says Roe v. Wade saved her life after she was raped months post the…

Tim Allen reacts to ‘Lightyear’ starring Chris Evans: ‘Nothing to do…

The French Sneakers Kate Middleton and Jennifer Garner Both Wear Are…

Is the Marvel Cinematic Universe Trying Too Hard to Play Catch Up?

Cap Group, Franklin, Invesco and others to cover travel expenses for…