The booming used-car market has helped carmakers’ finance arms post record profits over the summer, easing the strain on the auto industry as production and sales are hampered by the global chip shortage.

Volkswagen’s financial services arm, which includes a bank and offers leasing, insurance and financing in more than 45 countries, almost trebled its pre-tax profit in the three months between July and September, to €1.5bn, the company said this week.

The German group’s car division, which delivered 2m vehicles worldwide during that period, made just €100m more, having been forced to shrink production by nearly a quarter due to supply chain bottlenecks.

Carmakers’ financial arms tend to underwrite the financing for their dealers, and benefit both from higher-value loans and from used cars having a higher than expected resale, or residual, value at the end of their lease.

Prices in the used-car market have rocketed during the past year because of the squeeze on new car sales caused by the global chip shortage. In many cases, second-hand vehicles are changing hands for higher value than their factory-fresh counterparts.

VW competitor General Motors’ finance division also more than doubled its profits in the nine months to the end of September, the US carmaker revealed, with pre-tax earnings rising to $3.9bn, compared with $1.7bn a year ago.

“The big drivers were obviously the strong used-vehicle values . . . and lower depreciation expense for the nine months, as well as lower provision for loan losses as a result of the reserve levels that were increased in the first half of 2020 at the onset of the pandemic,” said chief financial officer Susan Sheffield.

Ford Credit, which provides financing for the American company’s customers and dealers, posted $3.7bn in earnings before taxes in the same period, which included a record-breaking second quarter. The figure already exceeds 2020’s total by $1bn.

Daimler’s financial services arm, Daimler Mobility, was hit by supply bottlenecks in the last quarter, but the Stuttgart-based carmaker said it, too, was aiming to “utilise new market potential in the used-car market as well as through more flexible leasing and rental products, especially for electric vehicles”. 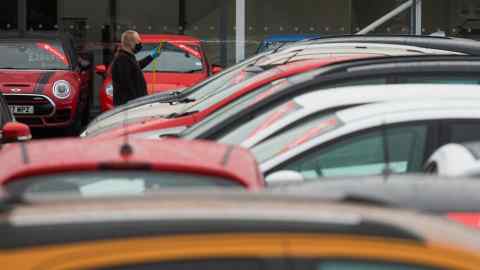 Not all carmakers have in-house finance arms, but some of them are moving into the area, conscious of the profits to be made.

Stellantis, the group formed by the merger of France’s PSA and Fiat Chrysler, is in the process of opening one in the US after buying financial services group First Investors in September.

“I think it’s really important for the business to have a finco,” Stellantis finance boss Richard Palmer said last week. “It’s clearly a big source of profitability in the medium term,” he said, citing rival GM’s decision to buy AmeriCredit as a foundation for its lending business, which now gives it a “very strong portfolio with a very profitable business”.

As their main businesses have been squeezed, some carmakers have even tapped their own finance arms to help fund their overall business. Renault received €1bn from RCI Banque, its in-house finance arm, after the European Central Bank changed rules this year about limits to dividend payments. The injection gives the French carmaker “sufficient margin to cover investment and restructuring” for the second half of the year, chief financial officer Clotilde Delbos said earlier this month.

Futures: Rally Strong; Why You Should Be Cautious

Lowes Stock Is On The Rise After Earnings, Despite Housing Market Dip

A tech rebound may be needed for a full market recovery. These are the stocks that…