DOGE/USD produced a sudden wicked rocket ride higher on the 28th of October while escaping its bearish price range, but then the cryptocurrency sold off again.

As the month of November gets ready to start, DOGE/USD has used the last few days of October to remind speculators that it remains a volatile cryptocurrency and should not be ignored. However, the move higher to nearly 34 cents on the 28th of October took place after DOGE/USD had essentially traversed within a bearish range the entire month. Yes, highs of 28 cents were seen on the 24th of October, but for the most part Dogecoin traded between 22 and 26 and half cents for a large portion of the month.

Not that it should have surprised anyone, but after the rocket move higher occurred on the 28th a sea of selling began to hit DOGE/USD and, as of this writing, the cryptocurrency is near 27-and-a-half cents. While many of its major counterparts have performed well the past month and some are traversing near all-time highs, Dogecoin has in many respects not been a bright star. In fact there is a growing crowd of analysts who are wondering aloud if the legions of Dogecoin backers which were loudly singing the praises of the cryptocurrency in the spring have vanished for good.

DOGE/USD remains in many respects in a price range it has traversed since the middle of June. The 35 cent height was tested in the middle of August and this week’s late attack on 34 cents certainly got the attention of the cryptocurrency market. However, DOGE/USD cannot escape the nagging feeling technically that it is trapped inside a rather tight consolidated range. True enough, value changes of 33 percent in nearly one day of trading is not a small move, but the point is that Dogecoin has come anywhere close to its record highs of nearly 74 cents seen in early May.

The question if DOGE/USD has been forgotten may be unfair, but it may have been forsaken, meaning attention has potentially shifted to other cryptocurrencies which are similarly speculative. If the power of influencers and proponents has actually lost some of their power to drive the price of DOGE/USD higher with mere whispers, this could explain the lack of ability for the cryptocurrency to mount a substantial move higher.

Speculative price range for DOGE/USD is between 15 and 40 cents.

The move to 34 cents a few days ago caught many speculators by surprise because of the swiftness of the buying. However, the inability of DOGE/USD to sustain its price above 30 cents is troubling from a speculative standpoint. Yes, its proponents may claim DOGE/USD remains a buying opportunity under 27 cents, but if support fails to be adequate around this price, sellers may target the 25 cents ratio with good reason. The 22 cents mark has proven strong the past few weeks, but a new challenge to lower levels, particularly if the broad cryptocurrency market remains optimistic would not be a good sign.

Optimistic traders of DOGE/USD who believe the current circumstances of the cryptocurrency will improve cannot be blamed, but they should have their stop losses working at all times.  Traders should not be overly ambitious if they are buyers, and until the 30 cents mark is penetrated and sustained it will be hard to say Dogecoin is enjoying a bullish trend.

The choppy conditions in DOGE/USD may make it useful as a quick hitting speculative trade by simply trying to take advantage of short term trends. However, the past few days of trading within Dogecoin are a reminder that entry price orders should be used to initiate trades. Sentiment in DOGE/USD does look rather troubling still and for a significant move upwards to develop, sustained buying above 30 cents needs to be demonstrated first. 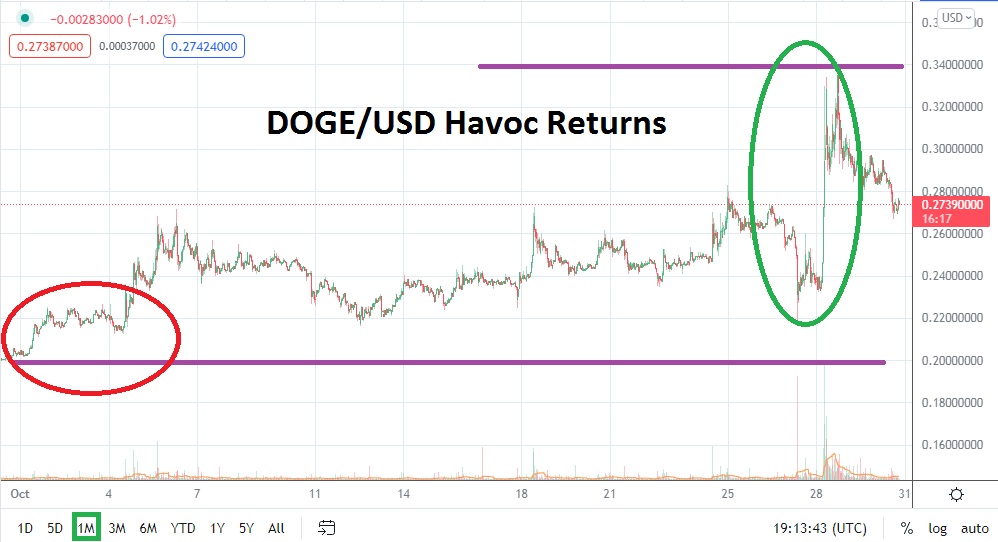 Mark Cuban and Voyager CEO Advise How to Get Into Crypto, Offer Tips for New Investors –