Why was the forecasted aurora a bust? :: WRAL.com

While observers in Iceland along with parts of Northern Europe and Russia enjoyed the northern lights, Thursday’s X-class solar flare and Coronal Mass Ejection (CME) of charged particles hurled into space, failed to put on the show further south.

Why was this forecasted G3 geomagnetic storm a bust?

Not unlike predicting how much snow a winter storm might bring, forecasters at NOAA’s Space Weather Prediction Center are working with many variables, and each has to line up just right to produce a significant event. This one had several variables: the magnetic strength and the polarity of the solar wind along with an slight increase in the solar wind indicating the Coronal Mass Ejections (CMEs) had reached Earth, None were significant enough to produce the aurora.

The effects of the CME — which are are large expulsions of plasma and magnetic field from the Sun’s corona — did reach Earth around 6 a.m. EDT Halloween morning.

The CME reached the level of a G1 geomagnetic storm, but too was close to sunrise to be visible across the United States. 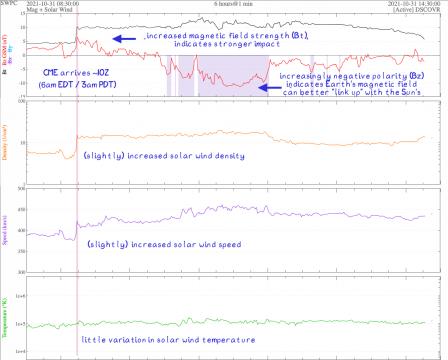 The effects were also too weak for those charged particles to reach deeper into Earth’s magnetic field and enable interactions with air molecules high in the upper atmosphere that create the light displays of greens, blues and reds.

There are a number of elements to a geomagnetic storm that have to line up to create the spectacular aurora you see in photos. Each of those measurements showed only small changes as particles from Thursday’s CME passed NOAA’s DISCOVR probe positioned 1.5 million km away between the Earth and the Sun.

Just like bar magnets or the magnets on your refrigerator, the Sun and Earth’s magnetic fields have an orientation. And just like those smaller magnets, these big magnets like to connect north to south, positive to negative.

This measurement was going in the right direction to encourage charged particles to flow along magnetic field lines, colliding with air molecules high in the upper atmosphere creating the light displays of greens, blues, and reds, it wasn’t strong enough to reach deep into Earth’s magnetic field to be further south into the lower 48 states. 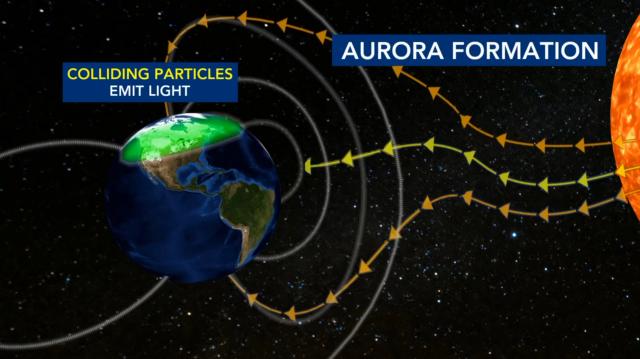 The Sun’s magnetic field is about as strong as the magnets on your refrigerator (~ 50 gauss), the Earth’s is about 100 times weaker. The higher the strength of the magnetic field in the solar wind as it reaches Earth, the more intense the auroral activity.

This weekend’s geomagnetic storm had only a small increase in this measurement.

There was a slight increase in the density of the solar wind, a good indicator that the CME had arrived. But this was also to small to have significant effect.

This is where you can see the CME in the data. Where the solar wind speed suddenly increases for a period of time and then drops back down. NOAA estimates the CME left the Sun at 973 km/sec. This morning’s increase of only about 20-30 km/sec indicates Earth received only a glancing blow and most of the CME missed us completely.

Considered together, these measurements suggest that this CME produced only a glancing blow to Earth, not the direct, stronger hit of previous geomagnetic storms like….

Compare DISCOVR measurements from Halloween 2021’s G1 geomagnetic storm to 2003’s G5 geomagnetic storm, which visible from California to Texas to Florida, you can see how different the two storms were. 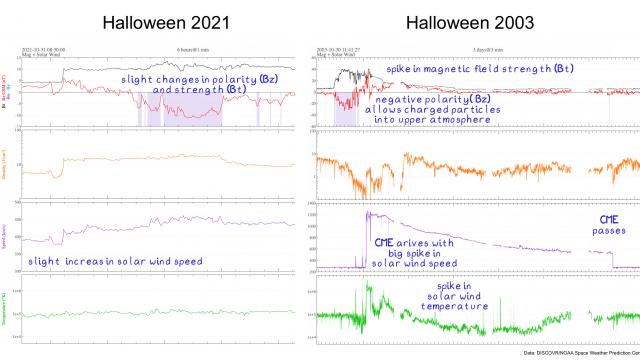 Read More: Why was the forecasted aurora a bust? :: WRAL.com

Netflix: 44 of the absolute best TV shows to watch

Road rage stunner: 2 in 3 drivers keep a weapon in their car

At least NIS 57.6 billion of Israelis’ pensions invested in fossil…

Abdi calls on international community to promote a political solution…

Fortnite Chapter 4 Season 1 Battle Pass: All Skins, Emotes, And Other…

Aaron Carter’s Family Wants His Money to Go to Son, No Fights…

17 Times Celebs Fully Geeked Out Over Other Celebs