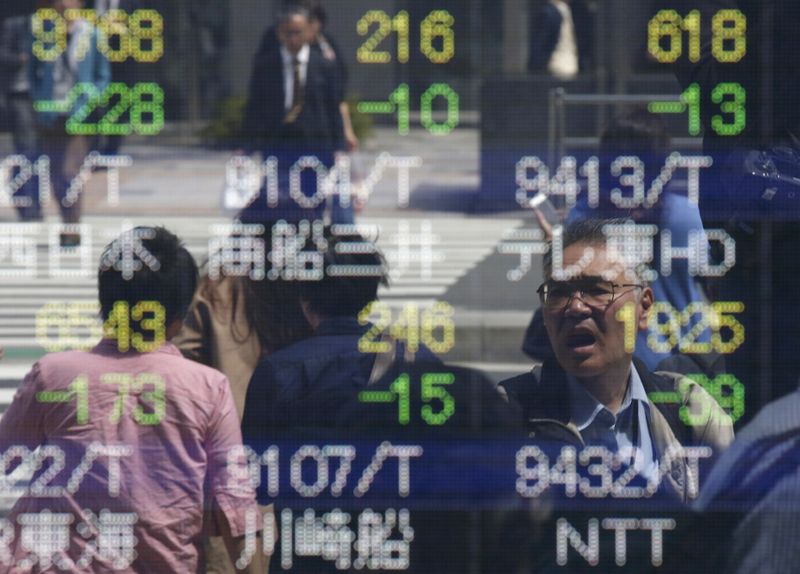 © Reuters. FILE PHOTO: People are reflected in a stock quotation board outside a brokerage in Tokyo, Japan, April 18, 2016. REUTERS/Toru Hanai

The Reserve Bank of Australia was the main focus on Tuesday, as it took a step toward unwinding extraordinary pandemic stimulus policies by abandoning an ultra-low target for bond yields. The spotlight now swings to the Fed and then the Bank of England, which also have meetings this week.

Asian shares were mixed with the MSCI’s gauge of Asia-Pacific stocks outside Japan holding steady at 0435 GMT, edging 0.4% lower and futures pointed to a weaker European and U.S. open.

In Asia, the RBA defied investor expectations for a more hawkish pivot, pushing the and dollars lower and drove short-term bonds higher.

“The market was pricing way more,” said GSFM investment strategist Stephen Miller. “They thought that the RBA would take bigger steps to remove monetary accommodation given the upside risks to inflation and I think the RBA have made the minimum adjustment possible.”

The Fed on Wednesday is expected to approve plans to scale back its $120 billion monthly bond-buying programme, while investors will also focus on commentary about interest rates and how sustained the recent surge in inflation is.

“The elephant in the room is headline and underlying inflation, which are higher than the (Fed) was anticipating,” said Standard Chartered (OTC:)’s head of G10 FX, Steve Englander.

“We expect the (Federal Open Market Committee) to state that the Fed is ready to act decisively if inflation is not moving towards target levels when tapering ends, but it still expects inflation to fall as supply constraints ease. We think investors will see this as advancing the likely timing of Fed rate hikes,” he said.

In commodities markets, a further 4% drop in Chinese coal prices on Tuesday pushed them 50% below last month’s record high.

Oil prices were little changed as expectations of strong demand and a belief that a key producer group will not turn on the spigots too fast helped reverse initial losses caused by the release of fuel reserves by No. 1 world energy consumer China.

200+ markdowns worth your money

Holiday shopping returned to a lower-key normal this Black Friday