Missing world number one Ashleigh Barty in Prague, Australia could rely on Gavrilova, the world number 412, as they beat Belgium 2-1 in Group B. 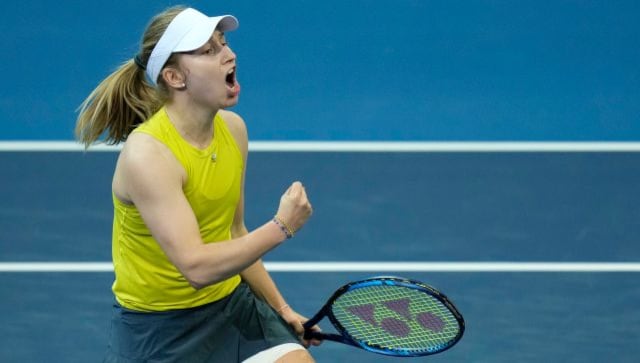 Prague: Daria Gavrilova and Storm Sanders led Australia to a surprising win over Belgium while Slovakia stunned the United States at the Billie Jean King Cup final tournament in Prague on Tuesday.

In the day’s other ties, Russia swept Canada 3-0 and Switzerland thrashed Germany 3-0.

Canada and Germany have already been eliminated from the tournament, a rebranded version of the Fed Cup dubbed the world cup of women’s tennis and staging four groups with three teams each.

The group winners will play Friday’s semi-finals. The final is scheduled for Saturday.

Missing world number one Ashleigh Barty in Prague, Australia could rely on Gavrilova, the world number 412, as they beat Belgium 2-1 in Group B.

The Russian-born player, who was once ranked 20th, had played her last competitive game at the Australian Open in February, before undergoing an Achilles tendon surgery.

But she returned in style, beating 70th-ranked Belgian Greet Minnen 6-4, 1-6, 6-4 despite struggling with the serve at times.

“I’m exhausted and really happy. I probably never had this much motivation in my life,” Gavrilova said.

“That was the most incredible feeling, I’m still shaking. But I played really, really well,” Sanders said.

Mertens and Minnen then rounded off the score by beating Ellen Perez and Sanders 6-2, 6-4 in the final doubles rubber.

Russia, who have brought five top-40 players to Prague, left little doubt they meant business as they eased past Canada in Group A.

“Very pleased of course, any win especially here in this competition is very important, and when you play in a team, the only goal for you is to win,” said Pavlyuchenkova.

Slovakia edged the United States in Group C after a thrilling doubles decider.

Kuzmova and Tereza Mihalikova led most of the doubles rubber against Caroline Dolehide and Coco Vandeweghe, but the American pair came back just in time to ensure a super tie-break.

Kuzmova and Mihalikova had narrowly lost a super tie-break against Spain on Monday.

“Yesterday it was very, very close so today we said it’s not going to happen again. We’re happy we got the win,” said Mihalikova.

“I’m happy I fought back after the first set, I think it was really close. I’m happy I pulled it through,” said Bencic, who ended the rubber with two aces against a resigned Kerber.

Golubic and Jil Teichmann then swept Anna-Lena Friedsam and Nastasja Mariana Schunk 6-1, 6-2 in the final doubles.

As all groups remain wide open, Russia are facing France and the United States will take on Spain on Wednesday.

On Thursday, Australia will play against Belarus and the Czech Republic will face Switzerland in the last group stage tie.

Celebrating the Art of German Lieder

Belarus moves migrants and refugees away from Polish border