My word, Jeff! It was as though the Prime Minister had turned into a potty-mouthed, gum-chewing football manager.

Boris Johnson was on stage at Cop26, suddenly spraying about more cliches than a fat-tongued Sky Sports presenter.

‘Well the boy done good and it’s a game of two ‘alves, so at the end of the day we’d just be ‘appy with the point, Gary’, etc.

Even his Bertie-ish manner seemed more geezerish than usual. Throw a sheepskin coat on him and a tweed flat cap, and he could have been Malcolm Allison being interviewed on an old Match of the Seventies rerun.

The PM was giving his farewell press conference and in true footy manager tradition, the gaffer was trying to put a fine gloss on his team’s performance over the past few days. 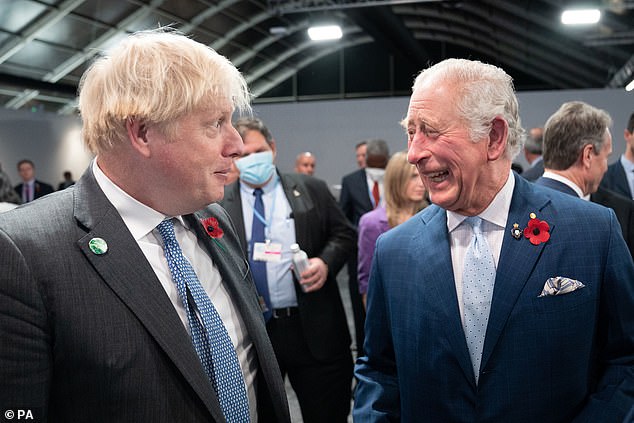 We heard how Boris had told journalists at the G20 in Rome last weekend that if climate change was a football match, the world was currently 5-1 down at half-time and struggling. Since then, he’d made a few changes.

He’d put some fresh legs on the pitch, twiddled his formation a bit. Given them the old Boris pep talk.

Thanks to that, they’d now pulled a goal back and were pushing for extra time. We’re still in this, lads! We were supposed to start at 5pm but kicked off late as usual.

The gaffer had got delayed. Handing out the half-time oranges perhaps. Twenty minutes later there he was, bungling on stage with that slightly hunched stoop.

Perhaps they’ll include it in their highlights reel when this is all over. As Boris speeches go, this was no Cape Canaveral – no explosions, no blasting booster rockets.

Instead, the PM attempted to strike a note of quiet optimism as world leaders dashed for the exit.

The vivid Borisisms were still there, though. He spoke of the Doomsday Clock still ticking. Except that the bomb disposal team was now on site and ‘snipping the right wires’. 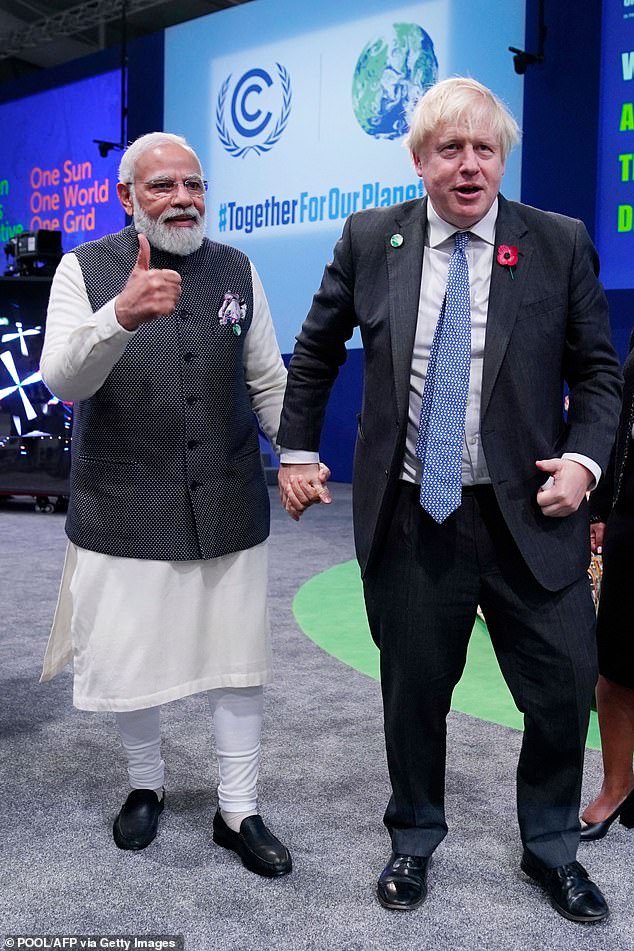 In a speech, Boris said ‘the UK is working hand in hand’ with in India ‘to transform the future of the power sector’, and he matched his words by taking prime minister Narendra Modi’s hand

Or at least he hoped they were the right ones anyway. I’m not sure cack-handed Boris is someone you would wish near a pair of nail scissors, let alone a set of wire cutters and a ticking bomb.

Did he appear a little pooped? Couldn’t blame him if he was. It had been a long and testing day of deal-making among the global gasbags and harbingers of horror. US President Biden was also accused of dozing off during a speech.

Speaking at various fringe events yesterday, old Sleepy Joe sounded in dire need of an early bed and a strong dose of Night Nurse. But there were at least two moments of light relief amid the growing gloom.

Boris and Prince Charles found something to smile about – with HRH looking as happy as he must have been when corpsing at The Goons as a youngster.

And following on from a speech in which Boris had said, ‘The UK is working hand in hand with our friends in India to transform the future of the power sector’, the old ham matched his words with action by taking prime minister Narendra Modi’s hand in his as they strolled through the conference centre.

But there was little respite from the media and in the exchanges that followed the football analogies continued thick and fast.

Sky News pointed out that without China’s wunderkinds on the pitch, ‘Team World’ didn’t stand a hope in hell. The Chinese, of course, hadn’t bothered to show.

The PM had spoken to Xi. He had a bit of a tight hamstring and the physios didn’t want to put him at risk, apparently. ‘Totally understandable,’ Boris insisted, defending his star man.

Sounded like a bit of the hairdryer treatment was in order. ‘Who scored the goal?’ the man from The Sun demanded to know. Was it the Queen? Was it Greta? Boris? The gaffer blanched.

‘Ah well, it’s a team game,’ he mumbled bashfully, reaching once again into that bag of footy banalities. Come off it, Boris!

It was Her Majesty wot won it, surely. Moments later, he was off. Darting to the airport to get that private jet back to London.

Macron extends deadline for U.K. to authorize more French boats in its waters

Even under the mask, Johnson looked like someone who knew the game was up

Opinion: An apology from the PM: ‘I really should have partied harder’

UK’s Boris Johnson in leadership crisis, accused of lying about…