Call it one tasty leap for mankind.

Astronauts figured out how to grow a chile pepper in space for the first time, NASA announced. The crew aboard the International Space Station celebrated successfully growing green Hatch chiles — a type of pepper found in New Mexico’s Hatch Valley — in microgravity by whipping up a batch of space tacos. 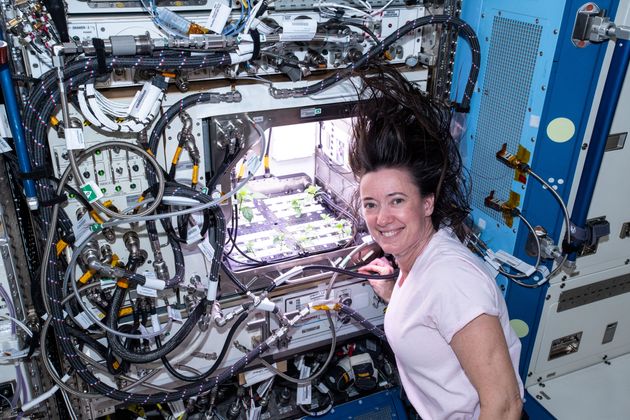 Astronaut Megan McArthur shared photos Friday of what she called her “best space tacos yet” on Twitter. The Mexican-inspired meal consisted of fajita beef, rehydrated tomatoes and artichokes, and a Hatch chile grown on the ISS. Sadly, no green cheese from the moon was available for grating atop the space tacos.

Friday Feasting! After the harvest, we got to taste red and green chile. Then we filled out surveys (got to have the data! 😁). Finally, I made my best space tacos yet: fajita beef, rehydrated tomatoes & artichokes, and HATCH CHILE! https://t.co/pzvS5A6z5upic.twitter.com/fJ8yLZuhZS

The crop of Hatch chiles was part of NASA’s Plant Habitat-04 investigation, according to NASA. The scientists began growing the spicy pods on the ISS in July in an effort to understand more about “plant-microbe interactions” in space.

Astronauts have been victorious in getting other veggies, such as radishes, Chinese cabbage, mizuna mustard, red Russian kale and three types of lettuce, to grow on the ISS. They’ve also grown zinnia flowers.

But what makes the Hatch chiles significant is that they are more difficult to grow in microgravity because they take a relatively long time to germinate and bear fruit, according to NASA.

And the point of the chile pepper experiment wasn’t just so astronauts could zhuzh up their presumably bland dehydrated food menu. Scientists want to expand the number of crops that astronauts can grow in space so their tummies can stay full during more ambitious missions in the future, NASA explained in a July news release.

“The challenge is the ability to feed crews in low-Earth orbit and then to sustain explorers during future missions beyond low-Earth orbit to destinations including the Moon as part of the Artemis program and eventually to Mars,” said Matt Romeyn, principal investigator for NASA’s Plant Habitat-04 experiment. “We are limited to crops that don’t need storage or extensive processing.”

So it looks like astronauts may get to munch on some Hatch chiles on future missions. Hopefully a crop of antacids is next.

Longest partial lunar eclipse in nearly 600 years: When to watch