GLASGOW, Scotland — Prime Minister Naftali Bennett spoke with French President Emmanuel Macron about the NSO spyware scandal during a private meeting on Monday afternoon on the sidelines of the COP26 climate summit in Glasgow.

They agreed to continue addressing the issue quietly and transparently, according to an Israeli official.

The media consortium behind the revelations, including The Washington Post, The Guardian and France’s Le Monde, reported at the time that one of Macron’s phone numbers and those of five French cabinet ministers were on the leaked list of potential targets.

The NSO Group has denied that Macron was among the targets of its clients.

Among other regional issues, Bennett and Macron also discussed Iran’s nuclear program, and its continued enrichment of uranium.

It was the first meeting between the leaders. 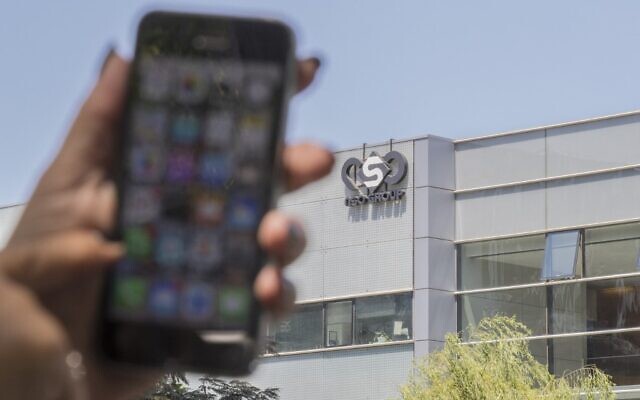 In this file photo taken on August 28, 2016, a woman uses her iPhone in front of the building housing the Israeli NSO group, in Herzliya, near Tel Aviv. (JACK GUEZ / AFP)

Earlier in the day, Bennett met with Australian premier Scott Morrison, speaking about the Iran threat in addition to climate issues.

Bennett urged Morrison to ensure that Australia pushes for a rebuke of Iran at the next IAEA Board of Governors meeting in November. Australia is one of the 35 board members of the UN atomic agency for 2021-2022.

Bennett also brought up the importance of recognizing Hezbollah as a terror organization. Australia currently recognizes only the Hezbollah External Security Organization as a terrorist group, and not the entire organization. In June, Australia’s Parliamentary Joint Committee on Intelligence and Security (PJCIS) recommended blacklisting all of Hezbollah.

Returning to a recent theme he has been expressing, Bennett said that climate change should not be a political issue, and that Israel’s contribution to the global effort is its talent for innovation. 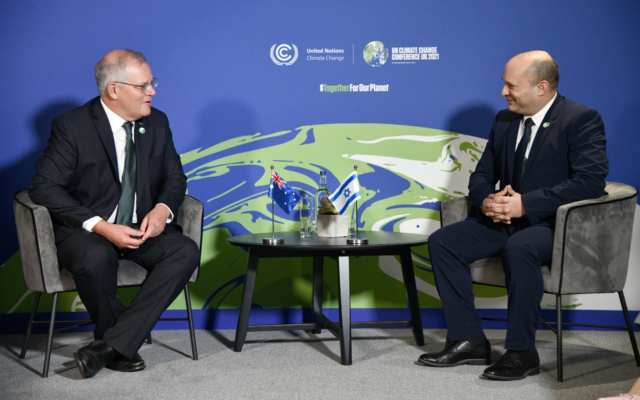 The prime minister also invited Morrison for a visit to Israel.

The last time the two leaders spoke was in June, when Morrison called to congratulate Bennett on cobbling together a government coalition.

The prime minister is leading a delegation to the Glasgow meeting of government officials, nonprofit leaders, academics and others.

Energy Minister Karine Elharrar and her new director-general, Lior Shillat, are part of the delegation, along with the director-general of Zandberg’s ministry, Galit Cohen.

You get Israel news… but do you GET it? Here’s your chance to understand not only the big picture that we cover on these pages, but also the critical, juicy details of life in Israel.

In Streetwise Hebrew for the Times of Israel Community, each month we’ll learn several colloquial Hebrew phrases around a common theme. These are bite-size audio Hebrew classes that we think you’ll really enjoy.

The Latest: Britain’s government: ‘end of coal is in sight’

Berlusconi: The musical is real but phone calls from Macron might not be

Macron hints at ‘political attacks’ amid probe into campaign funding

In Washington, Macron to seek relief for Europe Inc. amid China competition

Fact Check: Video of French President Macron Being Slapped in 2021 Viral as Recent |

In Washington, Macron to seek relief for Europe Inc amid China competition

Revenues at Smyths Toys in Ireland and UK pass €1bn

Who needs what to qualify for Qatar 2022’s knockout stages?