Europe must defend itself against Vladimir Putin’s energy weapon 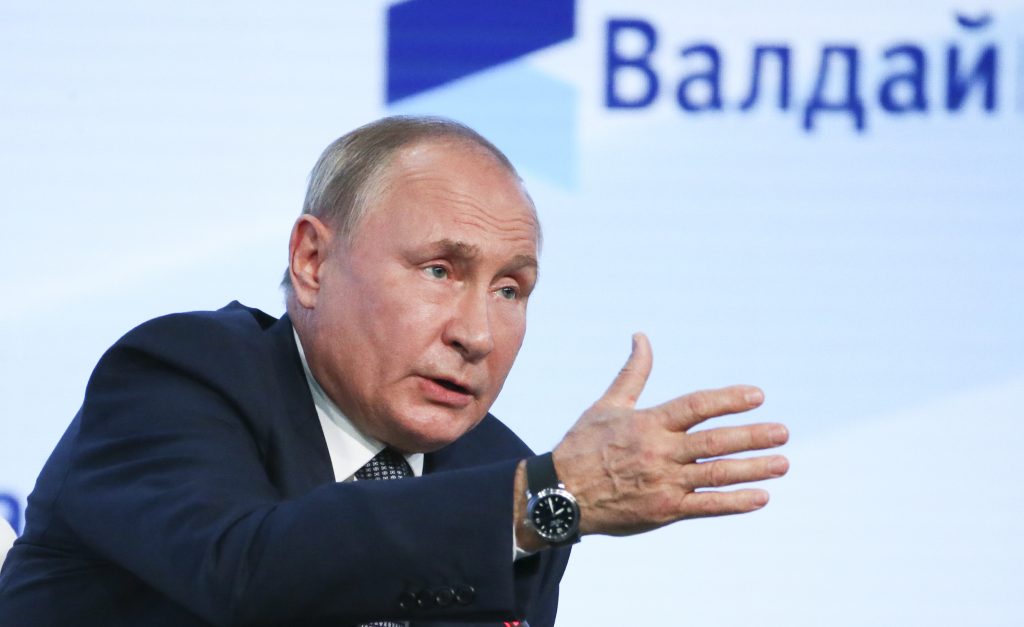 Russia’s role in Europe’s current gas crisis should be a wake-up call for Europeans who prefer to downplay the threat posed by Vladimir Putin’s revisionist regime. As the reality of Russian energy blackmail becomes more difficult to deny, calls are now mounting for the European Union to reduce its reliance on Russia and reassess its relationship with Moscow.

In an address to the European Parliament in Strasbourg on October 20, European Commission President Ursula von der Leyen warned that the European Union was “vulnerable” as it currently imports 90 percent of its gas, much of it from Russia. “Europe today is too reliant on gas and too dependent on gas imports,” the Commission President stated in a thinly veiled reference to Russia.

Meanwhile, in a widely quoted interview published on the same day, German Green Party co-chair Annalena Baerbock accused Moscow of playing a “poker game” with European gas supplies and called on Germany to resist Kremlin pressure to certify Russia’s controversial Nord Stream 2 pipeline. “We can’t allow ourselves to be blackmailed” by Russia, commented Baerbock, whose Green Party is currently engaged in three-way coalition talks to form the next German government.

Similar sentiments are also being voiced in Moldova, where a recently elected pro-EU government finds itself facing the prospect of a Russian gas cut-off amid pressure from Moscow to downscale ties with the European Union. Speaking to the BBC on October 26, former Moldovan presidential advisor Sergiu Tofilat claimed the Kremlin is “punishing” Moldovans for voting against the country’s pro-Russian party. “Vladimir Putin is trying to keep former Soviet countries within the area of influence of the Kremlin. We do not want to stay on our knees in front of Moscow. We must say no to Russian blackmail,” he stated.

These frank commentaries reflect mounting alarm over the Kremlin’s use of energy as a geopolitical weapon, something that critics of Nord Stream 2 have warned about for several years. These statements also indicate that European policymakers are belatedly coming to terms with the reality of a hostile Russia.

UkraineAlert is a comprehensive online publication that provides regular news and analysis on developments in Ukraine’s politics, economy, civil society, and culture.

During the first two decades following the end of the Cold War, interaction between Russia and the West was often tense. The relationship took a dramatic turn for the worse in 2014 when Putin seized Crimea and invaded eastern Ukraine, ushering in a new era of escalating Russian aggression towards the wider democratic world. Moscow’s tactics have included everything from political assassinations and weaponized corruption to coordinated disinformation campaigns and cyberattacks on key institutions and infrastructure.

Putin is now on the cusp of a major strategic coup as he seeks to gain regulatory approval and begin shipping natural gas directly to Germany via his new gas pipeline, Nord Stream 2. This will give Moscow unprecedented leverage over the continent’s energy markets. And the Russian leader is already demonstrating what that will mean.

Construction of Nord Stream 2 is complete but the pipeline has not yet received official approval to start operating due to court challenges in Germany on anti-trust, national security, and environmental grounds. The US Congress and most EU leaders believe Nord Stream 2 is a geopolitical weapon disguised as an economic project, but a combination of powerful German business interests and Russian influence has so far enabled the pipeline to overcome opposition.

Russia’s ownership of the Nord Stream 2 project through a Gazprom subsidiary contravenes EU regulations and may impede certification. Rather than wait for the approval process to deliver its verdict, Putin has taken matters into his own hands. Since summer 2021, Russia has refused to meet rising demand for gas across Europe. This has created a severe supply shortage that has driven prices up to record highs and produced an unprecedented shortfall in storage volumes ahead of the winter heating season.

Despite calls for Russia to step in and ease Europe’s gas crisis, Putin and other senior Kremlin officials have refused offers to increase gas deliveries via the Ukrainian transit network. Instead, they have openly stated that the crisis can only be eased by the rapid certification of Nord Stream 2. Critics fear that if such strong-arm tactics work and the pipeline is swiftly approved while bypassing German and EU regulations, Putin will succeed in tightening his control over Europe’s gas supplies and undermining the rules-based principles of the continent’s energy markets.

Crucially, certification of Nord Stream 2 will also allow Russia to bypass Ukraine’s gas transit system altogether. Opponents of Nord Stream 2 have long argued that the principle objective of the economically unjustified pipeline is to remove Russia’s dependence on Ukraine’s gas transit network in order to give the Kremlin a freer hand in its hybrid war against Ukraine. While Putin’s latest gas games should alert all EU leaders to the dangers posed by Russia, they also should remind them that Ukraine remains in grave danger.

The conflict between Russia and Ukraine first erupted in 2014 following the overthrow of pro-Kremlin Ukrainian President Viktor Yanukovych. For the past seven years, Russia has occupied Crimea and much of eastern Ukraine’s Donbas region, where Ukrainian and Kremlin forces continue to face off in a bloody stalemate along a 400km front line.

Russia remains far from reconciled to the loss of Ukraine, as demonstrated by highly belligerent recent articles authored by Putin himself and former Russian president Dmitry Medvedev. There is little question that Moscow intends to force Ukraine back into the Kremlin orbit.

The looming threat posed by Russia should provide new impetus to Ukraine’s faltering domestic reform agenda. Since 2014, the Ukrainian authorities have been preoccupied with rebuilding the country’s threadbare armed forces and have struggled to uproot corruption in the judiciary, media sector, political class, and state institutions.

Efforts to achieve reform breakthroughs have been consistently blocked by a powerful alliance of oligarchic and Russian influences. Both have a vested interest in keeping Ukraine as corrupt and dysfunctional as possible. However, with Russia now poised to isolate Ukraine from Europe in the energy sector, anti-corruption efforts have become a national security priority. Without reforms, Ukraine will be unable to join the EU or NATO.

Thanks to Putin’s increasingly undisguised attempts at energy blackmail, more and more Europeans are now coming to regard Russia is a hostile neighbor. They must now act decisively to defend their countries and their values.

In the short term, this means strictly enforcing the EU’s own energy regulations with regard to Putin’s pipeline, while imposing sanctions together with the US in response to the weaponization of gas supplies. Looking ahead, Europe must consider rethinking its entire relationship with Moscow in order to limit its exposure to unfriendly Russian actions.

The future of Europe is at stake. Russia intends to create a continent where might is right and the rules no longer apply to the powerful. This is simply unacceptable and poses a direct challenge to the core principles of the European Union.

Diane Francis is a Nonresident Senior Fellow at the Atlantic Council’s Eurasia Center, editor-at-large with the National Post in Canada, author of ten books, and author of a newsletter on America.

The views expressed in UkraineAlert are solely those of the authors and do not necessarily reflect the views of the Atlantic Council, its staff, or its supporters.

The Eurasia Center’s mission is to enhance transatlantic cooperation in promoting stability, democratic values and prosperity in Eurasia, from Eastern Europe and Turkey in the West to the Caucasus, Russia and Central Asia in the East.

Follow us on social media
and support our work

Ariana Grande and Cynthia Erivo to star in ‘Wicked’ movie

The CIA chief says Putin is ‘entirely too healthy.’ What do we really…

Kremlin slams reports that Putin is unwell as ‘fakes’; Ukraine could…

Russia’s war aims in Ukraine widen, U.S. says any annexations will be…

Trump getting reelected in 2024 would solve ‘all of Russia’s…

Meet the Putin Lovers Who Want Him to Invade Their Country