BEREA, Ohio — It was Week 9 of the 2019 season, and Cleveland Browns quarterback Baker Mayfield dropped back to pass. It was late fourth quarter against the Denver Broncos with 3:23 on the clock. The Browns’ season — one that carried so much hype and hope after the blockbuster trade for Odell Beckham Jr. in the offseason — was on the line. It was fourth-and-4, and down the sideline, Beckham sprinted past Denver cornerback Chris Harris. OBJ was open.

Mayfield briefly looked his way. But instead of throwing, Mayfield double-clutched. Then, he turned back toward the middle and forced a pass to Jarvis Landry that fell incomplete. The Browns dropped to 2-6, their season effectively over.

Beckham was visibly incensed not to get the ball at such a critical moment. And in the hours and days that followed, Mayfield was relentlessly panned. Why didn’t he throw it to Beckham? Especially when OBJ was wide open? 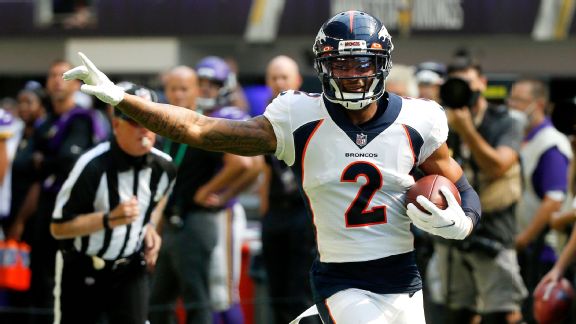 Except, Beckham had run the wrong route. Or, to put it another way, his own route.

“That’s why Baker looked confused,” as one team source put it. “That’s how it was all year, which was frustrating.”

Over the following two seasons, Mayfield and Beckham both tried to make their connection work on the field. They spent hours throwing passes together. They took trips together. They even played video games together.

But ultimately, not much changed.

Finally, their fraught connection on the field fractured their relationship off it.

Friday, the Browns announced they would release Beckham.

“After careful consideration, internal discussions and conversations with Odell and his representation, we’ve determined that it is in the best interest of all parties involved that Odell no longer play for the Cleveland Browns,” Browns general manager Andrew Berry said in a statement. “We appreciate all his efforts and contributions while in Cleveland, but we’ve just reached a point where it is best that we move forward as a team without Odell. We are finalizing the process of granting Odell his release and we wish him well as he continues his career.”

ESPN’s Adam Schefter reported the Browns are converting Beckham’s base salary into a signing bonus to lower his cap number in an attempt to save money. Once the contract is finalized, Beckham will be released. He can’t be claimed on waivers until next week.

Beckham’s eminent release caps a whirlwind week in Cleveland, which pitted him against the team’s quarterback.

Tuesday, hours before the NFL’s trade deadline, Beckham’s father posted a video on social media highlighting all the times this season Mayfield didn’t throw Beckham’s way or missed him when he was open. Odell Beckham Sr. went on to trash Mayfield in the comments, as well.

How did a partnership that began with so much promise go so wrong — and end so badly?

‘This has zero to do with anything off the field’

When Beckham arrived at his first Browns training camp, he carried over a tradition from his days with the New York Giants, sitting with different groups of players at each meal in the cafeteria.

“I talk to everybody who’s in this locker room, in the weight room, meetings. I talk to everybody,” Beckham said then. “You’ve got to get to know who you are battling with. When the whistle blows, it’s just us out there. These are guys. … you’ll forever remember and cherish.”

That routine didn’t go unnoticed. Nor did other gestures.

Before his first Browns game, Beckham provided every player with a new pair of Nike Air Max 720 sneakers. He did the same for Cleveland’s equipment and training staff.

Beckham even invited teammates to his house, a town over from the Browns training facility, to take whatever clothes or shoes they wanted from his closet.

“Odell is cool in that whole room,” one NFL source said, referring to the locker room.

The good will Beckham had cultivated over the past two-plus seasons was evident this week, even after his father ripped the team’s quarterback.

“I feel like the majority of this locker room would love to have him in this building — flat-out,” safety John Johnson III said Thursday.

“The craziest part of this whole situation is that they’re friends,” said one source close to Mayfield. “Maybe it wasn’t perfect. But it was never strained.”

Only a couple of weeks ago, the two were together playing video games. On Labor Day weekend before the start of the season, Mayfield and Beckham Jr., along with Landry and tight end Austin Hooper, flew to Big Sky, Montana.

Beckham flew to California for Mayfield’s wedding in the summer of 2019. And during their first training camp, Mayfield repeatedly sought out Beckham’s mother to give her a hug.

“This has zero to do with anything off the field, which is why it’s all so perplexing,” said another source. “I don’t know of one [incident] that’s ever [come between] them off the field. … this is all about the field.”

This week, it was no longer just about the field. Beckham’s silence said enough.

“I was pretty surprised by the video and the intentions and the feelings behind it. I’d be lying if I said otherwise,” Mayfield said Wednesday. “I thought we had a very open line of communication.”

‘About a quarter of a second off’

Rob Ninkovich shares his thoughts on potential landing spots for Odell Beckham Jr. if the Browns release the star WR.

The first Saturday of Mayfield and Beckham’s first training camp together produced enormous anticipation in Cleveland in 2019. Thousands of Browns fans packed the bleachers encircling the practice fields to watch.

The season before in 2018, Mayfield had broken the NFL rookie record with 27 touchdown passes. Cleveland finally had genuine hope in the flag-planting, trash-talking former Heisman Trophy winner and No. 1 overall pick.

Then on March 12, then-general manager John Dorsey traded for Beckham in a blockbuster deal with the Giants. The trade for a star player of Beckham’s caliber transformed Cleveland’s expectations, from playoff maybe to AFC North favorite.

But that first training camp foreshadowed problems ahead.

That first Saturday, Mayfield scrambled out of the pocket off a busted play with his eyes fixed downfield. But none of his receivers, notably Beckham, turned back to make a move toward him.

The crowd, which had come to see Mayfield throw Beckham touchdowns, reacted in collective stunned silence. After a few seconds, then-Browns linebacker Christian Kirksey finally broke the tension, hollering to the fans, “that’s what happens when the defense is winning.”

Afterward, both Mayfield and Beckham downplayed the uncomfortable sequence.

“Once we get on the same page,” Beckham boasted later that day, “it’s gonna be scary.”

Browns backup quarterback Case Keenum has marveled at the chemistry that Mayfield and Landry have consistently enjoyed, at times connecting on routes not even in the playbook. Keenum said in Minnesota he also had an immediate rapport with Vikings receiver Adam Thielen, but with All-Pro Stefon Diggs, the chemistry didn’t come so easily.

“Some [duos] take a lot more work and communication, and some it’s just a little nod and you know what they’re going to do and they know what you’re going to do,” Keenum said this year. “But I really do feel like some of those ones that did take the most time, man, when it did hit, the floodgates just poured and it was like, this was worth the wait.

“With Baker and Odell, I see it coming.”

That was on full display on the opening highlight of the video that Beckham Sr. posted.

Late in the fourth quarter in Week 4 in Minnesota, the Browns were on the verge of putting away the Vikings. Mayfield thought Beckham would break off his route. Beckham saw the coverage differently. And with nothing but green turf in front of him, he kept running. By then, it was too late. Mayfield had already fired the ball. And the result was an embarrassing underthrow.

Jeremy Fowler polled a panel of more than 50 coaches, execs, scouts and players to come up with top-10 rankings for 2021:

“About a quarter of a second off,” Mayfield said then, “from me being able to see [what Beckham saw] to give it some air.”

Crypto Is Cool. Now Get on the Yacht.

Czech PM to step down and signal end to political uncertainty

Riots in Belgium, Netherlands after Morocco win at World Cup

Sources: 1B Santana to Pirates on 1-year deal