Several types of Chinese navy warships are powered by engines that were either developed or built by German manufacturers, an investigation by public broadcaster ARD and the Welt am Sonntag newspaper revealed Saturday.

The two companies involved are MTU in Friedrichshafen and the French branch of the Volkswagen subsidiary MAN, according to the report.

Both companies told the media they have always complied with export control regulations and have put into the public record that they have been involved with China’s military.

The details on MTU’s engine deliveries in China were found on the publicly available website of the Stockholm International Peace Research Institute (SIPRI).

According to SIPRI, MTU was a regular supplier of engines for Luyang III class missile destroyers through a licensed production plant in China until at least 2020. 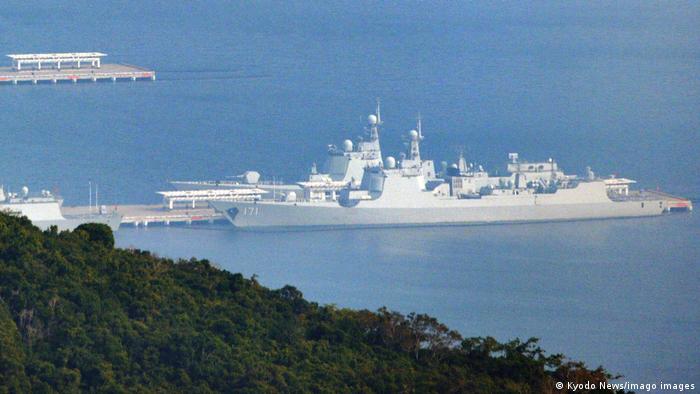 However, the company’s headquarters told ARD and Welt am Sonntag that they had “definitively stopped” supplying engines for the submarines.

The company claims it had not “entered into any contracts with the Chinese Defense Ministry or armed forces.”

Yet, with the establishment of a joint venture in China in 2010, the head of the company known as Tognum at the time had noted deliveries of “marine engines for the Chinese navy and coast guard.”

Likewise, in 2002 SEMT Pielstick, the French subsidiary of MAN, published news of its delivery of PA6 engines manufactured for a new frigate generation under license in China on the company website. That item can still be located on the site’s archive pages.

SIPRI noted that the MTU engine installed on China’s warships is a so-called dual-use technology not requiring an export license.

“There’s a gray area there,” said Siemon Wezeman of SIPRI.

The Chinese navy is commissioning more Luyang III destroyers this year. Ships in this class come equipped with surface-to-air missiles and cruise missiles.

China commissioned the Kaifeng in July to commemorate 100 years since the founding of the ruling Chinese Communist Party.

Following the massacre of students and others protesting for democracy in Tiananmen Square in 1989, the EU imposed an arms embargo but with limited binding effect.

Sebastian Rossner, a Cologne-based lawyer and export expert, told Germany’s ARD public broadcaster: “Because the EU arms embargo on China was not formally decided in accordance with the European treaties, certain exports of ship engines may also be permissible for the Chinese navy.”

“If you want to change this, the EU must either amend the Dual-Use Regulation or formally impose an arms embargo,” he added.

China has aggressively asserted territorial claims to disputed islands in the South China Sea in recent years, raising tensions with the United States and its European allies.

In August, the German frigate Bayern set off from Wilhelmshaven for a six-month journey to the Indo-Pacific.

Germany has sought to strengthen its presence in the region, and a Chinese stop was meant to help defuse tensions over the naval mission. But in September, China denied Germany’s request to allow the Bayern to make a port call in Shanghai.

A Turtle, a Pool and the Fight to Save Puerto Rico’s Beaches

Prague Zoo gets Taiwanese pangolins after fallout with China