Russia on Saturday edged Switzerland to win the maiden Billie Jean King Cup in Prague, but the win turned sour as the Swiss suggested the new champions had replaced players against the rules.

“I have too many emotions now, I’m feeling like I’m freezing and it’s unbelievable really. Unbelievably happy,” Samsonova said after celebrating with her team. 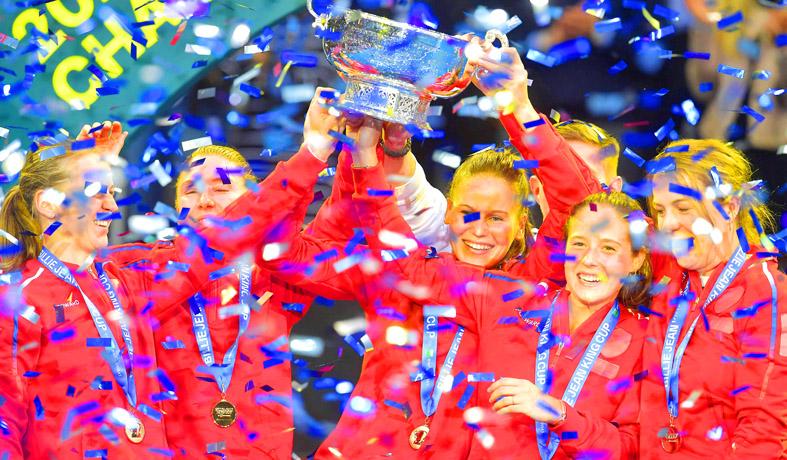 “Today was an incredible fight, it was more than tennis,” she added.

World No. 39 Teichmann, demolished Storm Sanders on Friday, as Switzerland beat Australia in the semi-final, but the 28th-ranked Kasatkina, who had sat out Russia’s previous two ties, proved a different level.

The Russian went 5-0 up on her precise hitting and three breaks, as Teichmann struggled with her serve, and she took the set easily despite a late break by the Swiss player.

Both held on to their serves in the second set until game seven when they traded a break apiece, but Kasatkina earned one more and then held on to her serve, taking the set as Teichmann blasted her forehand out of the court.

“Amazing feeling. I’m happy that I bring this very important point to my team,” Kasatkina said.

World No. 40 Samsonova had a lion’s share in Russia’s semi-final win over the US, as she won her singles game and then helped Russia take the doubles.

Bencic, ranked 17th, had only lost a set in her three singles at the tournament before the final.

Samsonova, a last-moment replacement for an injured Anastasia Pavlyuchenkova for the final, was the first to break, but Bencic, cheered by the arena, immediately came back and then broke again in game eight to take the first set.

The fast-serving, big-hitting Russian weathered four break points in the 10-minute first game of the second set and struck five games later before adding another break to level.

On a roll, she did the same early in the third set and despite being impatient on the finish at times, she held on to her serve to take the match in 2 hours and 22 minutes.

The joy was overshadowed by claims that Russia had broken the rules when they replaced Pavlyuchenkova with the in-form Samsonova moments before the match.

“We were told 15 minutes before the tie started that they switched the No. 1 player for the No. 4 player,” Switzerland captain Heinz Guenthardt said.

“Either she actually injured herself, that would be unfortunate, or they did it on purpose, which would be cheating,” he added. “Did that throw us off? Yes it did.”

“I think it was ugly to be honest,” Bencic said. “I’m just very disappointed right now.”

“But on the warm-up she felt like she’s not able to give 100 percent. [Because of] that we changed the nomination, that’s it,” he said.

Pavlyuchenkova said she had had “a knee issue” for a long time, calling the Swiss accusations “disrespectful.”

“I think in sport you have to learn and accept to lose,” she added.