Asia-Pacific markets are set to open on a bright note to kick off the trading week after positive Chinese trade data crossed the wires. China’s October trade surplus rose to $84.54 billion USD. That was more than $20 billion over what analysts expected, according to a Bloomberg survey. A big surge in exports alongside weaker-than-expected imports was responsible for the upside surprise in cross-border transactions.

The record figure suggests the appetite of global consumers is growing as Covid restrictions continue to roll back across key economies. However, weaker-than-expected imports highlighted China’s domestic woes during a month when an energy crunch and a housing market slowdown weighed on sentiment. That caused Chinese policymakers to take several steps that impacted economic activity. Iron ore imports slowed in October, while coal inflows increased.

Today’s economic docket is rather light, which will leave traders to digest the Chinese trade data from over the weekend. Investors may also be encouraged by the passage of a major infrastructure package in the United States. On Friday night, the House of Representatives passed a $1 trillion USD economic package that contains billions in new spending for roads, bridges, ports, electric vehicle stations and other construction projects.

Later this week, Chinese inflation and Australian employment data will cross the wires. The two events are potential high-impact risk drivers. Analysts expect China’s October CPI to drop at 1.4% y/y, while Australia’s employment change is forecasted for a +50k print, according to data from Bloomberg. China will also release new Yuan loans (Oct) later in the week.

AUD/USD is trading just under the 38.2% Fibonacci retracement from the September/October move as the APAC session kicks off. The 50-day Simple Moving Average (SMA) provided support on last week’s drop. If bull’s can’t clear above the Fib level, a move back to the 50-day SMA may be on the cards. Prices would eye the 61.8% Fib (0.7315) below that. 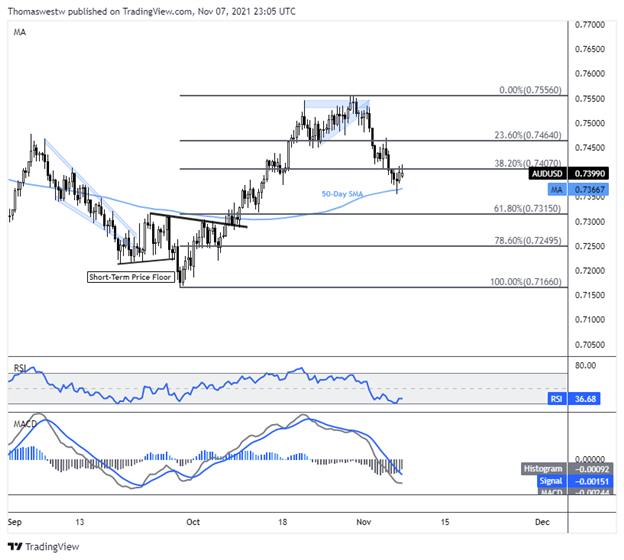 Bitcoin Adoption Is The Start Of A Digital Revolution

4 people have been charged in the Texas semitruck smuggling operation…

Hydrogen-powered lorry to be mass produced by Essex fleet operator