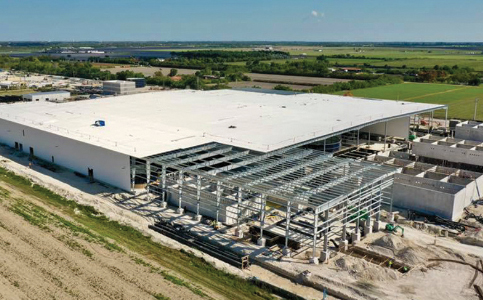 Atlantic Sapphire, which grows sustainable, pollution-free salmon from eggs to maturity in its land-based facility in Homestead, announced an agreement that will bring Skretting, the company’s supplier of fish feed, to South Miami-Dade.

In exchange, Atlantic Sapphire committed to continuing to source the majority of its salmon feed from Skretting over the next 10 years.
Feed is Atlantic Sapphire’s largest cost component. Skretting currently supplies the company’s feed from its Canadian operations, and executives say having a local source of feed will represent huge savings, especially in view of current hikes in logistics and transport.

“Having our most important production input locally fits perfectly with our strategy,” said Johan E. Andreassen, CEO of Atlantic Sapphire USA, in a prepared statement. “It reduces production cost and greenhouse gas emissions significantly, while at the same time accelerating the technological development of a customized feed for our Bluehouses that we expect will lead to higher productivity and output. Further, we see this agreement with the world’s leading salmon feed producer as a strong sign of confidence in our business case and future growth.”

A timeline for the new Skretting facility will have to wait until permitting and other documentation is secured, but once underway, construction is estimated to take about two years.

By that time, the second phase of Atlantic Sapphire’s build-out should be completed.

“We have started building the second phase right next to the first,” CFO and Managing Director Karl Øystein Øyehaug said. “That will bring production from 10,000 metric tons to 25,000 by completion in mid-2022. We are still ramping up, but we expect to start showing a profit in about half a year.”

The company’s long-term goal is to produce 220,000 tons of salmon annually.

Bluehouse fish farming differs from traditional land-based methods in that the fish are raised in one location, swimming through a series of tanks known as bluehouses that simulate the salmon’s growth cycle in nature.

Atlantic Sapphire’s first bluehouses were built and refined in a small village in Denmark, and European investors constitute a majority of its shareholders. Now that the company’s operations have moved to the US, however, more Americans are investing in it “and we expect that trend to go forward,” Mr. Øyehaug said.

“South Florida has a geological advantage in the Florida Aquifer. Its attributes fit us very well – much better than coastal Denmark – which is why we moved all of our operations to South Florida.”

Earlier this year Atlantic Sapphire signed a deal with Publix Super Markets that put its trademark Bluehouse Salmon in the chain’s 818 Florida stores.
“We are very excited about our deal with Publix, which is our largest customer,” Mr. Øyehaug said. “They are very strong on local products, and we fit into that very well. The sales numbers are up with every week that goes by.”

He said Atlantic Sapphire would welcome similar arrangements with other food outlets in South Florida.

Quebec: In Canada, a new way to prosecute domestic and sexual assault

China’s life expectancy goes up to 77.93 yrs amid falling birth…

‘Doctor Strange in the Multiverse of Madness’: The Cost of…