Foreign Minister Yair Lapid will fly to Europe next week for discussions with the leaders of the United Kingdom and France centered on looming negotiations aimed at reviving the 2015 Iran nuclear pact, his office said Wednesday.

Lapid will meet with UK Prime Minister Boris Johnson and French President Emmanuel Macron during his three-day trip, which comes as talks between Iran and world powers are set to kick off Monday in Vienna.

“The minister’s visit will focus on the resumption of nuclear talks in Vienna as well as the deepening of bilateral relations between Israel and Britain and France,” the Foreign Ministry said in a statement.

The world powers — known as the P5+1, which include the UK and France — are set to resume talks with Iran on Monday over a return by Iran and the US to the terms of the 2015 JCPOA nuclear deal.

Talks have been frozen since the summer when Iran elected a new hard-line president.

Israel has staunchly advocated against an American return to the accord, which Jerusalem believes is far too weak and ultimately paves the way to an Iranian nuclear weapon. Israeli officials have instead called for a different, harsher diplomatic approach, backed up by the credible threat of a military strike on Iran’s nuclear program.

Lapid will take off from Ben Gurion Airport on Sunday morning for London, and will hold his first meeting on Monday with his British counterpart Liz Truss.

Lapid will meet with Boris Johnson and the Conservative Friends of Israel later in the day.

On Tuesday, Lapid will meet with French Foreign Minister Jean-Yves Le Drian, followed by his sit-down with Macron. He is expected to return to Israel early Wednesday morning.

Lapid’s trip is the latest sign of increasingly close ties between the UK and Israel. 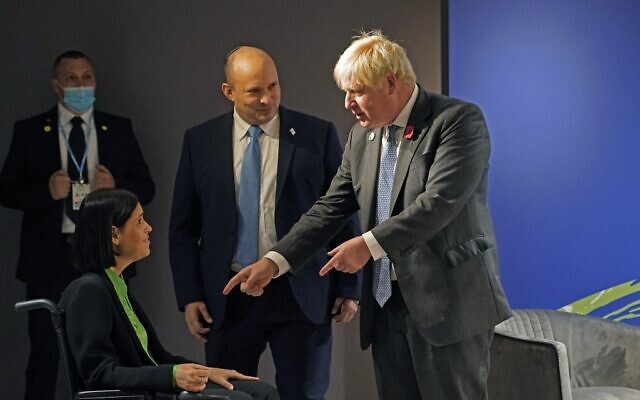 On Tuesday, Johnson warned that “the world doesn’t have much time” on Iran, during comments with Israeli President Isaac Herzog, echoing concerns by leaders in Israel and the West over Tehran’s uranium stockpile, which has grown while talks were frozen.

Herzog urged both Johnson and a group of 100 British lawmakers he met with separately to make sure their government remains tough on Iran as world powers prepare to restart the negotiations.

“Our understanding is that the Iranians are not coming [to Vienna] to do business, rather to rush toward a bomb,” Herzog told the MPs at the Palace of Westminster.

“It is the duty of the superpowers to be strong and make it clear that all options are on the table,” he added, in an apparent reference to Israel’s consistent demand that countries present a credible military threat against Iran.

Herzog also met with Truss and Johnson on his trip.

Also last week, London announced that it was designating the entirety of Hamas as a terror organization and outlawed support for the group.

Truss came into office in September, and held what Lapid called “a warm and friendly conversation” with Israel’s top diplomat in October.

She has been vocal about her support for the UK-Israel relationship. In a speech at the Conservative Friends of Israel reception earlier that month, Truss spoke of her desire to build “deeper relations” with the Jewish state, particularly around technology, security and trade.

???????????????? The UK and Israel are close friends and allies who believe in democracy and enterprise. Great discussion with FM @Yairlapid on ways to deepen our cooperation across:

She also named Israel as being among the UK’s most trusted allies as she spoke of a new “network of liberty” to counter authoritarian states and “malign actors.”

“The foreign secretary and Lapid will be hosting a strategic dialogue, in which they’ll be talking about the normal range of issues,” said a source at the British Embassy in Tel Aviv. “This is also an opportunity for the foreign secretary to set out the importance of the bilateral relationship to the UK and to her personally.

There have also been indications that France is warming up to Israel. 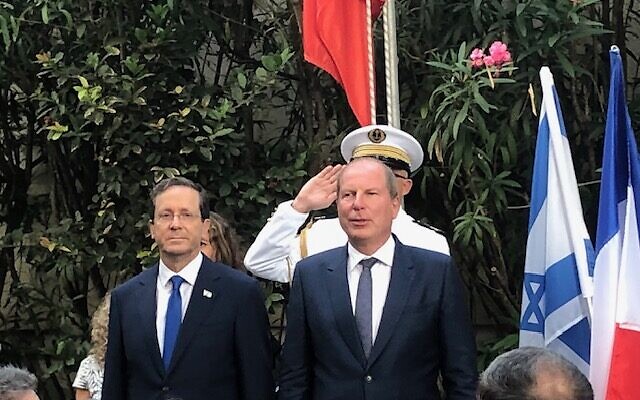 However, France does maintain open diplomatic channels with Iran. Macron was the first Western leader Iran’s new president Ebrahim Raisi spoke to after he took office in August.

Macron called on Iran to “quickly resume negotiations in Vienna in order to get to a conclusion and put an end without delay to all the nuclear activities it is carrying out in breach of the agreement,” the French government statement said.

Boris Johnson risks losing control of his angry MPs after weeks of sleaze and rebellions,

Macron warns against humiliating Russia and ‘isolated’ Putin to keep…

It’s not just the far right that should worry us. It’s their ideas seeping into the

France’s Emmanuel Macron: Russia cannot, should not win in Ukraine after strike on…

After submarine row, Macron tells Australian PM he wants to focus on future

France’s Macron says deep-sea mining must not go ahead