Firefighters rushed to rescue residents in France today as homes were drenched in three weeks of rain in just 12 hours, causing landslides and swollen rivers.

Heavy rains lashed a large swath of southwest France and northern Spain overnight, leading to evacuations of dozens of residents and rivers overflowing their banks. One person was reported dead in Spain.

Warm southern winds that have melted snowbanks in the Pyrenees mountains in recent days also contributed to the flooding, which could persist for several days.

Scroll down for video 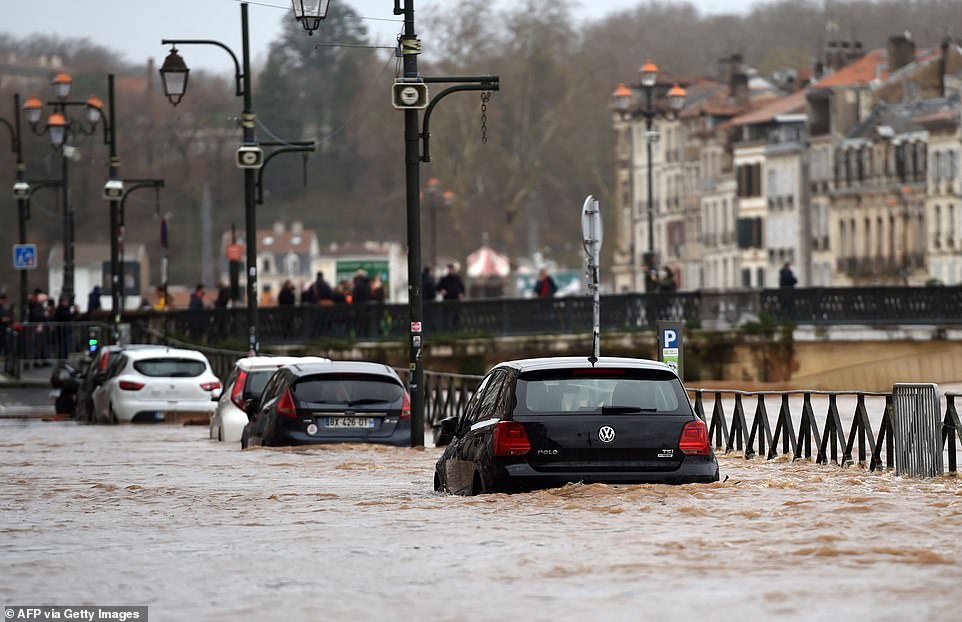 Pictured: Bayonne, southwestern France, where cars were submerged by water in flooded streets on December 10, 2021. The flooding comes after heavy rains lashed a large swath of southwest France overnight, leading to evacuations of dozens of residents and rivers overflowing their banks 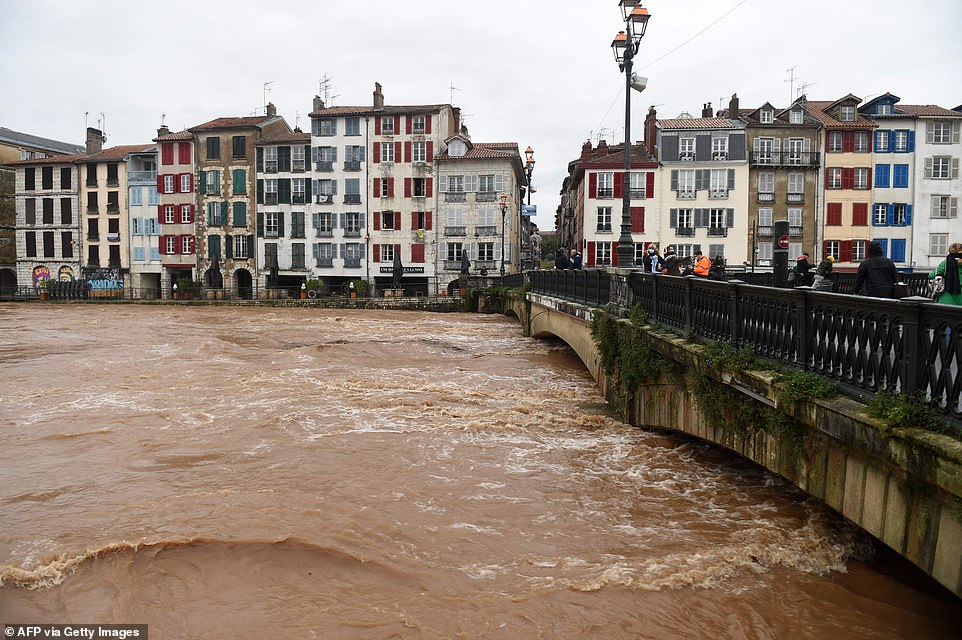 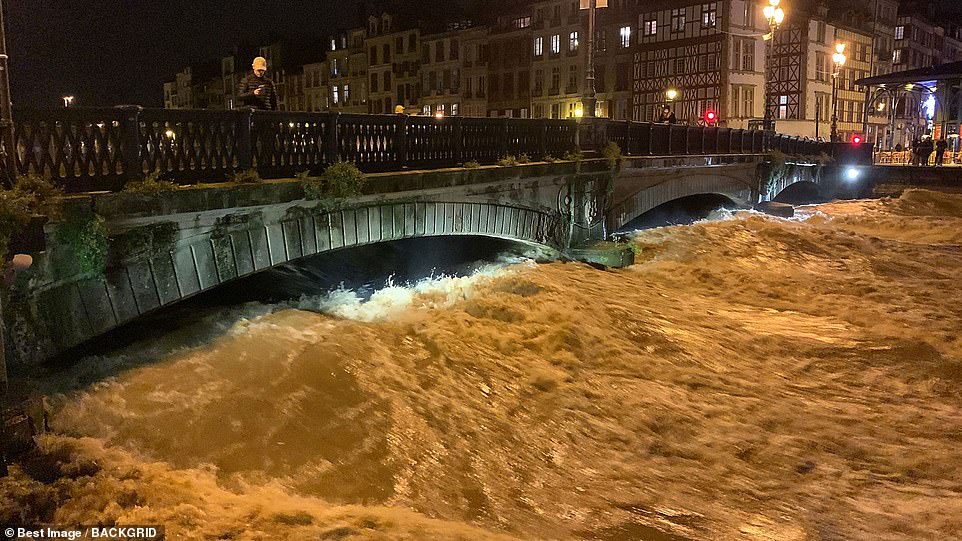 Floods in Bayonne, France. The Nive river reached 6.15m, a record according to local reports 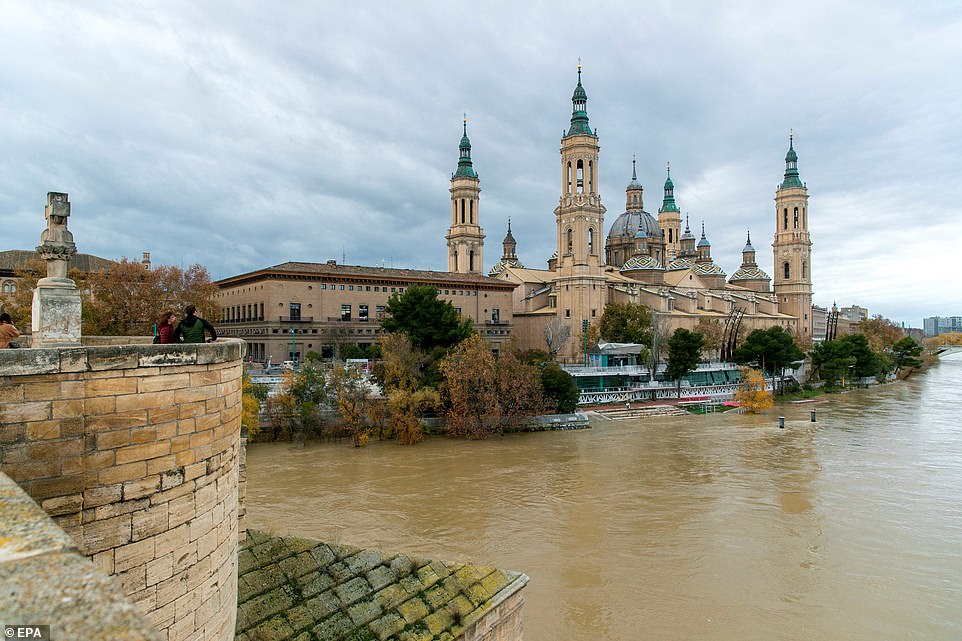 The Ebro River surrounds the Cathedral-Basilica of Our Lady of the Pillar in Zaragoza, Spain, December 10, 2021. Warnings have been issued due to the possibility of an overflow of the river following heavy rains registered in the region

Several regions have an ‘orange’ warning in place until at least Sunday, with local media reporting that one region – Pyrénées-Atlantiques – saw almost five inches of rain at 4am in Friday.

‘Despite one person injured, we have no serious accidents or deaths, with firefighters responding to more than 250 calls in the past few hours,’ Interior Minister Gerald Darmanin told journalists after discussions with local officials.

The Meteo France weather agency also warned of high avalanche risks in the Pyrenees, which separate France from Spain, where local flooding was also reported. 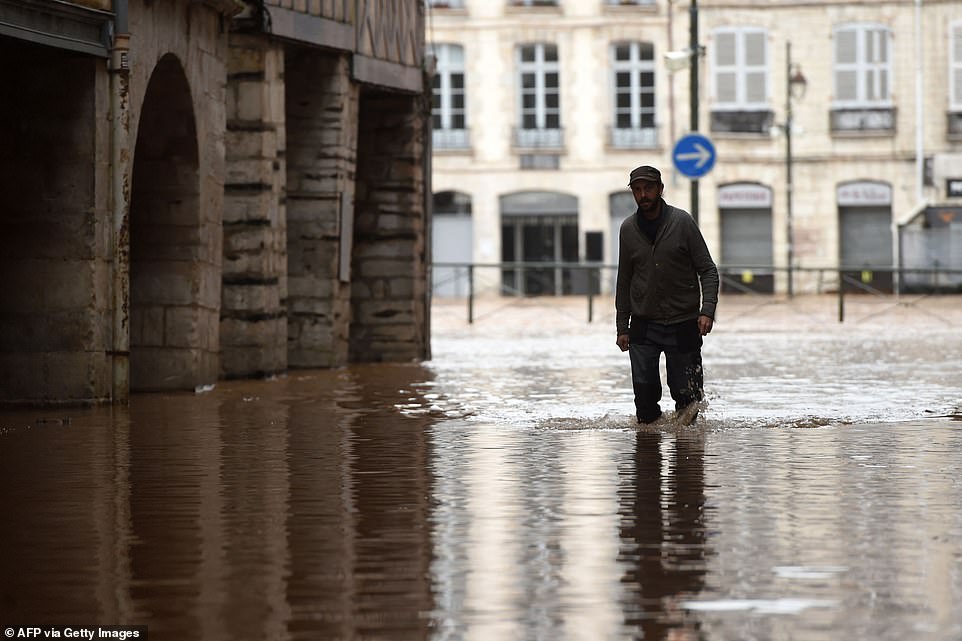 Warm southern winds that have melted snowbanks in the Pyrenees mountains in recent days also contributed to the flooding, which could persist for several days. Pictured: A man walks in flooded streets of Bayonne, southwestern France on Friday 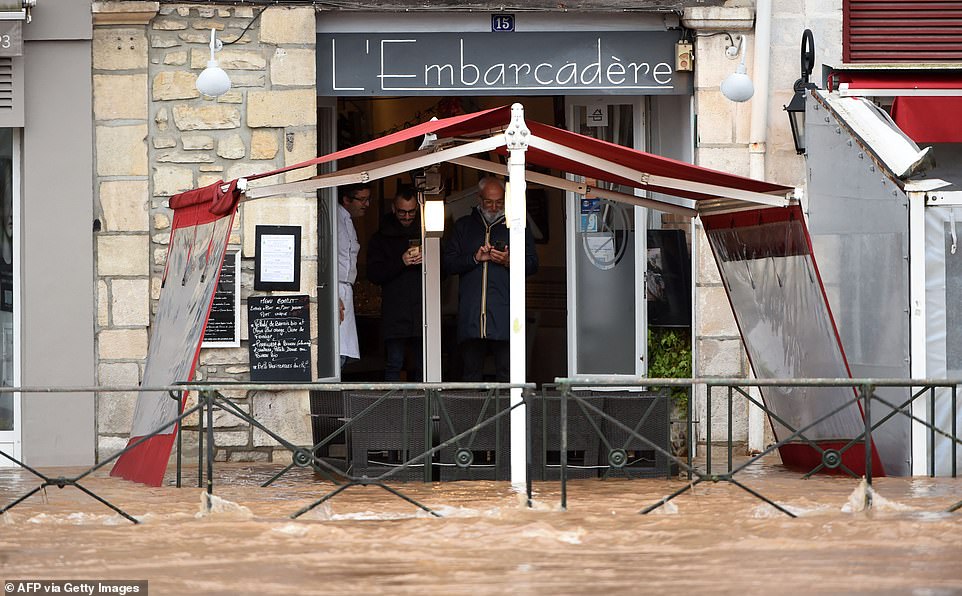 Workers of restaurant look on flooded streets of Bayonne, southwestern France, on December 10, 2021 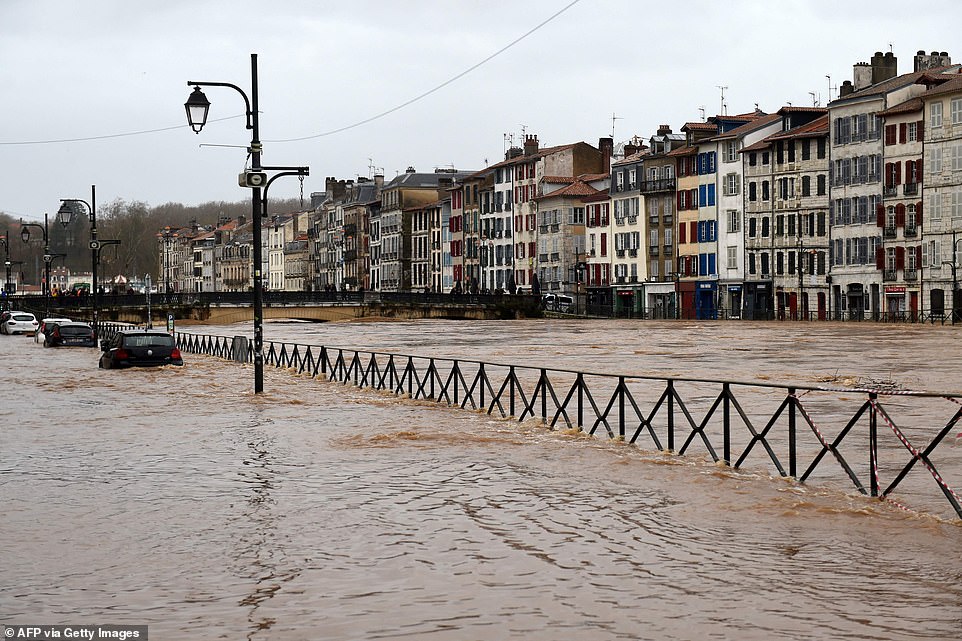 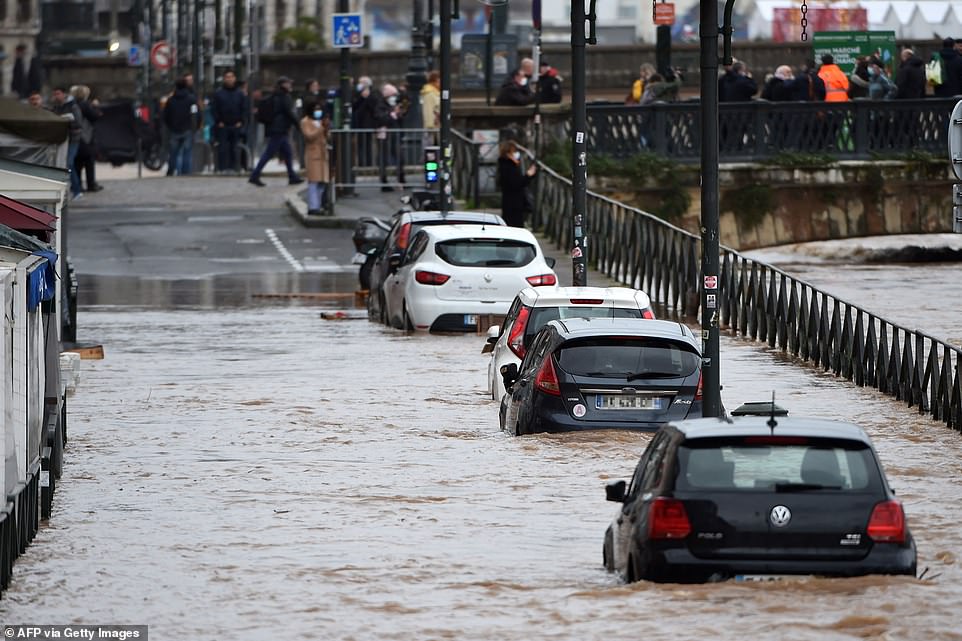 The regional government in Spain’s Navarre region said a woman died Friday in her car after a landslide that followed two weeks of heavy rains.

Pictures from the Spanish city of Zaragoza showed the banks of the river Ebro, that runs through the centre and past a cathedral, bclose to bursting.

According to Euro Weekly News, a man in Spain was killed in the town of Sunbilla when the roof of a shed collapsed on to the top of his vehicle.

Eric Spitze, the French government’s top official for the Aquitaine region that includes Bordeaux, said that while the situation was ‘under control,’ forecasts of more rain to come could see floodwaters rise further in several towns and cities.

In the coastal city of Bayonne, loudspeakers carried warnings for crowds of people who gathered along the banks of the Nive river to take pictures of the torrents. 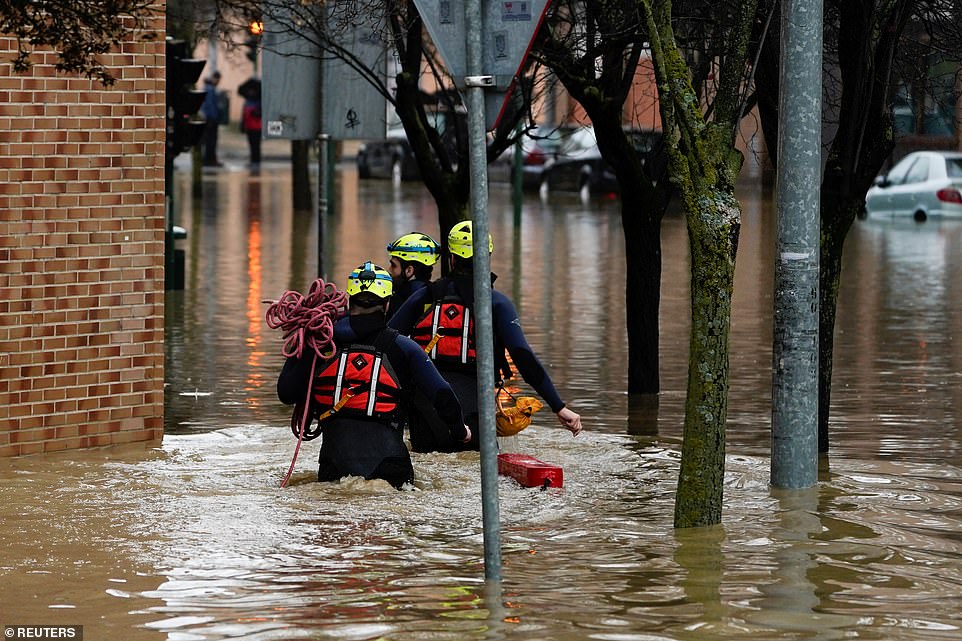 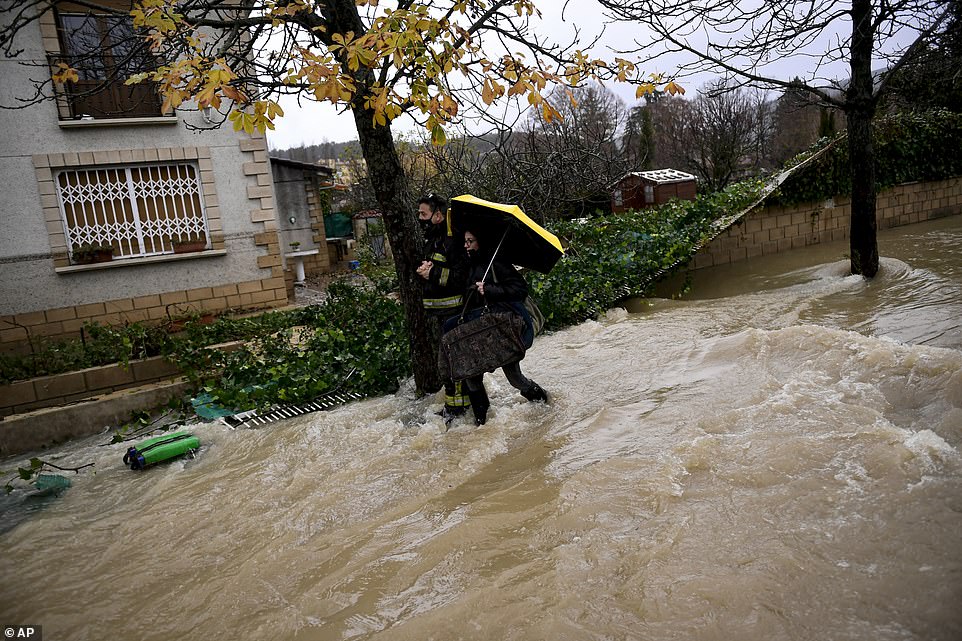 A woman is helped by fireman while walking in a flooded area near the Arga River in the neighborhood of Huarte-Pamplona, near to Pamplona, northern Spain, Friday, December 10, 2021 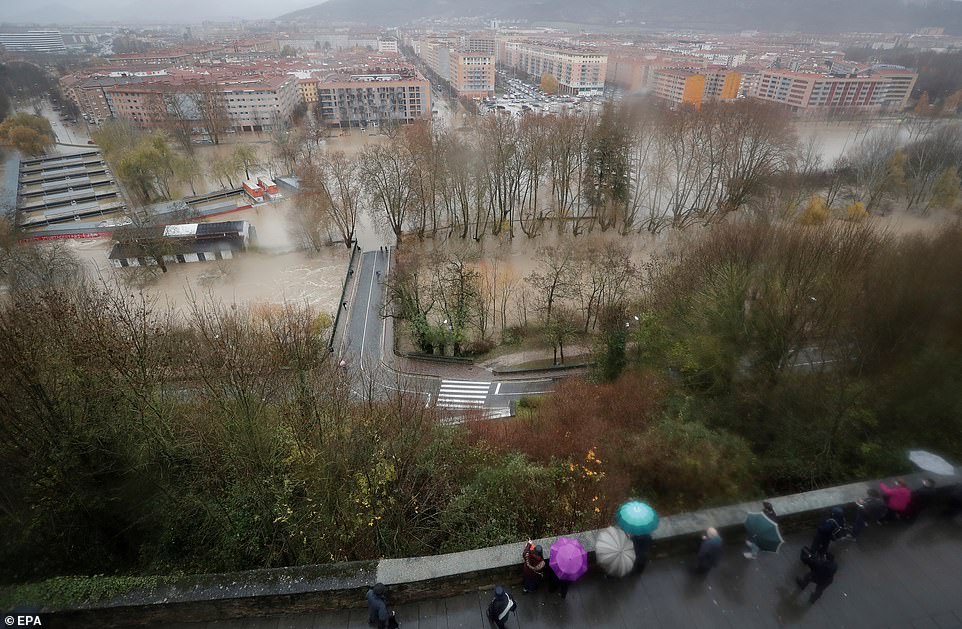 A flooded area in the aftermath of heavy rains in Pamplona, Spain, December 10, 2021. The Arga River has overflown following heavy rains in the early of Friday 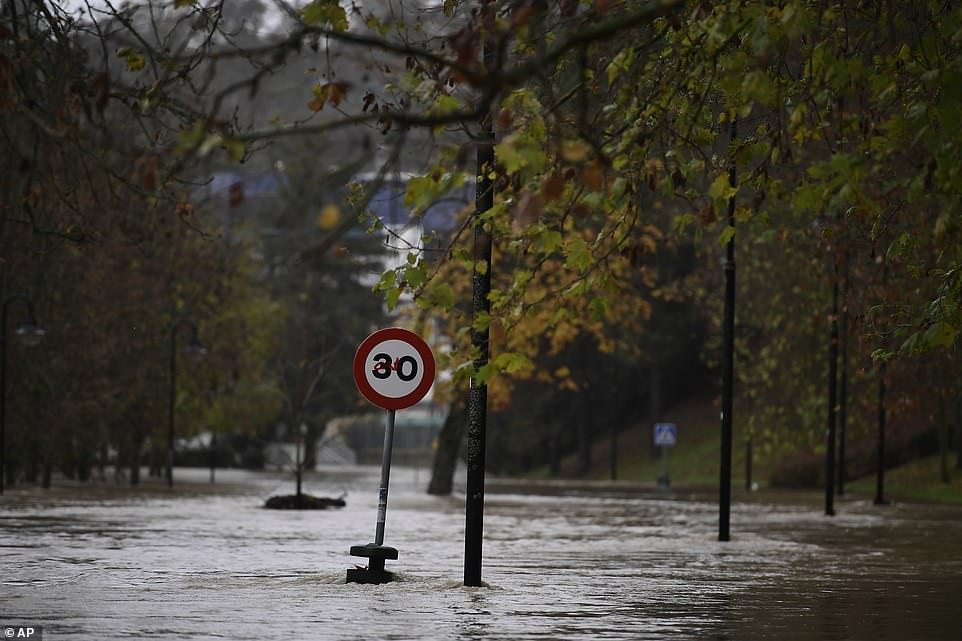 A road with a traffic signal covered with flood water, near the Arga river, in Pamplona, northern Spain, Friday, December 10 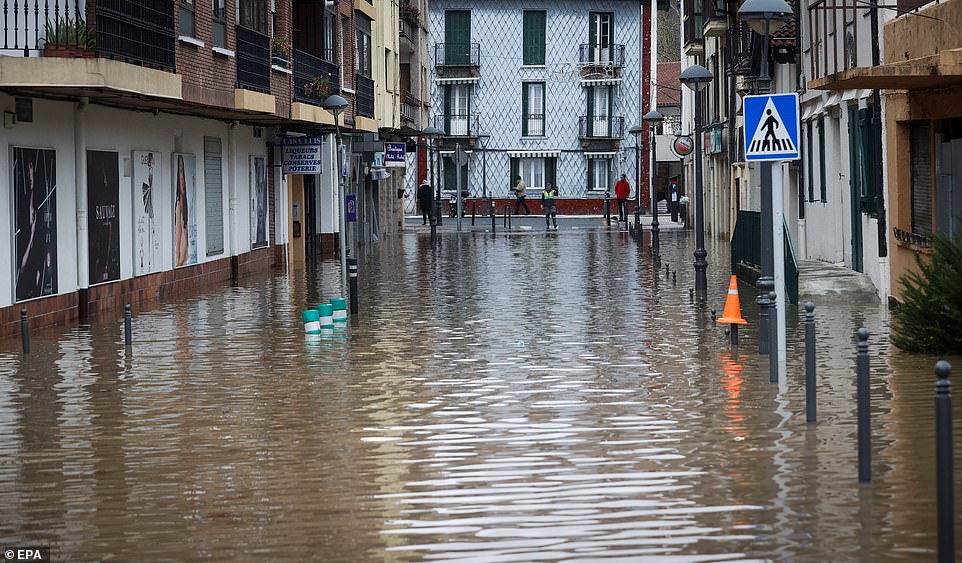 A flooded area in the Behobia neighborhood after the Bidasoa river overflowed due to heavy rains, in Irun, Spain, December 10, 2021 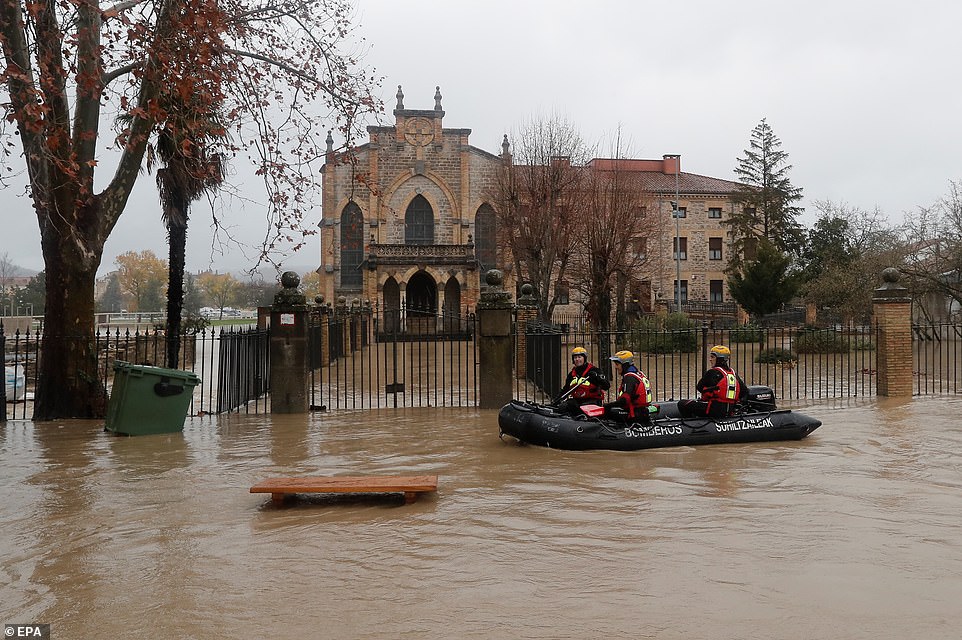 Firefighters use a dinghy to inspect the flooded streets in Pamplona, where River Arga has overflown due to the heavy rains registered during the early hours, in Pamplona, Spain, December 10, 2021

Authorities cancelled a Friday night rugby match in Bayonne between Aviron Bayonnais and US Montauban, and Mayor Jean-Rene Etchegaray also urged businesses along the Nive river to close.

Classes were called off at several schools and some roads were closed, while train services were disrupted and electricity cuts were reported at hundreds of homes across the region.

Further inland, the flooding caused a landslide in the Pyrenees village of Itxassou, with one resident, a 37-year-old who gave his name as Jean-Claude, said his home was swamped in 16 inches of water – for the second time in seven years.

‘In 2014, they said it was once-in-a-century flooding, and now it’s already happening again,’ he told AFP.

Read More: Firefighters rush to rescue residents in France as homes are drenched in 3 weeks of rain

How women have managed periods throughout history

How many UEFA Champions League finals have been played in Paris? European Cup history…

Aussie Lee off to quick start in LPGA Match-Play