London [UK], December 11 (ANI): A large number of human rights activists including Tibetans, Uyghurs, Hongkongers, Mongolians held protests outside the Chinese Embassy in London over human rights abuses in China and sought action against the Chinese Community Party (CCP) regime as well as urged to boycott 2022 Beijing Olympics.
Hundreds of people were joined by the members of persecuted minority communities from mainland China to express “anguish” against the Chinese Community Party (CCP) regime and invited global attention towards human rights violations being perpetrated against minorities in mainland China and its forcibly occupied territories.
A large number of people comprising of young students, activists and veterans gathered outside the Chinese Embassy in London and protested against the mass human rights abuse. They highlighted the injustices taking place across China and its occupied territories.
“We are outside the Chinese Embassy today to remind China we will never give up our rights and freedom,” said one of the activists. 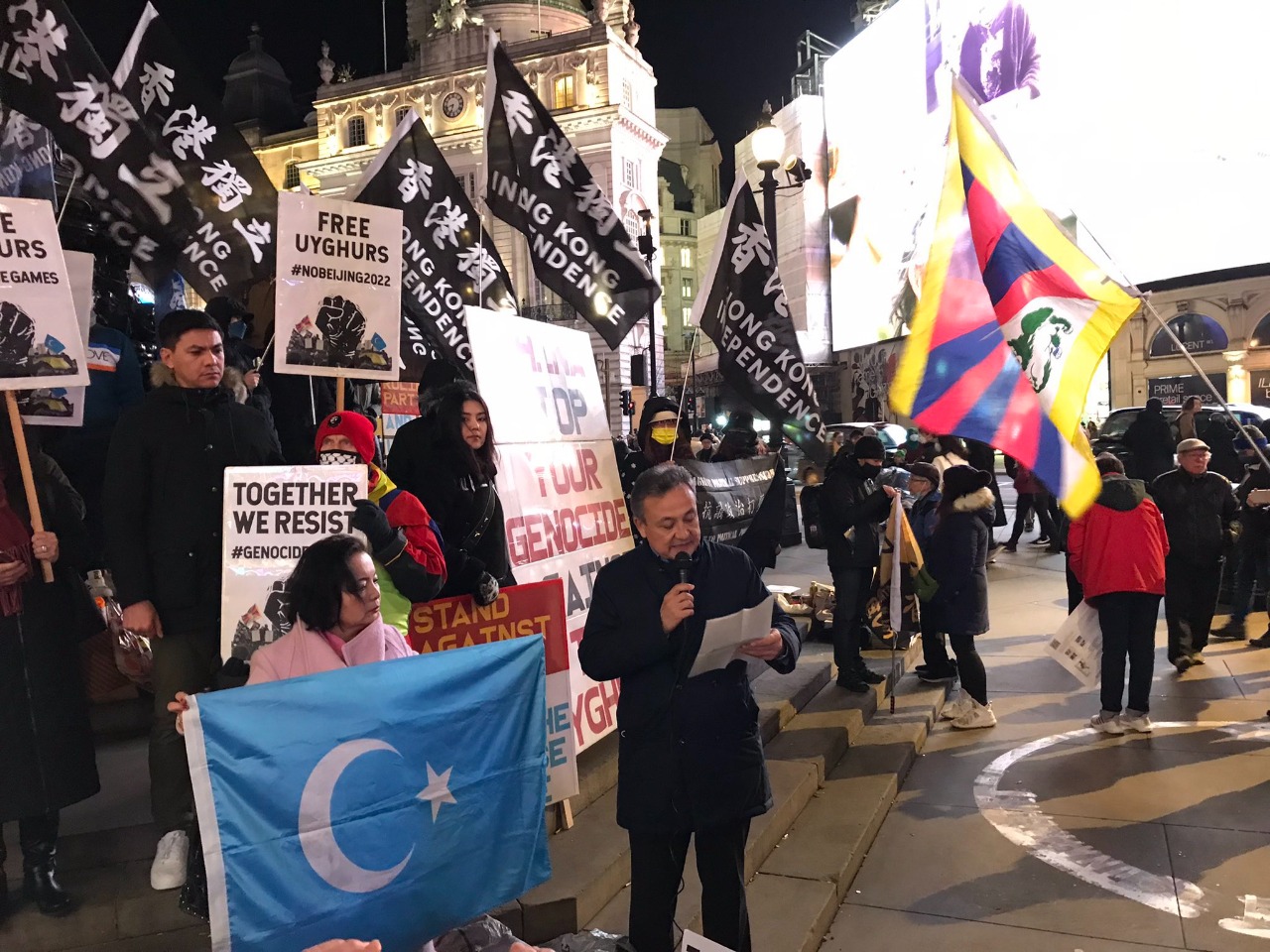 The activists chanted slogans “Free Tibet, Free Turkmenistan, Free Mongolia, Free Hong Kong, Boycott Beijing Olympics, no to CCP etc”.
The prominent people who addressed the gathering were Tsering Passang, Convenor of Global Alliance for Tibet and Persecuted Minorities (GATPM), Dolkun Isa, President of WYC, Rahima Mehmut (World Uyghur Congress), John Jones, Tenzin Rabga, Pema and leaders from Hong Kong.
A speech sent by Dhondup Wangchen — a famous Tibetan filmmaker and activist who was in a Chinese prison for making a film on Tibetans — was read by Tsering Passang.
During their addresses, the speakers urged the international community to boycott CCP and hold it accountable for the mass human rights violations perpetrated by it against the minority communities in China and other occupied territories.
They demanded freedom for Tibet, East Turkmenistan, Hong Kong, Southern Mongolia and other forcibly occupied territories.
The speakers also called upon world leaderships to boycott Beijing Olympics-2022 as games and human rights violations cannot go together.

The hundreds of protestors then marched, in the form of a rally, towards Piccadilly Circus and organised a protest demonstration there.
The rally passed through prominent places and stopped outside the British Foreign Office (FCDO), Whitehall, where they stopped and protested against the Chinese regime. They highlighted the atrocities committed by the CCP leaders against Uyghurs and Tibetans and other persecuted minorities.
Carrying flags and placards, protesters afterwards marched toward BBC Headquarters in London where they submitted a joint petition to the BBC.
The protestors urged BBC to drop Beijing 2022, and not to broadcast it. The protestors were chanting slogans No rights! No games! No broadcasting of Beijing 2022.
Massive Anti-China protest was held outside the office of the British Olympic Association, London. Together with Uyghurs and Hong Kongers, the Tibetans jointly delivered over 7000 signed petitions to boycott Beijing Olympics at the British Olympic association office in London.
The prominent organizations who participated in this rally and protest demonstration were Global Alliance for Tibet and Persecuted Minorities (GATPM), Free Tibet, International Tibet Network, World Uyghur Congress and Hong Kong Aid.
In a related development, a similar protest demonstration is being held in Manchester-UK on December 11, 2021 which would be addressed by Tsering Passang, Convenor GATPM.
Global Alliance for Tibet and Persecuted Minorities is currently organising a week-long series of events to highlight the atrocious behaviour of CCP against the minority communities in China and occupied territories.
The GATPM has recently worked on a research paper and published a report titled’ 100 Atrocities Committed By Chinese Communist Party (CCP)’.
A report was released by Tim Loughten, British MP and Chair of All party Parliamentary Group on Tibet (APPG-T) on 10th of December the World Human Rights Day.
The report has been appreciated by a number of British MPs and Human Rights activists across the world as it mentions about 100 most infamous atrocities committed by CCP against the minorities. (ANI)

Why the ‘run philosophy’ is gaining momentum in COVID-zero China

China Container Terminal : The Company announced the elective list for the 19th term

‘We are listening’: Penny Wong extends olive branch to Pacific nations as…

Live news updates from May 26: Putin confident Russia can shrug off sanctions impact,…

China’s growth cloud may have a silver lining | Financial News

Election 2022 results: Penny Wong to give address in Fiji

‘Matter of urgency’: Albanese doubles down on China power play

What you need to know about China-Taiwan tensions