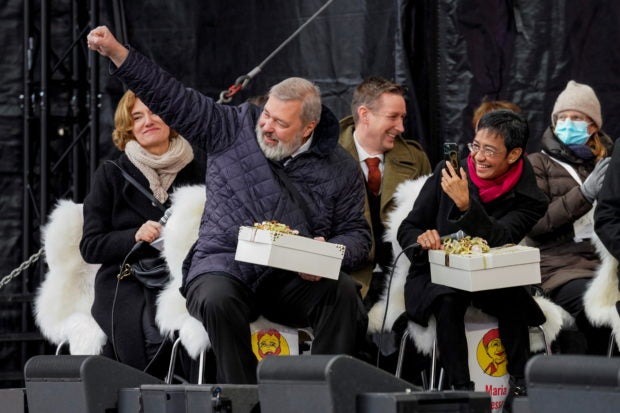 OSLO –People in positions of power in Russia are actively promoting the idea of war, and conflict with Ukraine is now distinctly possible, Nobel Peace Prize laureate Dmitry Muratov said on Friday.

Receiving his award at Oslo City Hall, Muratov said it was common in Russia to think that politicians who avoided bloodshed were weak, while threatening war was “the duty of true patriots”.

Muratov, editor-in-chief of Russian newspaper Novaya Gazeta, won the 2021 award jointly with Maria Ressa of the Philippines, co-founder of news site Rappler, in recognition of their fight for freedom of expression.

“The powerful actively promote the idea of war,” he said. “Moreover, in (the) heads of some crazy geopoliticians, a war between Russia and Ukraine is not something impossible any longer.”

U.S. officials have said Russia could soon invade Ukraine following a build-up of troops near the Ukrainian border. Moscow has denied it is planning an invasion.

Muratov also said journalism in Russia was going “through a dark valley”, with over a hundred journalists, media outlets, human rights defenders and non-governmental organisations having been branded as foreign agents.

“In Russia, this means ‘enemies of the people’,” Muratov said, dedicating his prize to all investigative journalists, and to colleagues at Novaya Gazeta killed because of their work.

“Our greatest need today is to transform that hate and violence, the toxic sludge that’s coursing through our information ecosystem, prioritised by American internet companies that make more money by spreading that hate and triggering the worst in us,” she said.

“For the US, reform or revoke section 230, the law that treats social media platforms like utilities.”

Ressa and Muratov are the first journalists to receive the Nobel prize since Germany’s Carl von Ossietzky won the 1935 award for revealing the Nazis’ secret rearmament programme.

Ressa noted in her speech that Von Ossietzky was never able to collect his award as he was held in a concentration camp and died in custody.

“By giving this to journalists today, the Nobel committee is signalling a similar historical moment, another existential point for democracy,” she said.

Don’t miss out on the latest news and information.

Pro-Moscow Kherson official sees decision ‘toward next year’ on joining…

Putin’s war grinds on, with dissent from Russian hawks and peace-seekers

Severodonetsk mayor says at least 1,500 people have been killed

Biden And Xi Jinping Speak For The 1st Time In Months Amid Fraying U.S.-China Ties