Archaeologists believe a skeleton of a man with a nail through his heel, unearthed during excavations in England, is the first example of crucifixion in northern Europe, it was revealed Wednesday.

Experts from the Albion Archaeology heritage services company found the skeleton in the village of Fenstanton in eastern England while excavating a roadside settlement in 2017.

The site was found near a road linking the then-Roman towns of Cambridge and Godmanchester, according to The Guardian.

The skeleton was found with a nail through its heel bone, which experts say is the most reliable physical evidence of crucifixion in the Roman world, the report said.

DNA analysis showed the man was not genetically related to any of the other 48 bodies found at the site, and was from the local population.

Experts said more information pertaining to the man’s identity, the reason for his crucifixion, and where it was conducted, would likely be never known.

Romans are thought to have reserved crucifixion for condemned slaves, rebels, and people of a lower class. 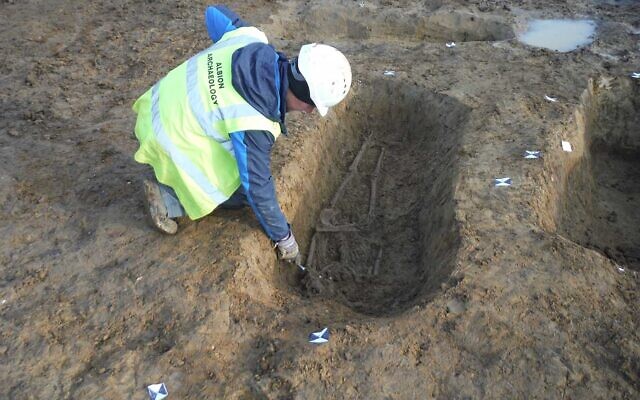 The dig during which the skeleton with a nail through its heel was found discovered in Fenstanton, England (Courtesy: Albion Archaeology)

Archaeologist Vassilios Tzaferis found a similar heel bone with a nail through it in Jerusalem in 1968 during the excavation of tombs from a massive Second Temple Jewish cemetery, dated to the 2nd century BCE to 70 CE, in the Giv’at HaMivtar neighborhood.

According to a 1985 Biblical Archaeology Review article written by Tzaferis titled, “Crucifixion — The Archaeological Evidence,” the Romans did not create the excruciating form of capital punishment.

“Many people erroneously assume that crucifixion was a Roman invention. In fact, Assyrians, Phoenicians and Persians all practiced crucifixion during the first millennium BCE,” wrote Tzaferis.

Amanda Borschel-Dan contributed to this report.

US: Turkey’s NATO issues with Sweden, Finland will be fixed

‘Message to the world’ – Lithuanians fundraise to buy drone for…

EXPLAINER: What Turkey’s Erdogan could gain in NATO debate

WHO condemns Russia’s aggression in Ukraine in rare vote, rejects…