The gold to oil ratio is an important indicator of the global economy’s health.

Because gold and crude oil are both denominated in US dollars, they are strongly linked. That is because as the US dollar rises, commodities priced in USD fall, and vice versa. As the dollar drops, commodities generally go up.

Another important link between gold and oil is inflation. Because energy comprises about one-third of the Consumer Price Index (CPI), when crude oil rises it impacts inflation. Gold being a traditional inflation hedge, it follows that as higher oil prices lead to increased inflation, the gold price goes up, as more investors buy gold to diversify out of inflation-losing assets like bonds and cash.

Gold and oil are further related in that a spike in oil prices dampens economic growth, because so many industries depend on it and its derivatives as a fuel source, i.e., natural gas, gasoline and diesel.

(Diesel fuel is a major input for gold mining operations, therefore as fuel costs rise, so does a producer’s costs per ounce, which can lead to lower output. If this happens across the industry, lower gold supply versus demand will hike prices). 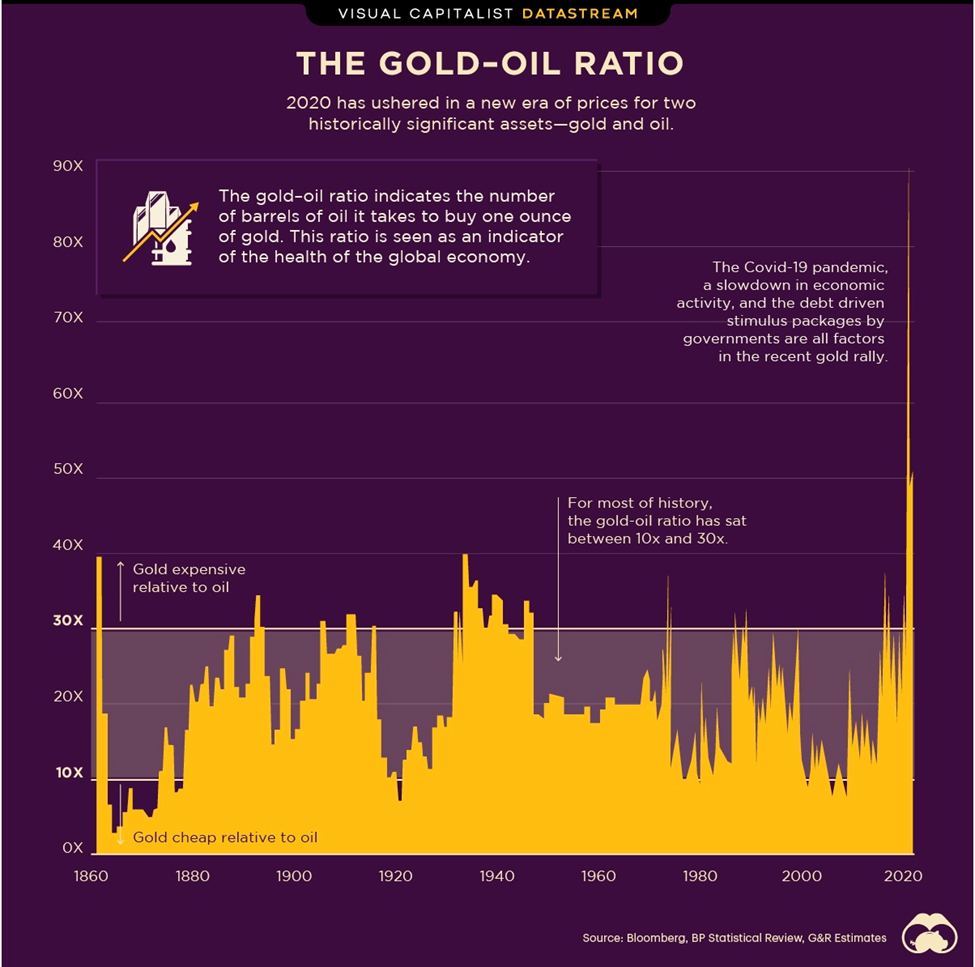 A drop in global growth, particularly in the two largest economies, the United States and China, might signal a recession is coming which is almost always bullish for gold prices.

The chart below shows the historical ratio between the gold price and West Texas Intermediate (WTI) crude. Simply put, the gold to oil ratio is how many barrels of oil can be bought with an ounce of gold. 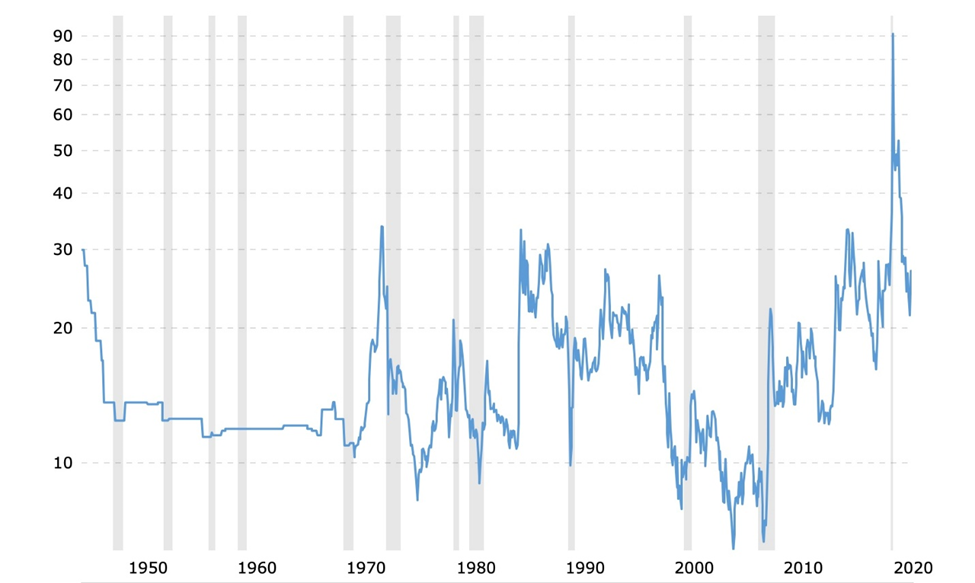 The chart is interesting for a number of reasons.

Notice that almost all of the low points in the chart, when the ratio was below the historical average of 16, correspond to recessions (gray bars). This makes sense due to the fact that crude oil declines go hand in hand with low economic growth. 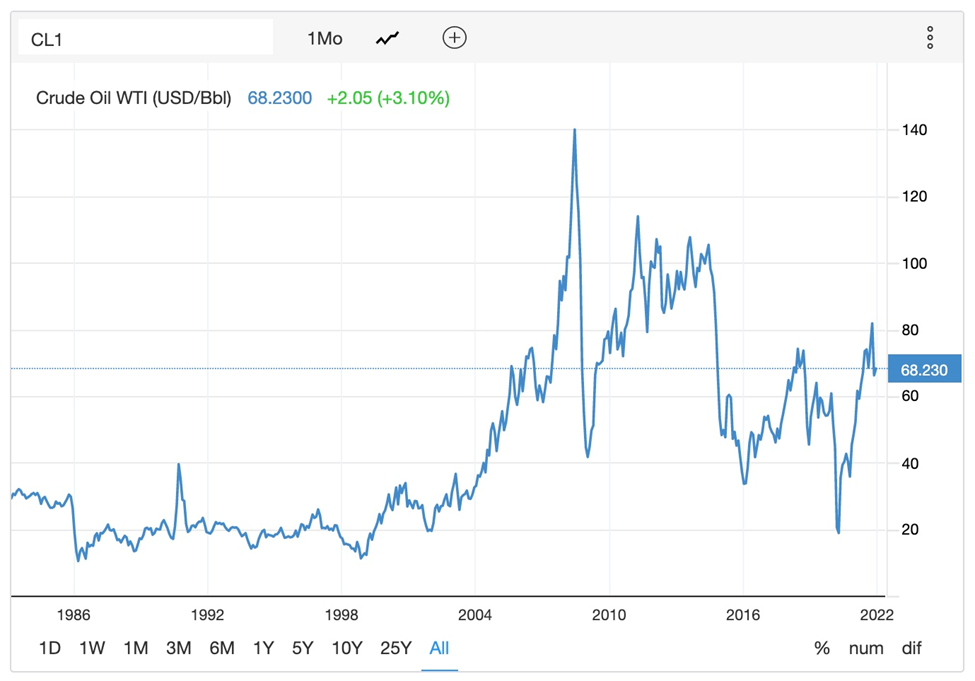 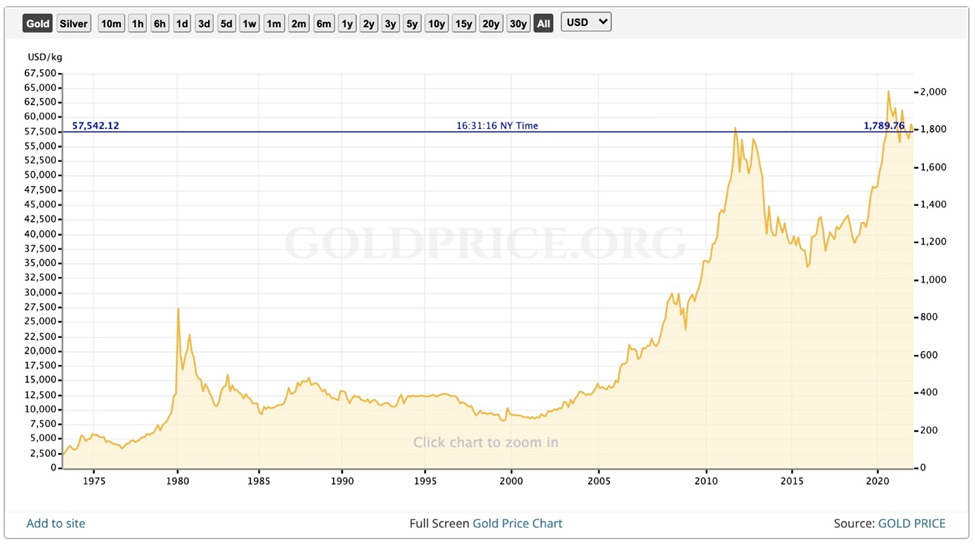 For what’s been happening with the gold to oil ratio recently, it helps to consult the five-year chart below. The ratio spikes to an “off the charts” 91 in April 2020, the worst month of the coronavirus pandemic, before recovering about half to 46.62 in May, from which point it continues to fall to the current December 2021 ratio of 25.5. The all-time high of 91 in April 2020 was a combination of plummeting WTI which at that time was $16.80 against a gold price of roughly $1,625. Remember oil usually falls during recessions and gold rises. However the covid-19 recession was extremely short-lived, depicted in the historical gold to oil ratio chart as a very thin gray line. As economies recovered, growth and oil demand surged, thus lowering the ratio. When gold hit its all-time high of $2,034 in August 2020, WTI was still floundering at around $32. It took a more than doubling of WTI over the next 15 months, and gold to fall around $200, for the ratio to revert back to 25, a long way from its historic high of 91 but still higher than its average 16. 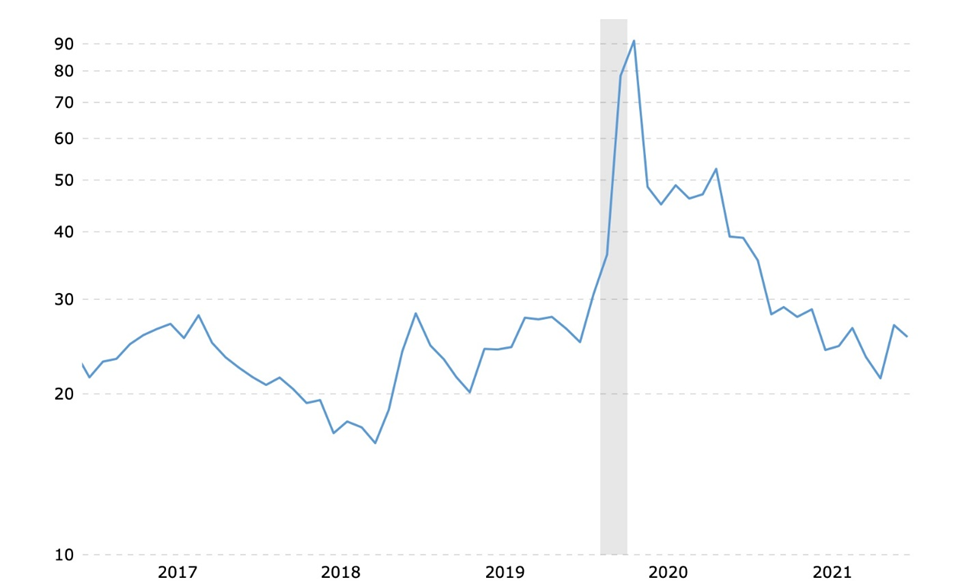 This year China and Europe experienced an energy crisis.

Flooding across China’s key coal-producing provinces, resurgent demand for Chinese goods in the wake of pandemic easing, and market distortions including power rationing and price controls, were behind an energy shortage that pushed coal and natural gas prices to record highs.

Natural gas futures hit a record earlier this year, climbing several times from their May 2020 lows, as the graph below by Sunshine Profits shows. 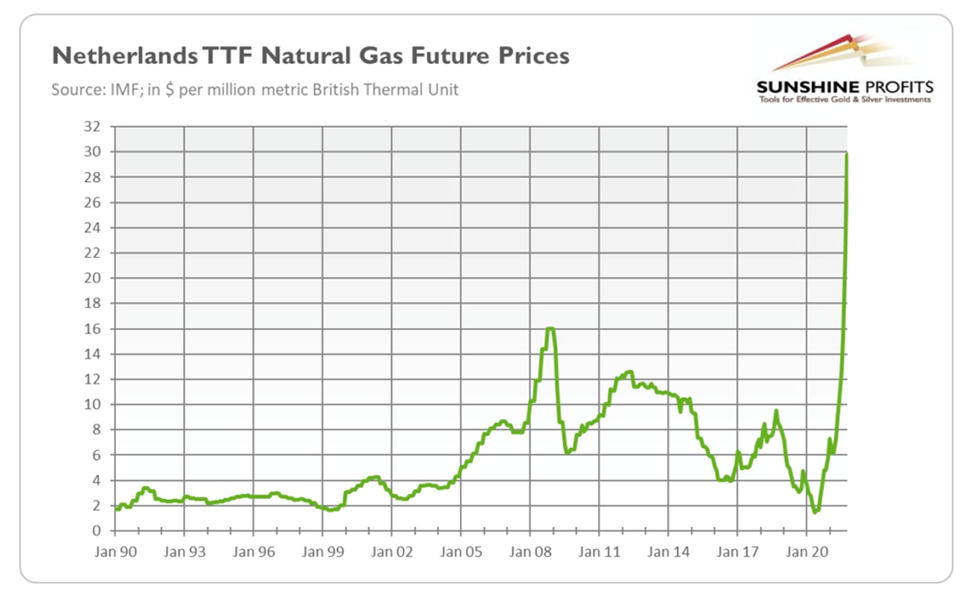 The price rise was not only due to last year’s depleted inventories and a cold autumn, but a faster than expected recovery from the pandemic, ultra-low interest rates and record-level government spending on pandemic relief that boosted spending and increased demand for energy.

More fundamentally, the decline in energy prices in response to the economic crisis of 2020 prompted many producers to stop drilling and later supply simply didn’t catch up with surging demand, Sunshine Profits states.

Oil reportedly extended gains to the highest in three weeks, last Thursday, as US crude stockpiles dropped the most since September.

The usual energy market dynamics are being overshadowed by the global transition from fossil-fueled energy generation to renewable power sources namely wind, solar and hydro.

As governments and institutional investors divest themselves of funds that traditionally flowed into fossil fuels, i.e. coal/ oil & gas producers, or pipeline infrastructure, they are trying to bring on renewables to replace the lost output. Read more here

However, with this year’s calm conditions in Europe generating little wind energy, and with no easy way to store the energy generated from renewables, utilities are finding they must continue to utilize “dirty” coal and NG, despite commitments to lessen their dependence on fossil fuels to fight climate change.

In fact according to new data from the International Energy Agency (IEA), global power generation from coal this year is forecast to soar 9%, to an all-time high of 10,350 terawatt-hours. Coal use is being driven by a huge increase in natural gas prices, with power plants sourcing coal as a cheaper alternative.

“The rebound is being driven by this year’s rapid economic recovery, which has pushed up electricity demand much faster than low-carbon supplies can keep up,” the IEA said, via Mining Weekly.

The organization notes that energy-intensive industries like cement and steel are expected to increase coal demand by 6% in 2021, and says a new record high could be set in 2022.

Asia dominates the global coal market with China and India accounting for two-thirds of demand.

“Coal is the single-largest source of global carbon emissions, and this year’s historically high level of coal power generation is a worrying sign of how far off track the world is in its efforts to put emissions into decline towards net zero,” said IEA executive director Faith Birol.

“Without strong and immediate actions by governments to tackle coal emissions — in a way that is fair, affordable and secure for those affected — we will have little chance, if any at all, of limiting global warming to 1.5 °C.”

In Europe, all eyes are on the weather as the northern hemisphere winter sets in, and how the cold could affect energy demand and supply.

Natural gas prices in Germany and France are already at record highs while the weather is relatively mild; the forecast calls for colder than normal for the rest of December and into January. 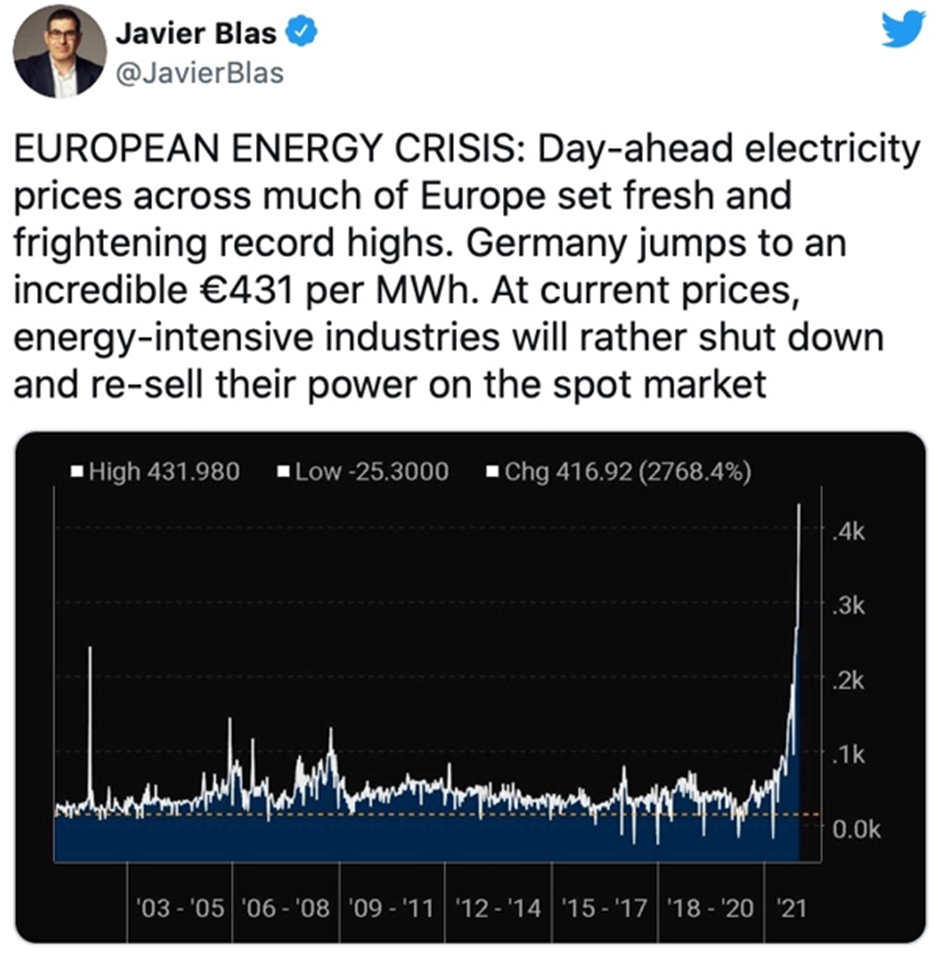 Bloomberg reports Surging energy prices are driving inflation and forcing gas-hungry industries to curb output. If it’s cold too, then rolling blackouts could be a last resort.

Analysts say it would only take a few degrees colder to trigger a market meltdown. The worry is that, while there is currently enough natural gas capacity to see the region through the winter, it could run out before the weather warms up.

Geopolitical tensions are also playing into the energy crisis. There is the potential for Russian gas destined for Europe to be curbed or halted completely if Russia invades Ukraine. A conflict could also further delay the start of the Nord Stream 2 pipeline linking Russia and Germany.

Commodities consultant Wood Mackenzie says if Russian gas exports stay at current levels, Europe’s storage sites will be 15% less full at the end of March, the lowest on record.

“We believe there is a high likelihood of both prolonged and even higher prices through winter with after-effects that could stretch beyond the next two years,” Bloomberg quoted Nathan Piper, head of oil and gas research at Investec Bank Ltd.

Making matters worse, a third of France’s nuclear capacity will be halted in January and three of Germany’s nuclear…

What will happen to the price of gold in 2022? | MoneyWeek

Will stagflation lead to higher gold prices in 2022? [Video]

Gold price down as bond yields, USDX up