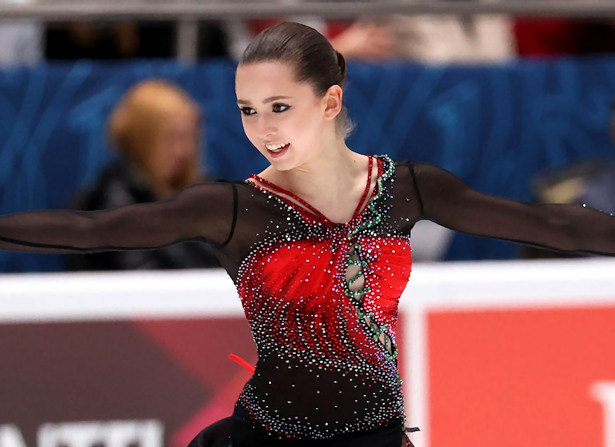 Kamila Valieva performs her Free Skate to “Bolero” at the 2022 Russian National Figure Skating Championships on Saturday in St. Petersburg.

The Women’s competition at Russian Nationals get better every year as does the incredible Kamila Valieva who skated confidently to her first national title with 35 points to spare on Saturday. Alexandra Trusova came from fifth to take the silver while three-time and defending champion Anna Shcherbakova earned the bronze medal.

Valieva had a comfortable lead following her spectacular Short Program that featured a big triple Axel. The 15-year-old hit a quad Salchow, triple Axel, quad toe-triple toe, quad toe-Euler-triple Salchow as well as four more triples in her dynamic performance to Maurice Ravel’s “Bolero”. Her quads look as easy as triples for others. Her spins are amazing, her speed is impressive and it is very hard to find anything to criticize about her. Valieva netted 193.10 points and totaled 283.48 points – which would have had her first in the Men’s competition as well (in spite of a lower program components multiplying factor).

“Today, the crowd support was great and even when I got tired, it gives me new energy,” Valieva shared. “I am very happy that I was able to pull myself together, even though I was a little shaky. I did almost my maximum. I wouldn’t say that I am not in my best shape yet, more kind of in between good and average shape.”

When she said this, the journalists, as well as Trusova and Shcherbakova laughed. “We’ll now have a short break, we can rest and get new energy.”

Trusova had missed the triple Axel in the Short Program and stood in fifth place. The 2021 World bronze medalist opened her program to the Cruella soundtrack with a quad flip, but then went down on the quad toe. She recovered to land a quad Lutz-Euler-triple Salchow, quad Lutz-triple toe and two more clean triples. Trusova scored 174.44 points and had 258.65 points overall.

“I wanted to skate better, but the quad toe did not work. Overall, I am still happy with the result,” the 2020 European bronze medalist stated. Asked why she did not go for a quad Salchow, she explained: “The (quad) Salchow and triple Axel are harder for me than the flip, Lutz and toeloop, probably because they are edge jumps.”

Trusova said that she was off the ice for three weeks due to her foot injury and only started training again a month ago.

Skating to music from Master and Margarita, Shcherbakova fell on her first jump, a quad flip, but produced six clean triples, only the triple loop in combination with a triple Lutz was two-footed. The reigning World Champion ranked fourth in the Free Skating with 158.10 points and overall slipped from second to third at 239.56 points.

“At this Russian Nationals I am pleased with the Short Program and not happy with the free skating,” Shcherbakova commented. “I want to take a positive lesson out of that. I know what I have to work on and how to improve my performances.”

Adeliia Petrosian landed two quad loops – she is the first female skater to perform this jump in competition, so far only nationally – and six triples in her routine to “Paint It Black” program to finish fourth in her debut at senior Nationals (233.97 points).

“The quad loop started to work out about three months ago and we decided to include it into the long program,” explained Petrosian, who trains with the top three skaters in Eteri Tutberidze’s school in Moscow. “At this time, I had problems with the quad toe.”

Sofia Samodelkina did a triple Axel in the Short Program and went for three quads in the Free Skating, but only the quad Salchow-double toe was clean while the quad Lutz and the second quad Salchow were underrotated. She came fifth at 233.09 points.

“I am glad that I was able to skate my long program clean and that I made the national team for next year,” Samodelkina commented. “We looked at which quad was going better in practice, Lutz or toe, and that one we put first in the program.”

Crowd-favorite Elizaveta Tuktamysheva missed the triple Axel in the Short Program, but came back strong in the Free with two triple Axels and five triples. However, the second Axel was underrotated and her effort was not enough to pull up and she remained in seventh place with 224.40 points.

“Today I was much calmer than yesterday,” the 2021 World silver medalist told the press. “My head was clear, my body more confident. The most important thing for me today was to do the two triple Axels. After that, I got so excited that I almost fell. I did what I could do, now I want some rest.”

Petrosian, Samodelkina and Muravieva are not age-eligible for international senior-level competitions, so Tuktamysheva probably will be named first substitute for the team for Europeans.

Trudeau says western countries need to stand together against China