Conor McGregor met Russian president Vladimir Putin during the 2018 FIFA World Cup final. The former two-division UFC champion was present at Luzhniki Stadium in Moscow on July 15, 2018 to witness France and Croatia compete for the biggest prize in soccer.

Both McGregor and Putin were all smiles during the interaction and even posed for pictures together.

While posing for pictures, McGregor initially put his arm around Putin’s shoulder. However, the president’s security guards immediately asked the Irishman to remove his hand, which made McGregor awkwardly comply.

Mcgregor thought Putin was his buddy 😂😂. The bodyguard wasn’t having Conor touching Putin like that.

Mcgregor thought Putin was his buddy 😂😂. The bodyguard wasn’t having Conor touching Putin like that. https://t.co/cAYf1PJXDU

Check out the video of McGregor’s interaction with Putin below: 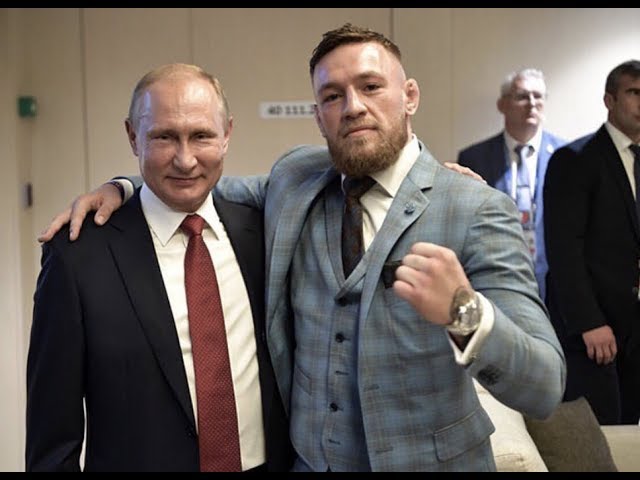 McGregor later shared a picture of himself and Putin on Instagram, congratulating and thanking the Russian president on an “amazing World Cup”:

“Today I was invited to the World Cup final as a guest of Russian President Vladimir Putin. This man is one of the greatest leaders of our time and I was honored to attend such a landmark event alongside him. Today was an honor for me Mr. Putin. Thank you and congratulations on an amazing World Cup.”

Conor McGregor gifted Vladimir Putin the first-ever bottle of Proper Twelve Irish whisky. McGregor revealed that he wasn’t allowed to share a drink with the president or to give the bottle to Putin personally.

In a press conference in 2019, Conor McGregor said security tested the bottle first before handing it over to the Russian president:

“They had to take the liquid from the bottle to make sure the liquid was safe and it was not maybe poisoned or what not and then it was gifted to Vladimir Putin… I haven’t got to speak to him since to see what he thought of it, although I’m sure he did have a taste and I’m sure he enjoyed it.”

Conor McGregor will return to MMA sparring in April 2022 after breaking his leg against Dustin Poirier in July. He has made no secret of his desire to face UFC lightweight champion Charles Oliveira upon his return to the octagon.

Dozens of nations were involved in the slave trade. How should they compensate

The CIA chief says Putin is ‘entirely too healthy.’ What do we really…

Kremlin slams reports that Putin is unwell as ‘fakes’; Ukraine could…

Russia’s war aims in Ukraine widen, U.S. says any annexations will be…

Trump getting reelected in 2024 would solve ‘all of Russia’s…

Meet the Putin Lovers Who Want Him to Invade Their Country