President Biden and Vice President Harris commended NASA on their launch of the revolutionary James Webb Space Telescope after it successfully began its one million mile journey from Earth.

The new $10 billion telescope, which is hoped will be able to examine 13.5 billion years of cosmic history, completed its first mid-course correction burn on Saturday night after launching from the European Space Agency’s base in French New Guinea earlier in the day.

The mid-course correction burn began at 7.50PM ET (12.50AM GMT) and lasted 65 minutes. It is considered a time-critical milestone of the launch in the beginning of the journey, according to NASA.

Both Biden and Harris took to Twitter to congratulate the space agency on the launch of the new telescope following a lengthy period of delays.

‘Congratulations @NASA and all who made today’s launch of the James Webb telescope possible. Webb is a shining example of the power of what we can accomplish when we dream big. We’ve always known that this project would be a risky endeavor, but with big risk comes big rewards,’ Biden tweeted.

‘This launch from @NASA is an important moment in history. The Webb telescope will allow us to make new advancements in science and our understanding of the universe. Congratulations to everyone who helped make this million-mile journey begin!,’ Harris tweeted.

Following a 29-day journey, the telescope is expected to reach the Sun-Earth Lagrange Point 2 (L2) which is approximately 930,000 miles (1,500,000 kilometers) from our planet facing the direction of Mars. 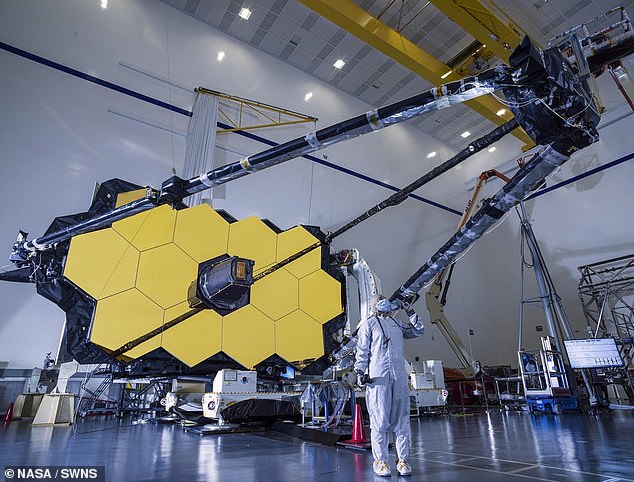 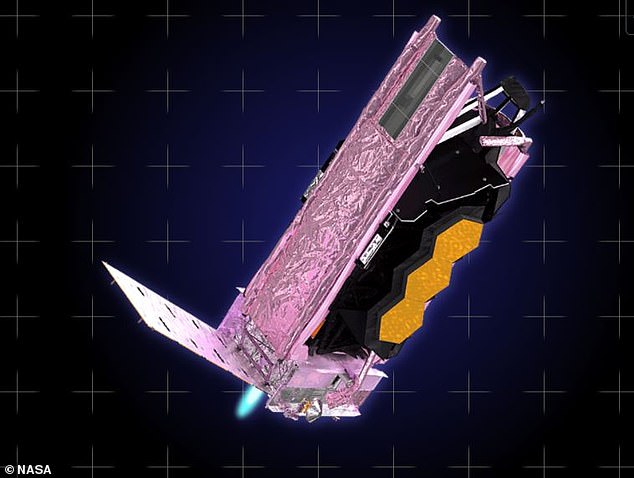 The telescope made its first mid-course correction burn at around 7.50PM ET (12.50AM GMT) which lasted about 65 minutes 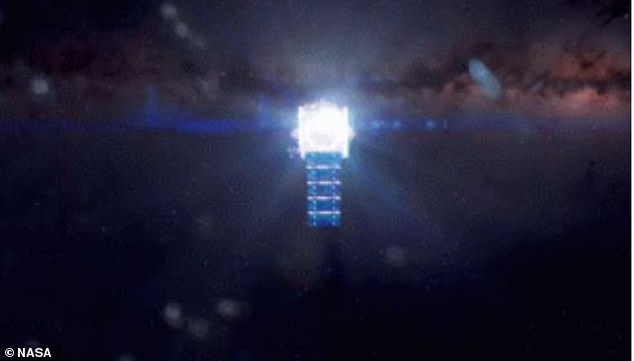 A successful Christmas Day take off for the telescope had been dubbed a ‘Christmas miracle’ after the project suffered a series of delays in the South American country’s rainy season.

But at 7.20am ET (12.20PM GMT) the world’s most powerful space telescope, equipped with an Ariane 5 rocket, took off from the European Spaceport facility in French Guiana in magnificent form before blasting skywards over the Atlantic Ocean.

The first mid-course correction burn was made on December 25 at around 7.50PM ET (12.50AM GMT) which lasted minutes

The milestone burn adjusts the telescope’s trajectory found toward the Sun-Earth Lagrange Point (L2) which is approximately 930,000 miles (1,500,000 kilometers) from our planet facing in the direction of Mars

In order to prevent an overexposure of thrust, three mid-course correction maneuvers are made in total

Cheers were on pause for another nerve-wracking 27 minutes as the rocket ejected its boosters and soared to an altitude of 870 miles (1,398km) before finally detaching the telescope to begin its own journey.

With its liftoff, a spokesperson for NASA said, ‘Webb will usher in a new era of astronomy’.

Stéphane Israël, the CEO of Arianespace which provided the Ariane rocket, said: ‘We launch for humanity this morning from the Guiana Space Center. We know what Webb is about, and after Webb we will never see the skies in quite the same way again.’

Webb is intended to replace its 30-year-old counterpart Hubble, as it is about 100 times more sensitive and is expected to profoundly transform scientists’ understanding of the universe and our place in it.

The new telescope’s special orbital path will keep it in constant alignment with Earth as the planet and telescope circle the sun in tandem.

The project, which started in 1996, is an international collaboration led by NASA in partnership with the European and Canadian space agencies.

It had been hit by months of launch delays, which followed years of delays to its construction, with the first launch date scheduled in 2007.

Ahead of the launch, it was loaded into the fairing of an Ariane 5 rocket, and moved on to the launch pad at the Europeans Space Agency facility in French Guiana.

Live coverage of the launch was provided on NASA’s TV channel and website kicking off at 06:00 ET (11:00 GMT).

Officials had confirmed that the Ariane 5 was in good shape, and that the only problem facing the launch was the start of the rainy season in French Guiana. 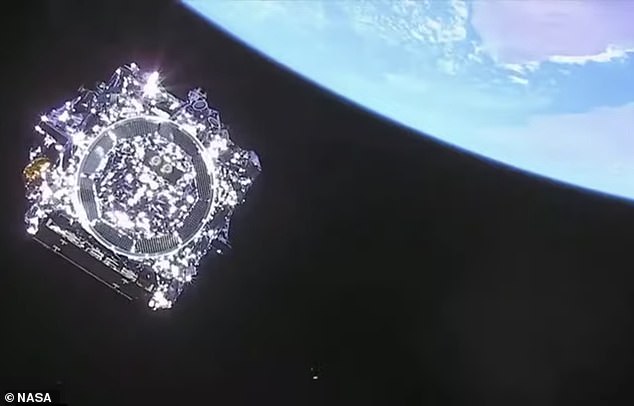 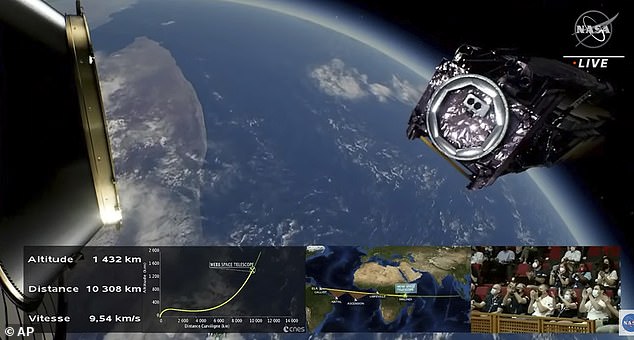 After a perfect flight out of the Earth’s atmosphere and into space, the James Webb telescope module detached from the body of the Ariane 5 rocket that had blasted it skywards, leading to cheers from nervous scientists at mission control in Kourou, French Guiana

Work on the James Web Telescope, also known as JWST or Webb, first began in 1996 and at the time NASA had just a $500 million budget to complete it.

The agency was set to launch it in 2007, but cost overruns and technical issues forced a major redesign in 2005 that led to its first delay.

Construction of the telescope was completed in 2016, allowing testing to begin, but two years later the massive sunshield ripped during a practice run that led to another postponement. 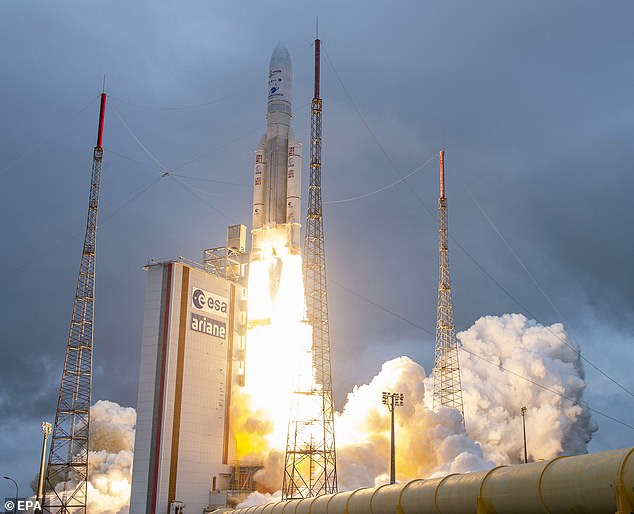 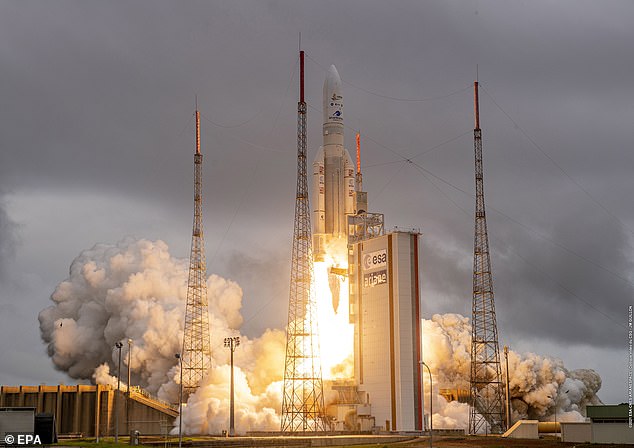 Pictures from the European Space Agency’s Spaceport facility in French Guiana show the Webb telescope module atop an Ariane 5 rocket blasting off from Earth at 7.20AM ET (12.00PM GMT) on its million-mile journey into solar orbit 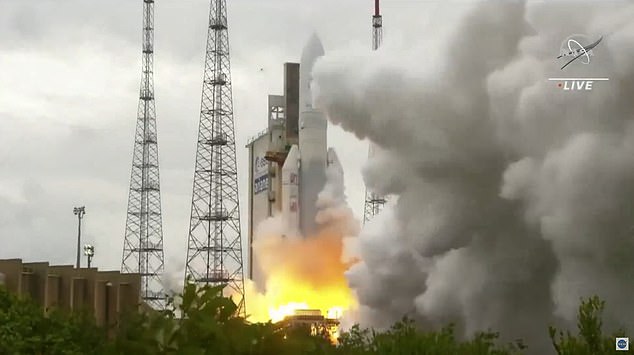 At 7.20am the world’s most powerful space telescope, equipped with an Ariane 5 rocket, took off in magnificent form before blasting skywards over the Atlantic Ocean. Pictured: The rocket at lift off 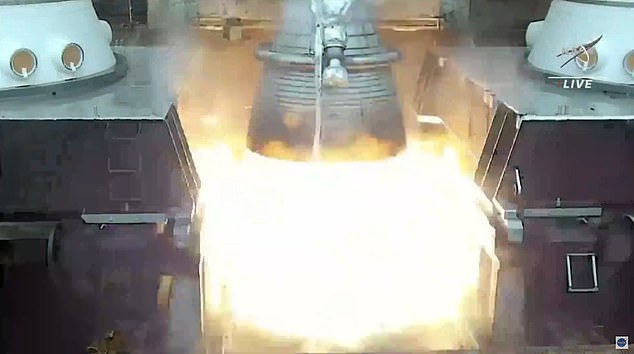 We have ignition: Engines on the Ariane 5 rocket engage for a whole seven seconds at the spaceship warms up before lift off actually takes place at 7.20AM ET 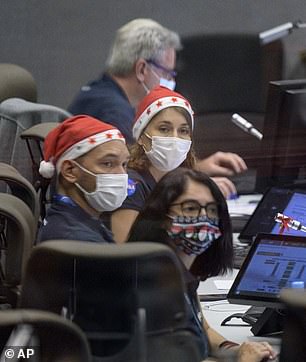 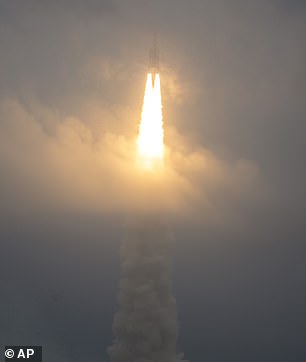 Cheers were on pause for another nerve-wracking 27 minutes as the rocket ejected its boosters and soared to an altitude of 870 miles (1,398km) before finally detaching the telescope to begin its own journey

And then the coronavirus pandemic that hit in 2020 caused even more delays.

In October 2021, James Webb finally arrived in French Guiana following a 16-day sea voyage onboard the MN Colibri, and was removed from the transport container prior to launch preparations.

Fuelling operations began on November 25, according to NASA, and took about 10 days.

The space telescope was then secured on top of the Ariane 5 rocket on Saturday, December 11, at the Guiana Space Center, as it geared up to launch on December 24.

But Mother Nature seems to have other plans and the mission is now a day later. 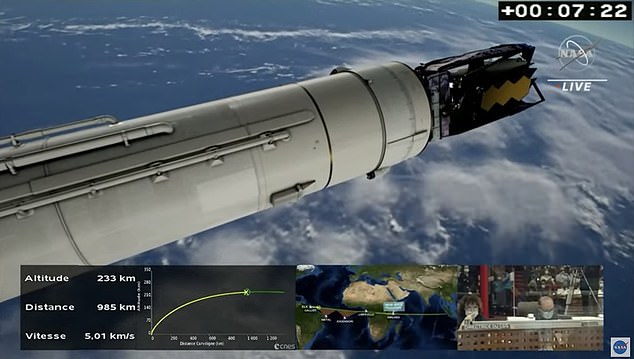 If all goes according to plan, the 14,000-pound instrument will be released from its French-built rocket after a 26-minute ride into space. Pictured: The NASA live stream showing the trajectory of Webb, atop Ariane 5 rocket as it continues on its path into space 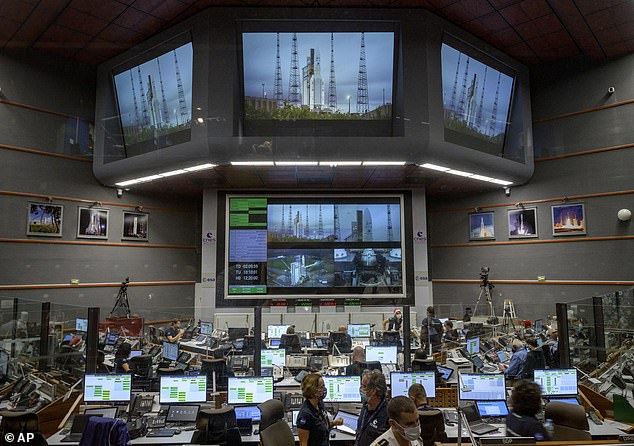 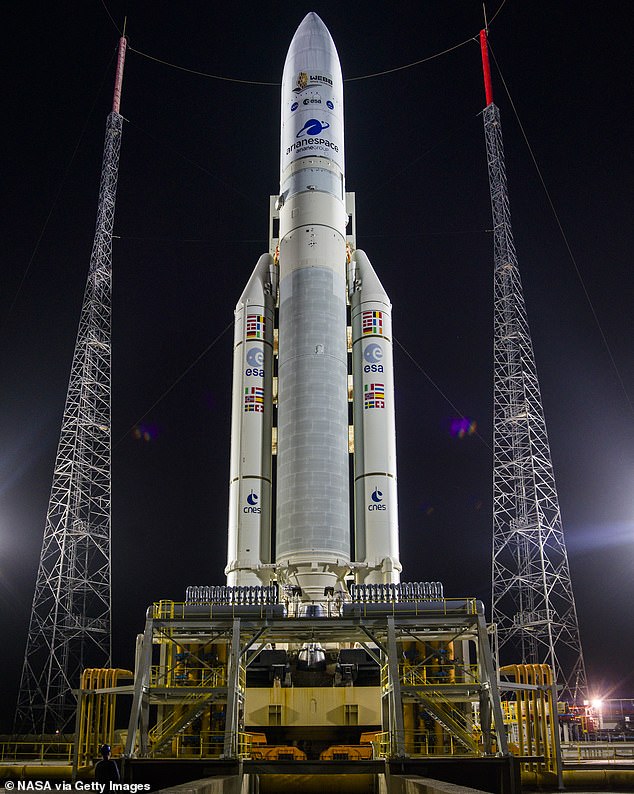 Dubbed a ‘Christmas miracle’ by anxious astronomers, the massive, next generation Jame Webb Space Telescope is finally on the launch pad, ready to go to space

About 28 minutes after its eventual blast-off, the James Webb will detach from its launch vehicle and begin ‘the most complex sequence of deployments ever attempted in a single space mission,’ NASA said.

NIRSpec (Near InfraRed Spectrograph) will also perform spectroscopy over the same wavelength range.

NASA sets launch dates for its return to the moon

Unusual radio signal detected by astronomers billions of light-years away