Qatar’s envoy to the Gaza Strip, Mohammad al-Emadi, said in a statement that Doha had signed a memorandum containing a pledge to invest $60 million in laying the pipeline for the proposed project.

But a final deal on the initiative, which has been in the works for years, has yet to be reached and could still be months or years away.

The so-called “Gas for Gaza” initiative is a complex diplomatic dance, involving Israel, Hamas, the PA, Qatar, Egypt and the European Union, among other players. The project seeks to replace the diesel fuel that currently powers Gaza’s electrical plant with Israeli gas.

Gaza has suffered from a chronic electricity deficit for more than a decade. The coastal enclave has only one power plant — which runs on imported diesel fuel — and experiences daily blackouts of between eight and 12 hours.

With Israel’s approval, Qatar since 2018 has periodically provided millions of dollars in cash to Gaza’s Hamas rulers to pay for fuel for the Strip’s power plant, fund infrastructure projects, and provide aid to tens of thousands of Gazan families. 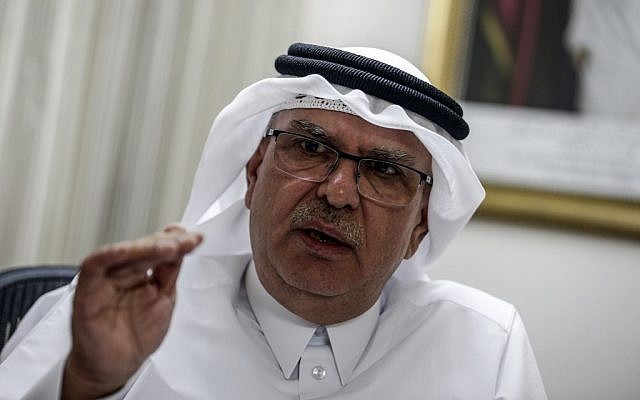 The Qatari envoy to the Gaza Strip, Mohammed al-Emadi, speaks during an interview in his office with AFP in Gaza City on August 24, 2019. (Mahmud Hams/AFP)

Transitioning Gaza from diesel fuel to natural gas is widely viewed as an important solution to the enclave’s electricity crisis. Talks on a natural gas pipeline have been in the works for years, without a clear timeline for success.

Under the proposal, natural gas would flow from Israel’s Leviathan gas field, which lies off Gaza’s coast, to southern Israel. The EU and Qatar would then fund extensions to the pipeline to Gaza’s power plant.

In February, Al-Emadi predicted that a final deal on the matter could be inked within six months. But the May battle between Israel and Hamas appeared to significantly set back the timeline on the project, as international attention turned instead to rebuilding the battered Gaza Strip following the war.

Tesla’s energy division achieves record quarter for everything except solar…

Europe Does A Complete U-Turn On African Oil And Gas | OilPrice.com

With Russian Cutoff Feared, Europeans Are Told to Curb Natural Gas Use

What Is Shell Doing On TikTok? | OilPrice.com