PICTURED: South Dakota girl, 2, who had to have liver transplant after contracting


A toddler had to have a liver transplant after being struck down by the mysterious wave of hepatitis that has infected at least 110 American children and killed five.

Two year-old Baelyn Schwab, from Aberdeen in South Dakota, initially fell ill on April 22 with hives, and ended up having a transplant just a fortnight later, on May 5.

The youngster suffers from allergies, so her mom Kelsea wasn’t overly concerned when she first spotted the welts last month.

But Kelsea, who lost her baby daughter Laramie to Sudden Infant Death Syndrome (SIDS) in December 2021, took Baelyn to their local emergency room anyway to be safe.

The toddler was sent home with allergy medication, only to wake-up with yellow eyes the next morning.

Her condition rapidly deteriorated after she was brought back to hospital by her mom the next day.

Recalling what the doctors said after doing a blood draw, Kelsea, who also has an older daughter, told CNN: ‘Couple of hours later they said you need to get to the hospital now and we’re going to fly you there.’

Kelsea says the news was additionally distressing in the wake of Laramie’s death, which came just 12 days before the little girl had been due to turn one.

She runs a farm with her husband, who doesn’t want to be named, and said of her family’s double-ordeal:  ‘I think I’ve cried so much in the last five months, I don’t have any tears left.

‘To be back in the hospital setting again, it’s like replaying in your head all day.’ 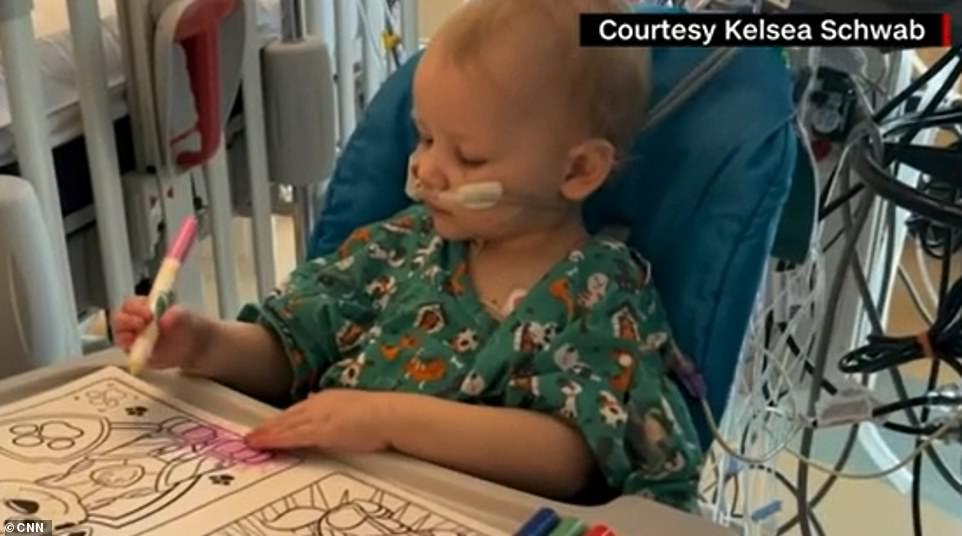 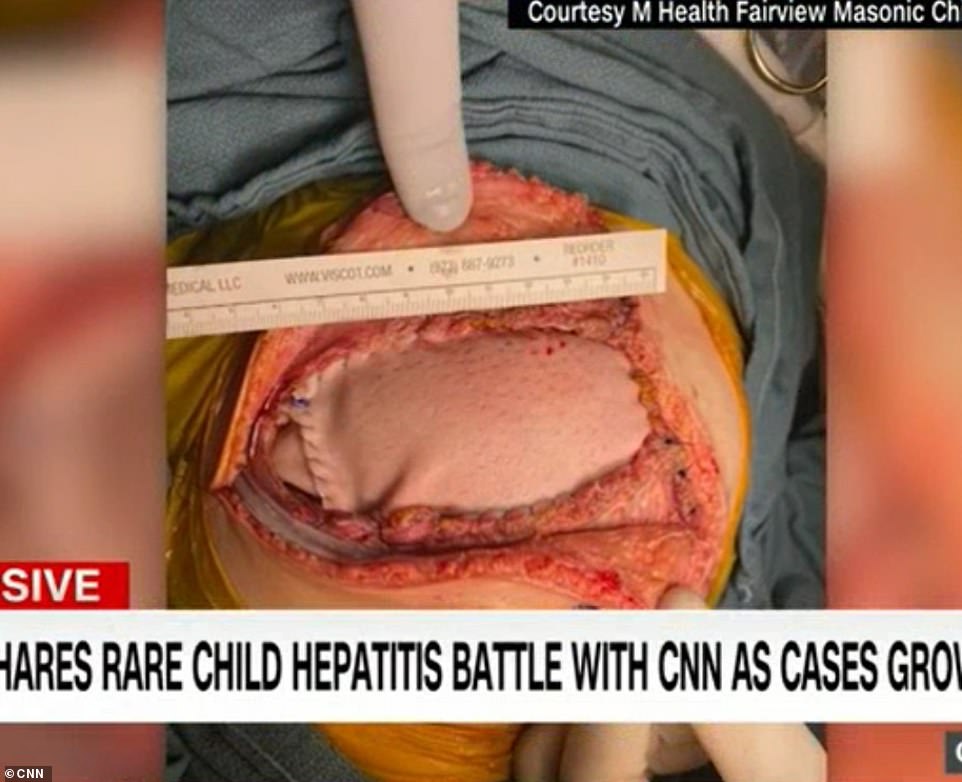 Baelyn’s donor liver is pictured after it was transplanted. She received the organ from an unidentified 16 year-old from Texas 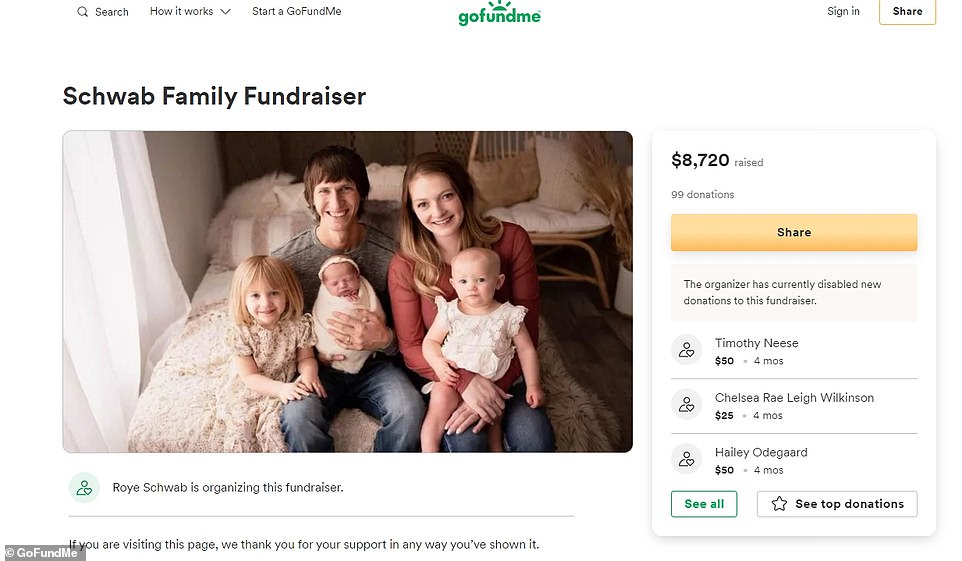 Baelyn is pictured with her mom, dad, older sister and baby sister Laramie, who died of Sudden Infant Death syndrome in December, 12 days before her first birthday

Baelyn was flown to the prestigious M Health Fairview Masonic Children’s Hospital in Minneapolis, where her condition continued to decline.

The levels of ammonia in her liver crept dangerously high – to 109 –  well above a healthy level of 25 to 40 – suggesting to doctors that the organ was failing.

Dr Srinath Chinnakotla, a surgeon from M Health Fairview, said Baelyn had gotten so sick they feared she was on the verge of falling into a coma and suffering permanent brain damage or a painful death.

That prompted them to schedule a liver transplant for Baelyn just two weeks after she first fell ill.

Baelyn’s age meant she got top priority for the procedure, and a donor liver from an unidentified 16 year-old who died in Texas was found shortly afterwards.

She is one of 15 child hepatitis sufferers – all of whom were previously healthy – to have had a transplant in recent weeks, with doctors still mystified as to what is causing the outbreak. 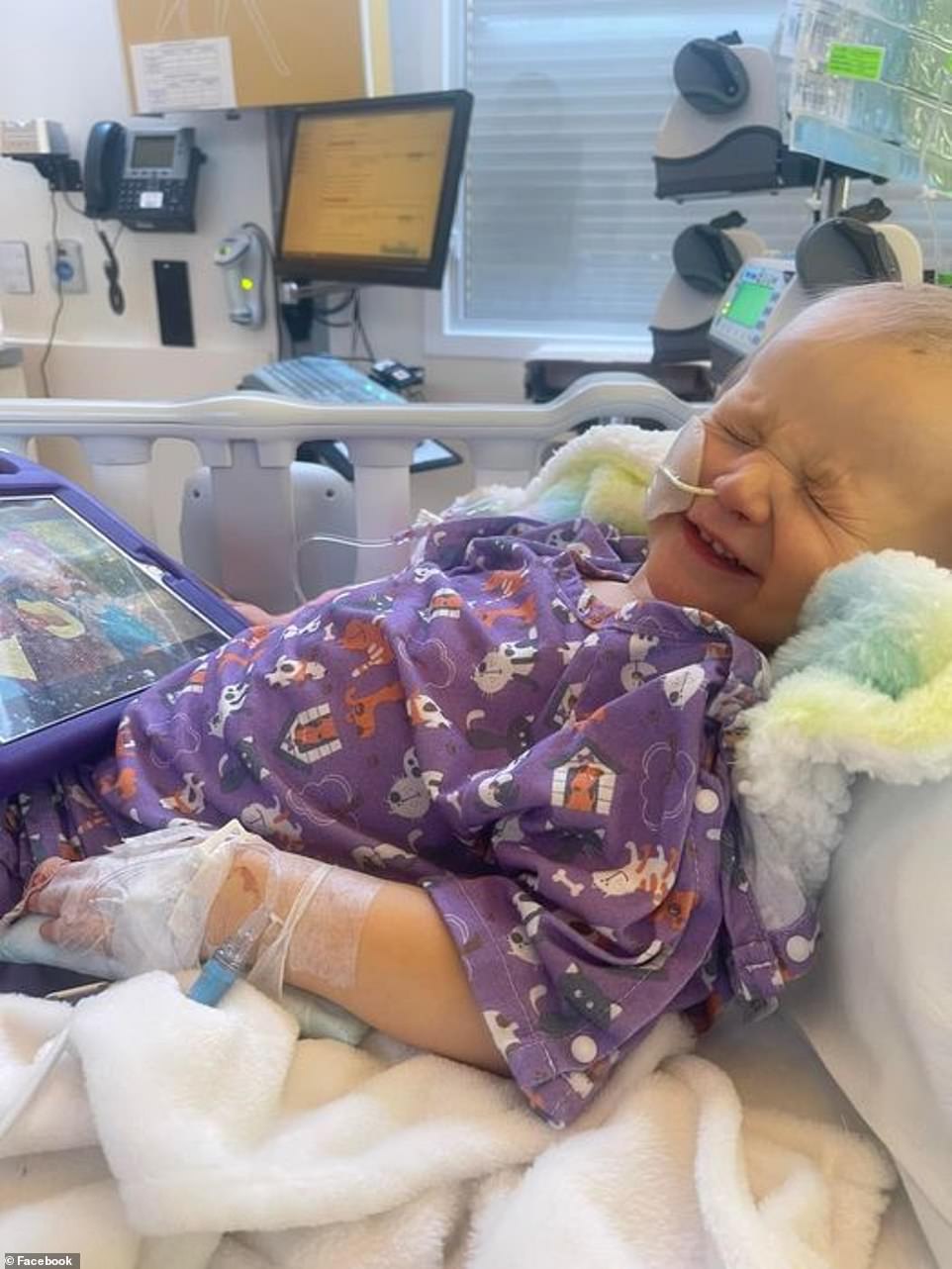 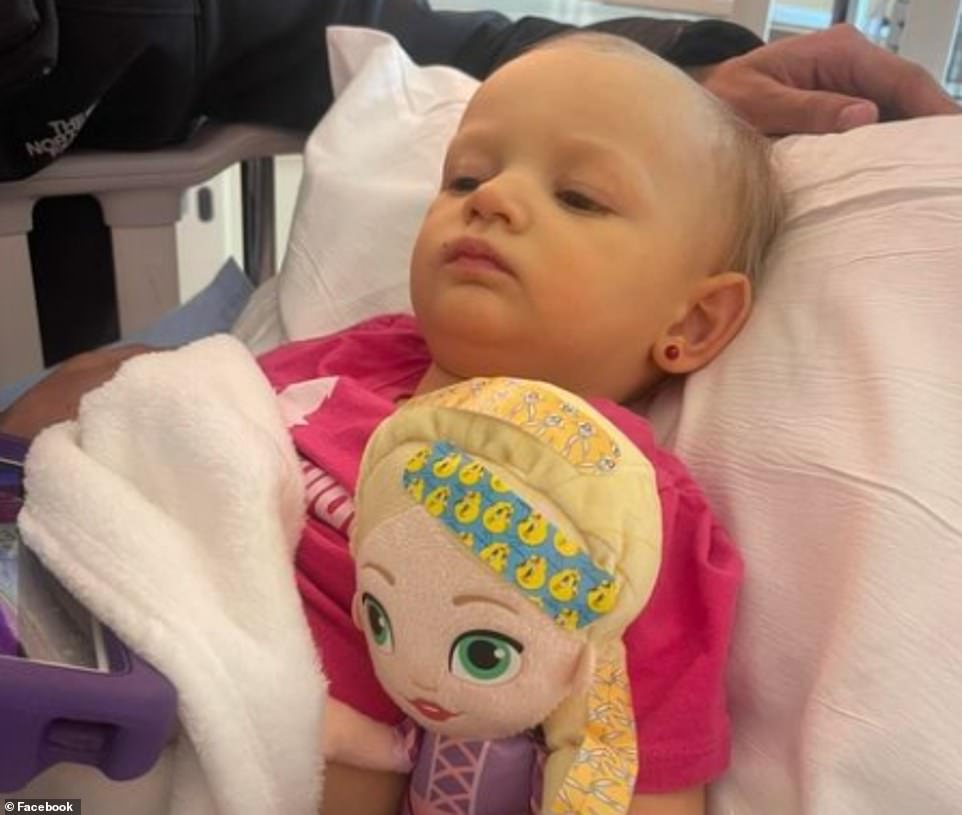 Baelyn is pictured after she was admitted to hospital, but before her transplant. Doctors remain mystified as to how Baelyn contracted the condition. She had COVID in December, and also tested positive for adenovirus – but that virus was not picked up in her liver

That is an unusually high number, according to Dr Chinnakotla.

‘Her eyes didn’t look like they were attached to her head anymore,’ Kelsea said of Baelyn’s condition as she was wheeled in for the live-saving surgery on May 5.

‘They were just rolling all over. She would still ask for bananas and ask for juice and ask for snuggles, kind of like she’s still there, but not really.’

The stricken mother added: ‘Slowly watching her deteriorate like that, like her muscles, she would start shaking, and she had a hard time sitting up, and she couldn’t hold her head up, and just watching her go through that was like, “This is not my kid.” Like, am I ever even going to get her back?’ 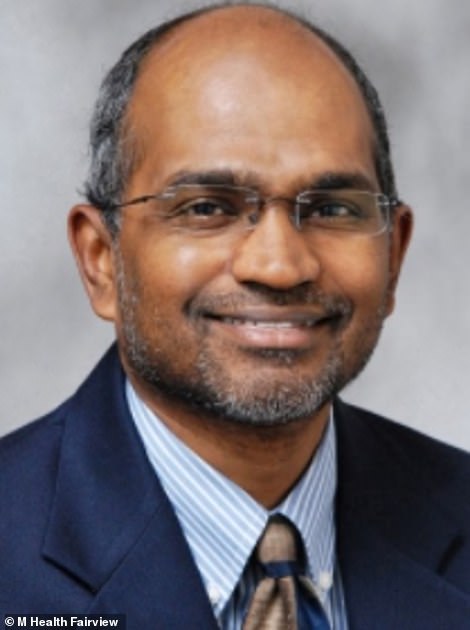 Baelyn spent eight and a half hours undergoing surgery, which saw Chinnakolta and his team gently modify the donor liver so it could fit into the toddler’s smaller abdomen.

He said that on opening up the youngster for surgery, it was immediately obvious that her liver had been badly damaged.

Kelsea was delighted with the immediate improvement after her daughter’s surgery, saying: ‘She came back from surgery, and she wasn’t yellow anymore.’

But Baelyn still faces a grueling recovery that is anticipated to take at least a year, including two months in hospital.

The youngster is now awake, being weaned-off pain relievers, and having physical therapy to restore her lost strength.

Doctors say she is recovering well.

Explaining the stress the ordeal has wrought on her family, Kelsea said: ‘I think we tried our hardest to make sure we were sleeping. We definitely have not slept or ate since the transplant, just anticipating that something bad is going to happen or has happened.’

Doctors have studied Baelyn to try and establish what caused her infection. She was found to have tested positive for the adenovirus, a condition which some scientists believe may be linked to the outbreak.

But the adenovirus was only found in Baelyn’s blood, not her liver. That may be because her liver was too damaged by the time it was examined, but doctors are still none the wiser as to why she got infected.

Researchers are also examining whether the hepatitis outbreak may be linked to COVID-19. Most of the youngsters struck down are under-5, meaning they’re too young to have received a vaccine.

Baelyn and the rest of her family contracted COVID shortly after attending Laramie’s funeral.

And some doctors are now keen to perform antibody tests on child hepatitis sufferers, to see whether COVID shows up in their systems.

EXCLUSIVE: Mysterious hepatitis outbreak in children will continue ‘throughout the summer’ and many cases remain undiagnosed, expert warns – as global death toll rises to 12 including five deaths in America

by Luke Andrews for DailyMail.com

America’s outbreak of mysterious hepatitis will continue ‘throughout the summer’ and many cases are already undiagnosed, a top virologist warned Friday — as the global death toll hit 12 with five fatalities in the United States.

Scientists are puzzled by the cause, but leading theories suggest a type of adenovirus spread by touching feces-contaminated surfaces is behind the illness.

Dr Matthew Binnicker, the director of clinical virologist at the Mayo Clinic in Minnesota, told DailyMail.com cases will continue to crop up throughout the year as its transmission does not ‘tend to be seasonal’.

He warned schools and day care centers — where many children mix — were major hubs for spreading the virus.

Dr Binnicker also warned many hepatitis cases among children remain undiagnosed in the U.S. because, in some cases, children will not have been unwell enough for their parents to take them to a doctor or hospital.

The majority of children with the mysterious hepatitis in the U.S. have tested positive for adenovirus, but it is not clear whether the virus itself is causing the illness or the infection alongside another factor such as a previous Covid diagnosis.

Adenoviruses are relatively common among children, but until this year were rarely associated with hepatitis. The common causes of the illness — hepatitis viruses A, B, C, D and E — have all been ruled out.

At least 12 children have now died from the mysterious hepatitis worldwide, with five fatalities also reported in Indonesia and one each in Ireland and Palestine.

More than 110 cases across 26 states have been registered so far, with 15 children becoming so severely ill they needed a liver transplant.

Globally, there have been 450 cases reported across 21 countries mostly among children under 10 years old. Most are in the UK (160), which first spotted the outbreak. 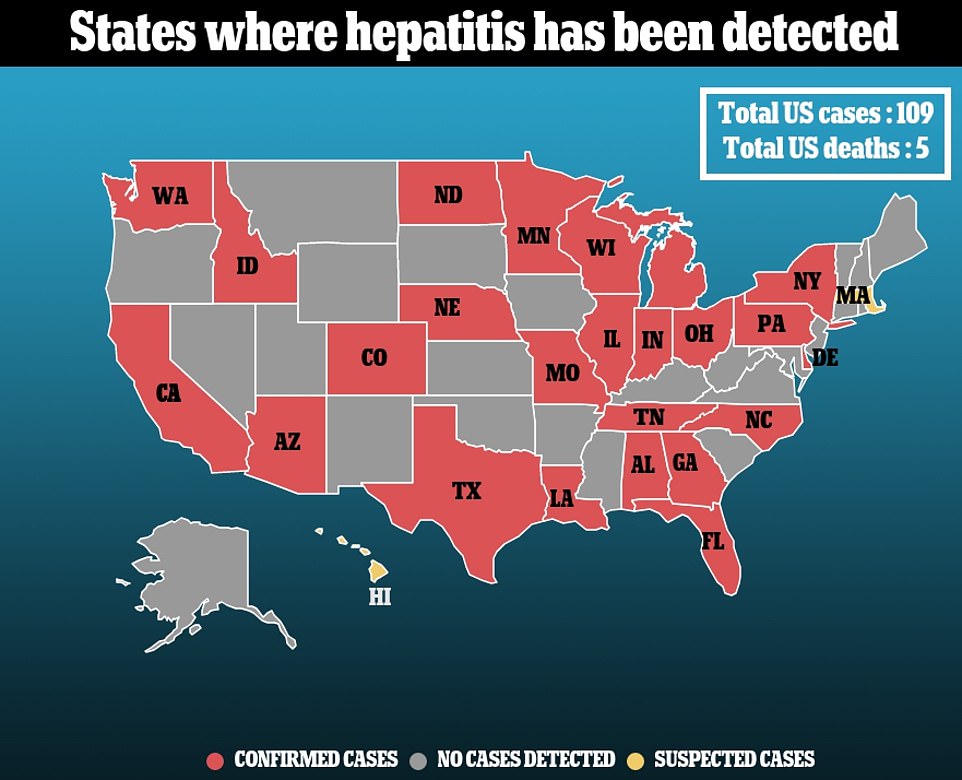 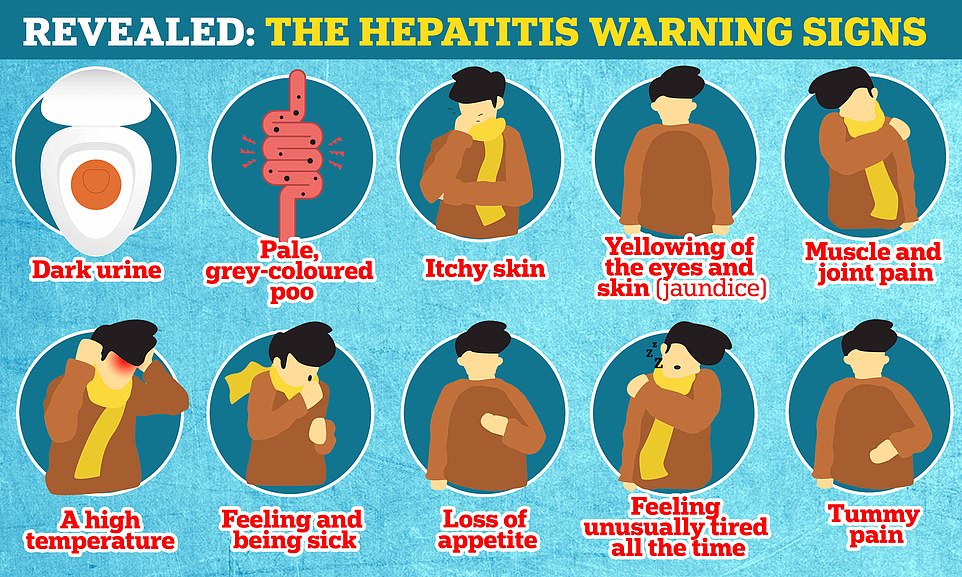 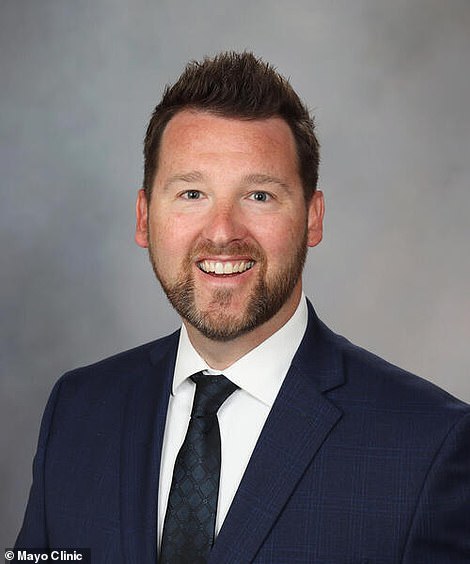 Dr Matthew Binnicker, a clinical virologist at the Mayo Clinic, warned cases would continue to crop up this year

Speaking exclusively to DailyMail.com, Dr Binnicker said: ‘I would not be comfortable saying this outbreak has peaked.

‘This type of adenovirus we don’t tend to think of as seasonal, we will continue to see cases throughout the year.’

The adenovirus most children with mysterious…

Read More: PICTURED: South Dakota girl, 2, who had to have liver transplant after contracting

Monkeypox no cause for panic

Monkeypox can be contained if we act now, WHO says

Monkeypox outbreak: What to know about symptoms, threat

Vaccines may not prevent many symptoms of long covid, study suggests

What is monkeypox, its symptoms and threat to you?

Mario Strikers: Battle League Will Be Supported With Free Post-Launch…

Why Was Depp-Heard Trial Televised? Critics Call It ‘Single Worst…

‘Stranger Things’ stretches out its run toward the finish…