Dollar stays broadly pressured today and it’s set to end as the worst performer for the week. PCE data offered some hope that inflation has finally topped. Broad risk sentiment is steady as US stocks could extend rebound in the final session of the week. Benchmark treasury yields are also trading slightly lower. Buying focus has turned to commodity currencies today, as led by Aussie. European majors are also slightly weaker with Yen.

Technically, 1.2712 support in USD/CAD is an immediate focus, as WTI crude oil is also extending rally too. Break of 1.2712 will argue that rise from 1.2401 has completed at 1.3075. More importantly, that came after rejection by 1.3022 long term fibonacci resistance. Deeper fall could be seen back towards 1.2401, and rise the chance that whole rebound from 1.2005 has finished. That, if happens, would be a bad sign for the greenback. 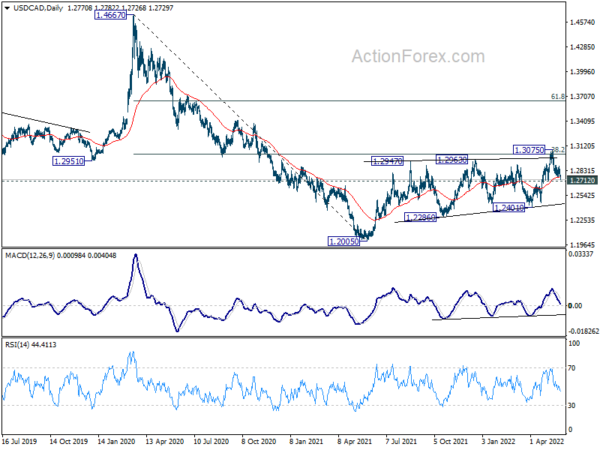 Bundesbank Nagel: We must make the first rates move in July

In a Der Spiegel interview, Bundesbank President Joachim Nagel said, “in our June meeting we must send a clear signal where we’re going. From my current perspective, we must then make the first rates move in July and have others follow in the second half of the year.”

Earlier this week, ECB President Christine Lagarde has already indicated, “we’re moving (deposit rate) very likely into positive territory at the end of the third quarter… When you’re out of negative (rates) you can be at zero, you can be slightly above zero. This is something that we will determine on the basis of our projections and … forward guidance.”

BoJ Governor Haruhiko Kuroda told the parliament today that core inflation (all items excluding fresh food) is “likely to remain around 2% for about 12 months”, unless energy prices drop sharply.

However, he emphasized that “prices won’t rise sustainably, stably unless accompanied by wage hikes.” That’s seen as in indication that recent rise in inflation is not enough to lead to exit of the ultra-loose monetary policy.

Also from Japan, Tokyo CPI core was unchanged at 1.9% yoy in May, below expectation of 2.0% yoy.

ABS said: “The strength in retail turnover is being driven by spending across the food industries. High food prices have combined with increased household spending over the April holiday period as more people are travelling, dining out and holding family gatherings. 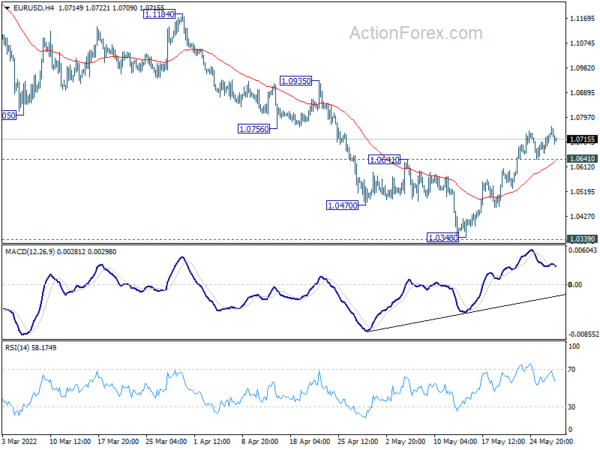 Jacksonville immunologist on travel and COVID: ‘A much better spot…