‘MANAGED COMPETITION’:
A US official said that the meeting might include discussions about ‘guardrails’ on Washington-Beijing ties to avoid miscalculations

The US has briefed Taiwan before a scheduled meeting between US Secretary of State Antony Blinken and Chinese Minister of Foreign Affairs Wang Yi (王毅) on the sidelines of a G20 conference in Indonesia later this week, the Ministry of Foreign Affairs said yesterday.

Ministry spokeswoman Joanne Ou (歐江安) told the Central News Agency that Taipei and Washington remain in close contact, especially ahead of high-level meetings between US and Chinese diplomats, to safeguard Taiwan’s interests.

As per Washington’s usual practice, the US briefed Taiwan on the meeting before the US Department of State announced on Tuesday that Blinken and Wang would meet in Bali during the G20 Foreign Ministers’ Meeting to be held today and tomorrow, Ou said. 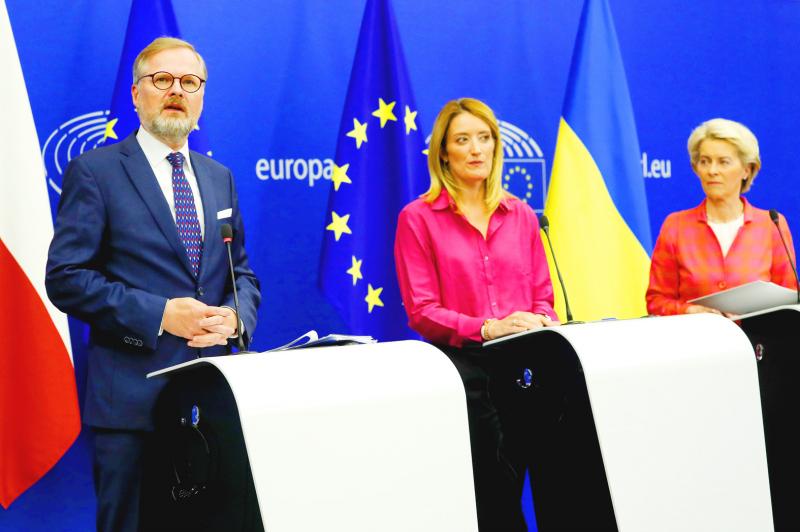 The US would also brief Taipei following the meeting, as it always does, Ou said.

She refused to disclose details of the briefings, citing an arrangement and mutual understanding.

Her remarks came after the department on Tuesday said that Blinken would travel to Bali and Bangkok from yesterday to Monday next week.

In a telephone briefing on Tuesday, US Assistant Secretary of State for East Asian and Pacific Affairs Daniel Kritenbrink said that Washington’s top priority during the meeting is to underscore its commitment to maintaining “open lines of communication with the People’s Republic of China [PRC].”

“We have often stated that our goal is to manage responsibly the intense competition between the United States and the PRC. So I would expect that in the course of that meeting we’ll be able to discuss having guardrails, so to speak, on the relationship, so that our competition does not spill over into miscalculation or confrontation,” Kritenbrink told reporters.

It would be the second in-person meeting between Blinken and Wang following their meeting in Rome in October last year.

In other news, the ministry in a statement on Tuesday thanked the European Parliament for passing the Report on the Indo-Pacific Strategy in the Area of Trade and Investment, which calls on the European Commission to launch negotiations with Taiwan on areas of economic cooperation.

Taiwan and the EU share “core values of democracy, freedom, human rights and the rule of law,” the report says.

Taiwan would work closely with the EU toward a substantive, mutually beneficial relationship, and would become a reliable trade and security partner to the EU in the Indo-Pacific, it says.

The report emphasizes trade with Taiwan in the areas of medical supplies, the digital economy and semiconductors, and green technology.

Elon Musk: Tesla Sold Its Bitcoin Because of COVID Lockdowns in China – Decrypt

How China became ground zero for the auto chip shortage

Ukraine Live Updates: Zelensky Shakes Up Government, Seeking to Crack Down on…