Upon visiting the Netherlands, Edie Mukiibi, since recently President of Slow Food International, shared his reflections, crucial for our way forward in creating a Good, Clean & Fair food system

Edie Mukiibi visited the Netherlands at the beginning of June, at the invitation of Slow Food the Netherlands. With work experience in 32 African countries, Edie has a clear understanding of the impact of the global food system on local African communities, in a variety of contexts. According to Edie, it is crystal clear that we need to rethink our food systems at every level. We need to regenerate communities and empower them to reclaim food sovereignty. Being the 2nd biggest in agricultural exports worldwide (1), there is a notion in the Netherlands that it has a responsibility to feed the world. Edie Mukiibi’s answer to that notion is simple: “The best way to feed the world is to let communities feed themselves. They’re pretty good at that, actually.” 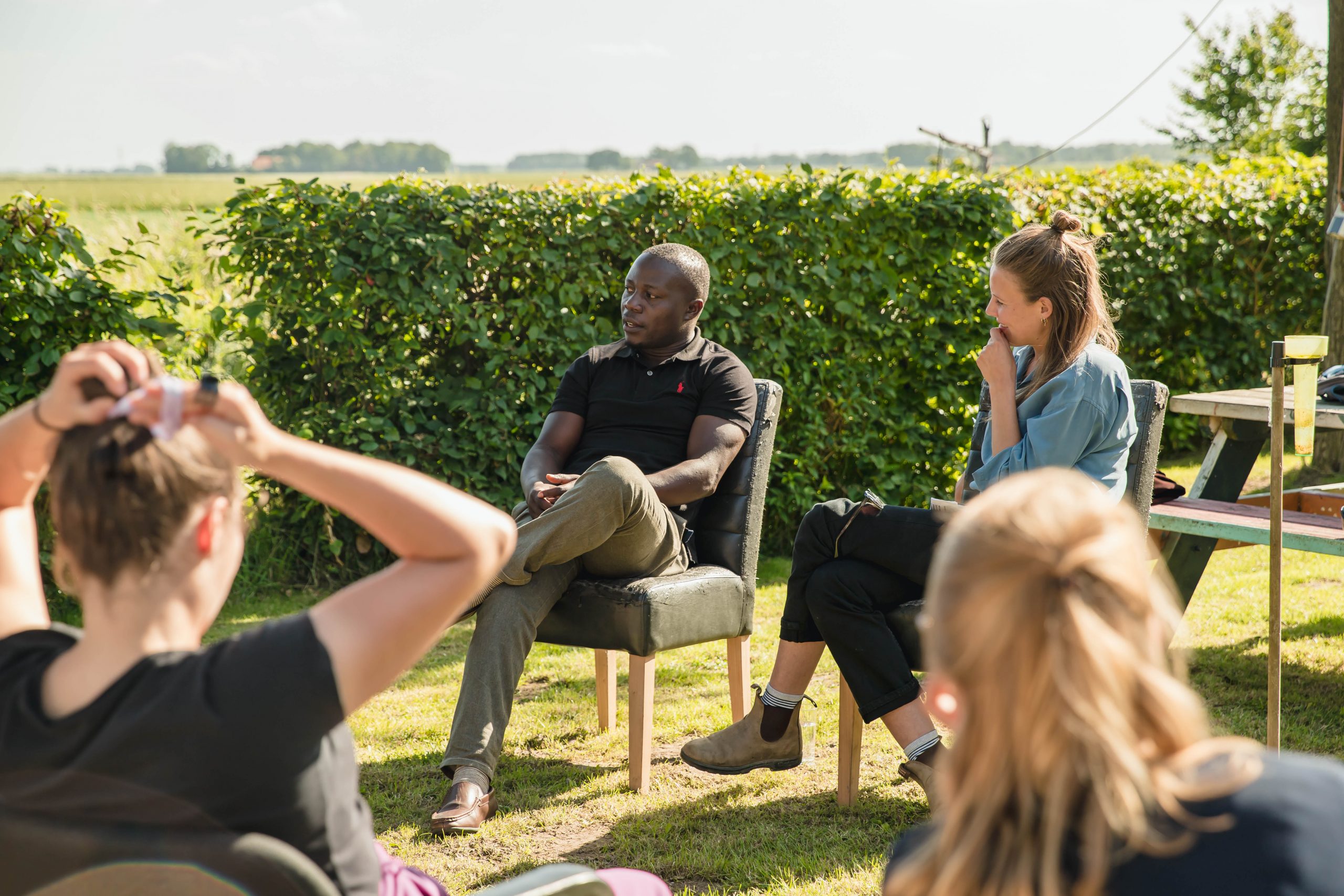 Reflections: how did we get here?

During the visit last June, Edie got to meet with a diverse group of people engaged in the transition toward a Good, Clean & Fair food system. The various people he met operate on a local, national or even global level; he talked to local producers, Dutch Slow Food communities, participants of the Slow Food Youth Network (SFYN) Academy, and representatives of various international organizations at the Voedsel Anders Conference in Wageningen. The common thread in these encounters: how should we move forward with our food systems*? Edie shared countless situations he witnessed, in which the devastating effect of the food system on communities across the African continent are very clear. Edie: “The global food system has been designed in such a way that it is now cheaper for communities in Ghana to buy chicken that has been imported from Germany than to raise their own. This is one of the results of subsidized over-producing industrial farms dumping their produce on the world market for prices so low that local farmers cannot possibly make a living and sustain their farming operations.” Another striking example: EU-Funded European trawlers are fishing off the coast of West Africa (1). Large amounts of the small fish they catch get processed into fishmeal, which then gets exported to Europe to be used on fish farms, effectively threatening the food security of many West African communities that are reliant on these small fish.

The current global food system is highly complex, and to be able to understand and improve it, we need to reflect. Edie explains: “In order to make improvements, we first need to reflect on how we got here. How did we arrive at the undemocratic mess we call a food system? Many structures of our current global food system were put in place to facilitate colonial trade and resource extraction. One crucial part of that system is plantation farming.”

Today’s young people are the future of our food system. Edie shared his vision of the global food system with a group of young enthusiasts at the SFYN Academy: “The best way to feed the world is to let communities feed themselves.” This is particularly relevant for vulnerable communities in the global South. “The currently dominant approach is imposing industrial agricultural models top-down upon communities in the global South, as is happening in many countries in Africa. This approach stems from the deeply patronizing idea that such communities are unable to feed themselves, and thus should adopt the post-green revolution industrial way of food production. Over millennia, people all over the world have created food systems in relative equilibrium with their surroundings. We must let those peoples reclaim their food sovereignty. We must empower communities to feed themselves.” This is particularly relevant in relation to pressing issues such as climate change and loss of biodiversity; in Edie’s home country of Uganda and many other African countries, highly diversified agroecological farming systems are the norm. Edie: “This way of farming is under threat by large land acquisitions by foreign investors for plantation farming of tea or sugarcane and even woodlots for carbon trade.”

Throughout Edie’s journey along the Dutch farmlands, cities, and seaside, there was one recurring question: “What can we do here, from the Netherlands?” First and foremost, Edie argues that “we need to rethink the relationship between the global North and global South. Initiatives like the partnership Slow Food Uganda has with Slow Food Netherlands are the perfect example of that.” Such partnerships are based on sharing experience, knowledge, and practices, all while letting the implementation of said knowledge and practices up to local organizations and communities. “Secondly,” Edie continues, “we should challenge our institutions. Whatever investments they make outside of your country, that is your money, too. Ask yourself: what are my leaders doing in the rest of the world? Where is my money going in the rest of the world? Challenge your leaders, and let your voice be heard.” A final, very practical way of helping is simply by supporting the Slow Food Gardens in Africa project. Since the start of the project, more than 10.000 gardens have been established at schools across the African continent, empowering communities on their way towards food sovereignty.

There is still much work to do. Yet, with Edie Mukiibi as the new president of Slow Food International, surrounded by a strong team of activists from around the world, the movement is stronger and more hopeful than ever. As far as Edie is concerned, it is now time for Slow Food to step up and reach out. To connect with those who are not yet part of our ‘family’.

Read More: The best way to feed the world is to let communities feed themselves – Slow Food

Yes, You Can Absolutely Make Apple Fritters in a Dutch Oven!

12 tips for healthy eating on a budget

5 summery shrimp recipes that are quick and full of flavor